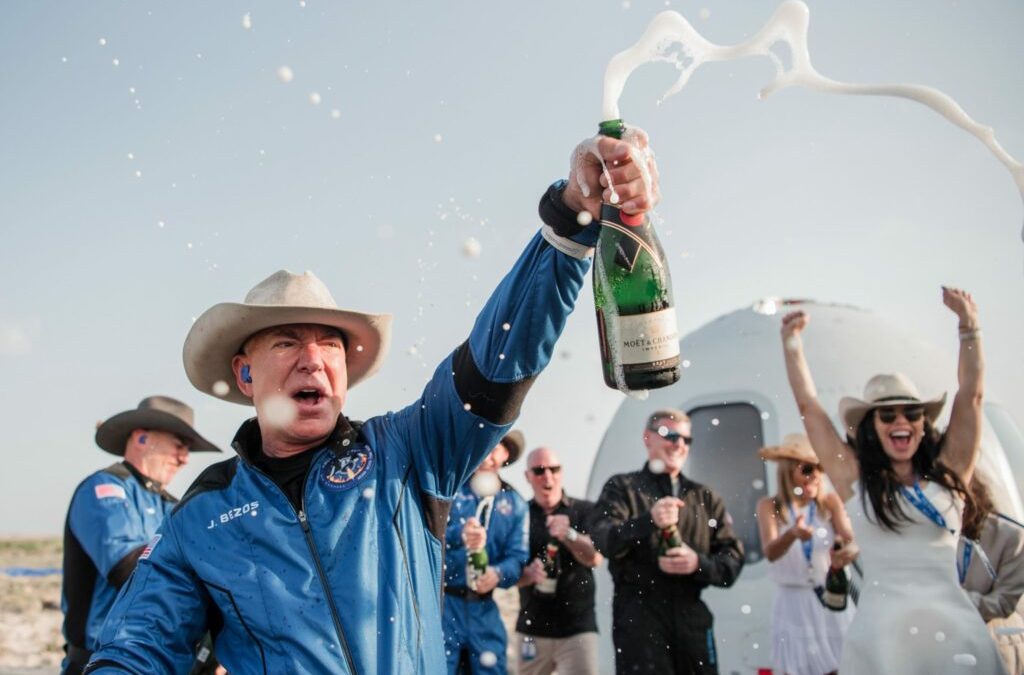 From rocket tests to planetary defense, 2021 has been an eventful year for the space industry. Join the FLYING staff as we look back at our top five space stories of the year.

This year saw the world’s first of many all-civilian space flights, led by SpaceX’s Inspiration4 mission. The three-day mission took its passengers all the way into orbit, surpassing the heights of similar launches by Blue Origin.

This mission marked the beginning of a year full of civilian spaceflight, paving the way for the commercial space industry. Thanks to these developments, a pilot or similarly trained professional is no longer needed to fly alongside customers.

This year was also packed with other celebrity trips into orbit, including Michael Strahan and Alan Shepard’s daughter, Laura Shepard Churchley.

Bezos was able to personally take the trip up to space, an apparent trend-setter, after billionaire Sir Richard Branson rode on his Virgin Galactic spaceflight dubbed “Unity.” Between Bezos, Branson, and Elon Musk, this year has been highly regarded as the beginning of the “billionaire space race.”

In the past six decades, about 11,000 satellites have been added to Earth’s orbit. [Credit: Adobe Stock]

While the amount of space operations around the globe continues to grow, Earth’s orbit has become littered with space junk, which could spell trouble for the International Space Station and future missions. FLYING spoke with space debris expert Brian Weeden to break down the situation.

According to consulting firm McKinsey & Company, nearly 70,000 satellites could be added to low-Earth orbit. The count is already rising, thanks to SpaceX’s ever-growing Starlink population.

An Illustration of NASA’s DART spacecraft and the Italian Space Agency’s (ASI) LICIACube prior to impact at the Didymos binary system. [Credit: NASA/Johns Hopkins APL/Steve Gribben]

NASA is shooting one of its spacecraft at a binary asteroid—yes, you read that right. NASA’s DART mission is the first major mission for its planetary defense division, seeking to redirect an incoming asteroid as it passes by Earth.

While the asteroid poses no threat of impacting Earth, NASA’s DART spacecraft will hurdle toward the smaller of the two bodies at nearly 15,000 mph. Even though the spacecraft is 100 times smaller than its target, NASA hopes to change its trajectory by less than one percent—enough to make a huge difference down the road.

The Soyuz MS-18 crew ship, carrying Soyuz Commander Oleg Novitskiy and spaceflight participants Yulia Peresild and Klim Shipenko, is pictured departing the vicinity of the International Space Station as both spacecraft were orbiting 263 miles above the Pacific Ocean off the coast of far eastern Russia. [Courtesy: NASA]

Following the destruction of a Russian satellite in low-Earth orbit (LEO), thousands of pieces of debris were added to LEO and have now become a hazard to other operations, including the International Space Station. The resulting cloud of dangerous debris forced the crew onboard the ISS to take shelter, and even delayed a maintenance spacewalk.

The U.S., along with other space-faring countries, condemned Russia’s actions—as they could endanger astronauts and cosmonauts alike.

FLYING spoke with multiple experts to determine what exactly happened and how the international community will respond to Russia’s “reckless and irresponsible behavior.”

What was your favorite space story from 2021? Let us know in the comments, or tweet us @FLYINGmagazine.

The post 2021 Was a Big Year for Space appeared first on FLYING Magazine.