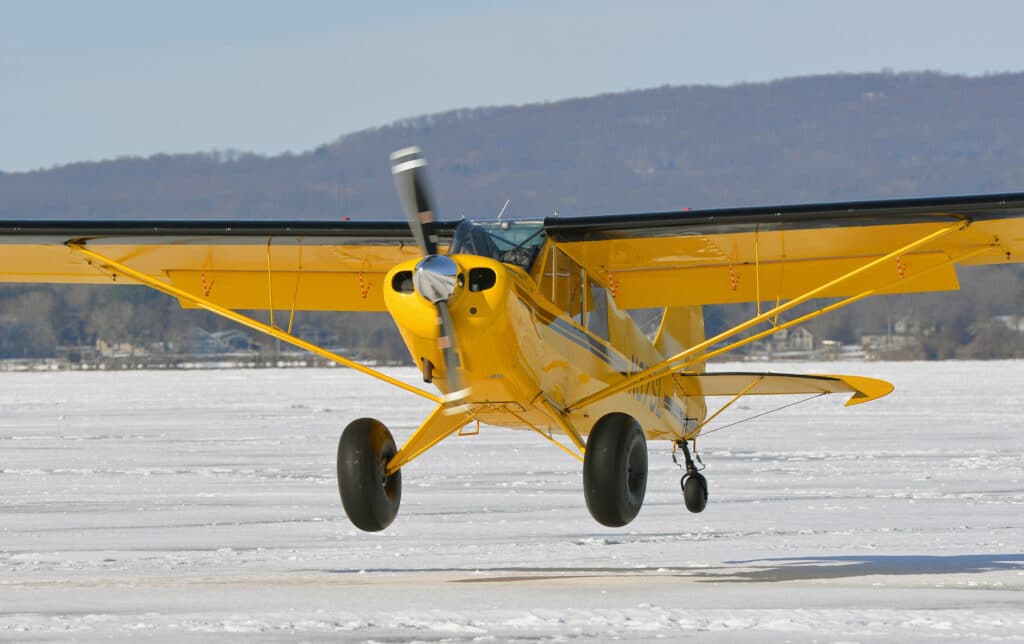 Spring has arrived here in the upper midwest and as per usual, Mother Nature’s erratic mental state can be best described as unstable and hallucinatory. Last week, short sleeves and suntans were widespread, and this morning, we woke up to a snow-covered winter wonderland. Those of us who prefer to fly from grass are left in limbo; the occasionally warm weather makes grass strips inviting, but the waterlogged and snow-covered surfaces are best avoided for the time being.

While we naturally tend to anticipate the approaching summer, I’ve been reflecting on the past winter. As the saying goes, there’s no such thing as weather that’s too cold, only gear that’s unsuitable. To a certain extent, the same holds true for airplanes, and as some friends of mine demonstrate every winter, the right equipment can turn an otherwise harsh environment into a legitimate playground.

As the saying goes, there’s no such thing as weather that’s too cold, only gear that’s unsuitable.

Looking back, one of my favorite winter experiences involved a day spent landing on a frozen lake in rural Wisconsin with my friends Jim and Ross. Those guys are the pilots I aspire to be, experienced and capable tailwheel pilots, proficient at assessing off-airport landing sites and flying into and out of them safely. While I have many years to go before I even begin to approach their level, I’m fortunate when they invite me along for the ride.

On this particular day, we decided to meet up and go flying after an overnight snowfall. The storm had moved on, and high pressure had replaced the dreary gray landscape with a crisp backdrop of blue and white. Although the temperature had dropped into the low 20s, the wind was mercifully calm and it was a perfect day to fly.

When I showed up at Jim’s hangar, he tossed me a couple of disposable heat packs for my boots. His Cessna 170 did have a functioning heater, but it couldn’t quite keep up with the frigid temperatures. After getting the heat packs properly positioned above my toes, we pulled the 170 out of his hangar and hopped in.

Jim’s 170 is perfectly set up for backcountry adventuring. The original 145 horsepower Continental has been replaced with a 180 horsepower Lycoming, and the carbon fiber, constant-speed propeller pulls the airplane out of the shortest strips with ease. When it’s time to land, a full set of low-pressure tundra tires provides enough floatation to utilize landing areas that would cripple my 170 shod in its original small tires.

READ IT FROM THE BEGINNING: Previous editions of “The New Owner”

Floatation can only go so far, though, and as we taxiied onto the snow for takeoff, we could hear the tires breaking through the frozen top layer and into the soft powder below. That frozen crust was creating a lot of drag and brought us to an immediate stop when Jim reduced the power to idle. I figured the 170 would struggle to free itself from the stuff.

After smoothly applying full throttle, Jim released the brakes and my head instantly snapped back from the thrust. The airplane accelerated in the crusty snow far more quickly than my stock 170 does on smooth pavement, and with an expertly timed pull of the flap lever, Jim popped us up and into the air in what seemed like an absurdly short distance. We seemed to hang in midair briefly as the airplane clawed for altitude and then neatly settled into a cruise climb.

“Man, it took forever to get off!” exclaimed Jim.

“Yeah, that must have been at least 250 feet,” I replied sarcastically. I imagined myself in my stock 170, flailing in the snow like a fat man in roller skates.

After takeoff, we joined up with our friend Ross in his bright yellow Aviat Husky. Ross and Jim fly together regularly. They’ve made friends with numerous landowners in neighboring counties and have open permission to utilize dozens of makeshift strips on their days off.

A short formation flight later, we saw our destination for the day, Lake Wisconsin. The 7,200-acre lake is a favorite of fishing enthusiasts year-round—a record 57-pound carp was caught there in 1966. From a distance, we could see a smattering of shanties on the ice with snowmobiles and pickup trucks parked nearby.

The presence of 6,000-pound trucks provided confidence that the ice was indeed thick enough to support the weight of our 2,000-ish-pound airplanes. As we performed a few low passes to inspect the surface of the ice, a pair of snowmobiles took it as a challenge and raced alongside from a distance. They ultimately lost the race, such as it was, but left with a great story to tell their friends over dinner that night.

The lake presented a fascinating blend of challenges. Gone were the usual runway concerns; with over eight miles of length and two miles of width, we had plenty of space and no obstacles with which to contend. Similarly, the surface was just as flat as can be, with no hills or off-camber surfaces to throw us off.

The lake did present other concerns, however. Chief among them was the surface itself. Rather than a smooth, Zamboni-grade surface upon which to land, the surface was littered with ice chunks and ridges the size of tennis shoes. As I considered the hazard the surface would present to aircraft with small tires, I was thankful for the massive 29-inch tundra tires that adorned our aircraft.

Sure enough, as Jim smoothly touched down in the center of the lake, the tires soaked up the imperfections beautifully. I had been bracing for a harsh beating, but was provided with a plush, pillowy-smooth ride. The combination of thin rubber and absurdly low pressure completely tamed the behavior of the airplane as we landed on the oddly-textured surface.

In addition to opening up off-airport destinations like this, it occurred to me that the tires could also be considered a safety feature; their capability could legitimately save the airframe during forced landings on challenging terrain. I made a mental note to demand lower insurance premiums from my broker when I eventually installed a set on my own airplane.

Hopping out of the airplane and onto the surface of the lake, I felt like an Apollo astronaut stepping onto the surface of the moon. It indeed felt otherworldly to walk in such a foreign place, on a surface untouched by any other humans. Adding to the eeriness was the hollow sound of the ice beneath us popping and echoing as unseen, submerged sections fractured and shifted.

We hung out for a bit and enjoyed the unique scenery. Jim grabbed the ice auger from the baggage compartment and soon confirmed the ice was indeed quite thick. We knew it was safe to land upon, and this exercise was purely educational, enabling us to correlate recent temperatures with current ice thickness.

Accessing and exploring unusual environments is a favorite pastime of many adventurers, and whether they get there via airplane, SUV, or motorcycle, the proper modifications make all the difference. [Photo: Jason McDowell]

Before long, we hopped back into the airplanes and headed back home. In the landing flare, Jim utilized his Horton STOL cuff-equipped wing to its full extent, expertly squeezing every last ounce of lift out of it and settling down onto the ice-crusted snow at the slowest possible speed. Once again, the big tundra tires kept us safe and once again, I admired the selection of performance mods adorning his 170.

As I thought back to my own humble 170, equipped with neither a STOL kit nor tundra tires nor a carbon-fiber propeller spun by 180 horsepower, I reminded myself to enjoy that blank canvas that it was. While it lacked modifications, it oozed with potential.

Like so many other vehicles and pieces of equipment, an airplane can be modified to suit the desired adventure. Interiors can be redone to provide customized comfort. Avionics can vastly improve situational awareness and IFR capability. Speed mods can expand your weekend cross-country radius. And as Jim and Ross demonstrated, off-airport mods can enable you to explore beyond charted airports.