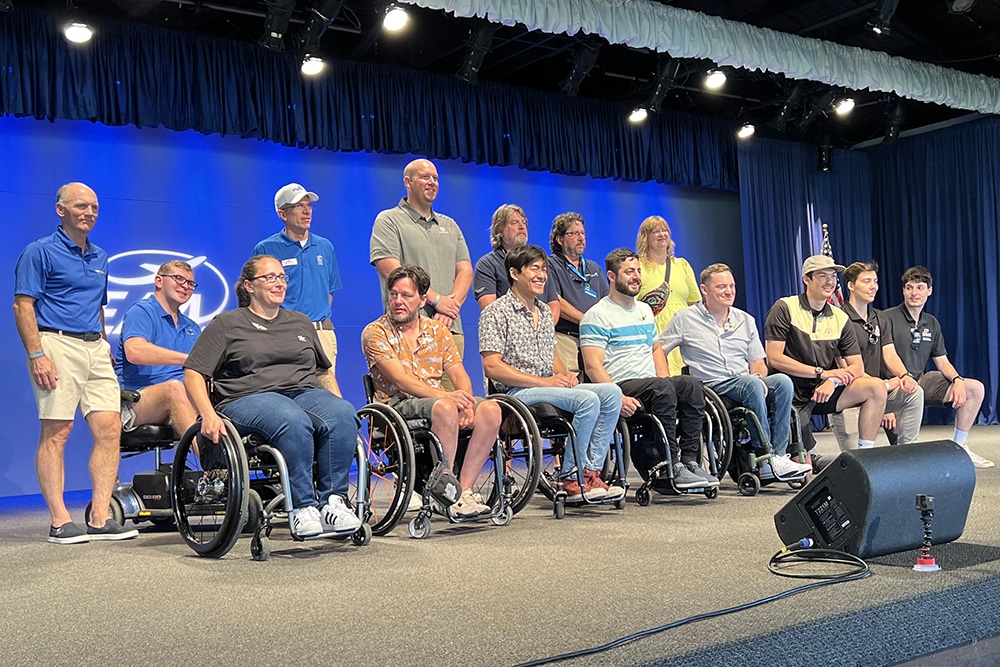 It is always a proud day when a pilot earns their wings, especially when that pilot has been told that, due to a life-altering experience, becoming an aviator is not possible. Since 2006, Able Flight has been helping differently abled persons acquire their sport pilot certificates.

This not-for-profit company offers flight training paid for by scholarships. Each year, the scholarship winners are awarded their wings at AirVenture. This year, the wing ceremony was held at Theater in the Woods.

During the wing ceremony, Able Flight director Charles Stites introduced the class of 2022 to the audience made up of the families of the recipients as well as representatives from the businesses who sponsored the training. The scholarship recipients had their wings pinned on by the scholarship providers, who made the training possible.

Andy Burnette of Florida is a combat-wounded veteran. He was serving as an infantry platoon medic in Afghanistan when a sniper round pierced his spine, leaving him a quadriplegic.

Ryan Chen from California is a paraplegic who uses a wheelchair due to a snowboarding accident in 2009. He is the co-founder of Neurogum, a consumer products company. Chen’s mother made the trip from Japan to see her son get his wings.

Stephanie Cibello from Pennsylvania has been an EMT and is a member of Women in Aviation International. She plans to use her pilot certificate for charitable flying. She uses a wheelchair because of a birth defect that affects her right leg.

Austin “Chance” Field comes from an aviation family. He spent several summers working around airplanes at an FBO operated by his aunt and uncle before serving in the Navy. In 2006, he was paralyzed in a motor vehicle accident.

Nathaniel Miller of Arizona graduated from the University of Arizona with a degree in architecture and is working on becoming a licensed architect. He became a quadriplegic as a result of a diving accident, and has competed in wheelchair rugby on the national level.

Chris Murad of Georgia graduated from Georgia Tech with an aerospace engineering degree. He became paralyzed in 2016 when he was shot during a robbery as he was leaving work. According to Stites, Murad decided to become a pilot because he knew it would make him a better aerospace engineer.

The ceremony recognized the flight instructors who provided the training, and several aviation luminaries, including:

AOPA Director Richard McSpaddenJessica Cox, the world’s first armless pilot, a motivational speaker and as she noted during the presentation—now an aircraft ownerAerobatics champion Patty Wagstaff

The scholarship winners spend six weeks at Purdue University in Indiana where they undergo intensive flight training using light sport aircraft that have been modified to accommodate their limitations.

Able Flight could not function without its sponsors, which include:

To get more information about the scholarship program or to make a donation, visit ableflight.org.