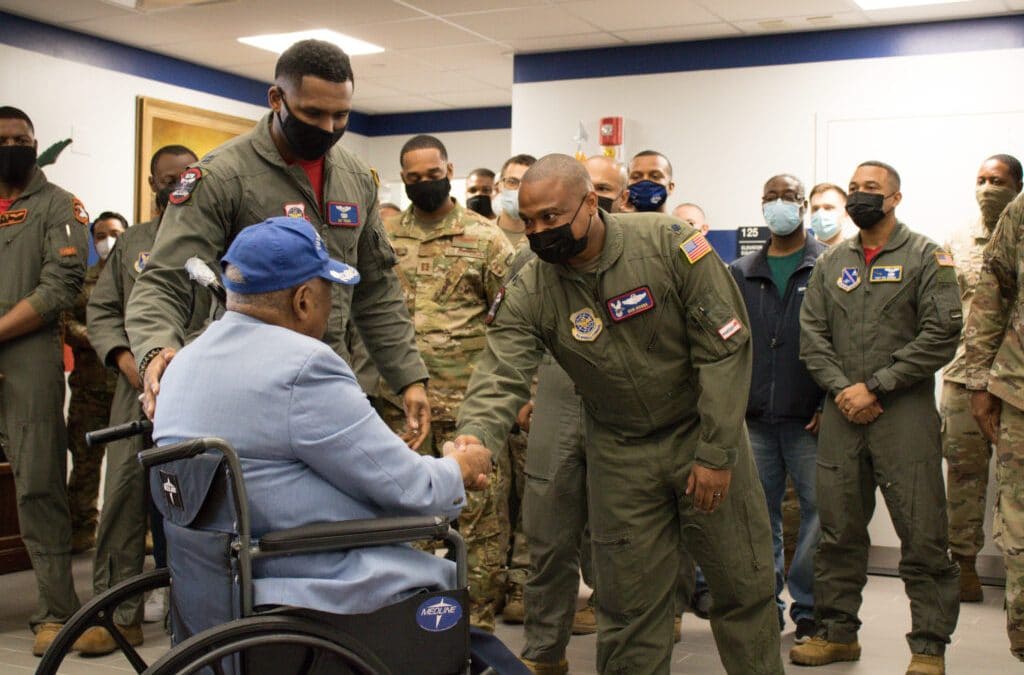 On February 19, Airmen at Joint Base Charleston celebrated Black History Month by hosting one of the largest gatherings of Black military aviators.

Hosted by the Legacy Flight Academy (LFA) at the 437th Airlift Wing, “Accelerating the Legacy” brought together airmen from across the country for professional development, youth engagement, and to honor the history of the Tuskegee Airmen—the first Black military aviators.

Dr. Eugene J. Richardson Jr., one of the original Tuskegee Airmen, attended the event and shared his story with the airmen that he helped inspire.

“Thanks for following,” Dr. Richardson replied.

At a time when the number of Black military aviators has stagnated, the event served as an effort to inspire future aviators of color. More than 100 students were in attendance to hear Richardson’s story, in addition to more than 60 Black pilots, loadmasters, and navigators on base.

READ MORE: Why Are There So Few African American Air Force Pilots?

Many students took to the skies for their very first time, thanks to the LFA’s “Eyes Above the Horizon” program, through which students received hands-on experience in small aircraft. The day was filled with different activities for the students, including STEM enrichment, aircraft static displays, and sessions for college, career, and character development.

That evening during the banquet, Richardson, the guest of honor, shared the story of what inspired him to break the color barrier by becoming a fighter pilot.

“I was a kid of about five years of age, in Mansfield, Ohio, and I saw an airshow put on by five Blackbirds. My father took me to see them,” he said. “We get out there and we see them jump into the sky; diving, climbing, turning, and buzzing, making noise. And then they land, and people get out of them!”

That airshow, held in 1930, was put on by the Colored Air Circus—an all-Black group of aviators. By the time Richardson turned 17, he signed up to take the pilot qualification test with the Army Air Corps in Philadelphia, against his father’s initial advice.

That following year, Richardson would pass the test and begin his historic military career, becoming one of the famed Tuskegee Airmen.

Thomas, president of the LFA, spoke with FLYING about why his organization is so important to the future of Black aviation.

“I would call it a celebration of representation,” he said. “It’s a program that we put together to introduce underrepresented youth to aviation through flight introduction, through mentorship, and through the history and legacy of the historic Tuskegee Airmen.”

Of the more than 100 students in attendance, many were able to take an introductory flight for the very first time. Aliyah M., a high school junior, spoke with FLYING, sharing her advice to other students on building interest in aviation.

“Broaden your life and your whole perspective on what you can do,” she said. “I know me, and I never thought I would even step foot into a plane [or] be interested in those kinds of things, but just being here today, it just shows me you can really broaden your horizons if you want to learn about anything, and if you actually have the willpower to do that, it’ll come true. It’ll happen.”

Young, who led the organization of Accelerating the Legacy, spoke on what the event meant to him personally.

“Today has been a significant relief,” Young said. “There are times when you plan an event and things may not go as planned, and then they go completely awry, but today was one of those moments where the emotion and the effort that we put into making this event happen, we got to see before our eyes… the students now see themselves with the opportunity to fly, cause they actually got to fly airplanes.”

Commander of the 437th Airlift Wing, Col. Robert V. Lankford, told FLYING why Joint Base Charleston was picked for this historic event.

“I want it here,” he said. “Charleston has long been in the C-17 and mobility business—the crown jewel of all things airlift, and I want people to experience that.”

Lankford also emphasized how the event will foster diversity in the military.