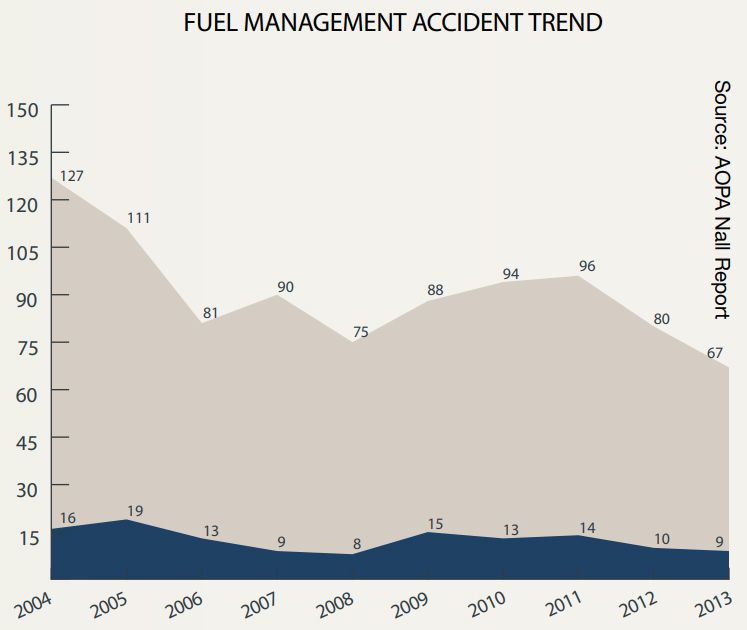 Ensuring there is fuel aboard the airplane adequate for the planned flight is a basic, primary responsibility for any pilot. Unfortunately, the accident record tells us it’s one responsibility not all pilots fulfill. In our experience, fuel exhaustion, starvation or simple mismanagement accounts for a healthy proportion of engine-failure mishaps. This is true despite the event being resolved without anyone except the pilot knowing about it, or the NTSB opening an accident investigation. While fuel-system complexity can be an argument in defense of any failure to meet this basic requirement, it ultimately falls down because ensuring enough of the stuff is aboard and gets to the engine(s) is always the pilot’s responsibility. And you did read the POH/AFM, and perform a preflight inspection before climbing in, right?

Meanwhile, one reason multi-engine airplanes exist is for the peace of mind the additional powerplant(s) bring to the table. Of course, that only works well when we maintain our skills at flying with one engine inoperative, especially in a high-workload environment. Like when shooting an approach in actual IMC. Losing an engine at such a point can end well if everything else comes together. Here’s an example where it didn’t.

On April 22, 2019, at 0851 Central time, a Beech 58 Baron was substantially damaged when it collided with terrain while executing the RNAV (GPS) approach to Runway 12 at the Kerrville (Texas) Municipal Airport (ERV). The airline transport pilot (male, 65) and five passengers died. Instrument conditions prevailed; the flight operated on an IFR flight plan, departing the West Houston (Texas) Airport (IWS) at about 0730. The straight-line distance between the two airports is 178 NM.

At about 0839, the pilot was cleared for the approach and to maintain 4000 feet MSL to the initial fix. According to ADS-B data, the airplane maintained 3900 feet until about 0844:59, when it began a steady descent. At the time, the airplane was about 13 miles from the runway. Data from the airplane’s engine monitor indicate the left engine lost power about 0845, followed by the right engine about 10 seconds later.

The airplane steadily descended well below the approach profile. About 40 seconds after losing power, the left engine regained nearly full power, which it maintained until the end of recorded data at 0851. The airplane slowed below its minimum controllable airspeed (VMC) of 83 knots as it descended from about 500 to 300 feet AGL. A witness saw the airplane on final approach at a low altitude, when it entered a right turn, began a right spiral and disappeared behind a ridge line.

A flight instructor who frequently flew with the pilot and conducted his most recent flight review stated the pilot’s mechanical flying skills were very good but, on occasion, his understanding of technical issues was not as strong. A few times, the pilot did not perform well during unexpected in-flight issues.

Based on passenger weights, the airplane’s takeoff weight was calculated as 5598 lbs. with 50 gallons of usable fuel and 5526 lbs. with 38 gallons of usable fuel. Its maximum gross weight was 5500 lbs. Performance charts indicated a one-engine-inoperative climb capability of about 300 fpm with the inoperative engine’s propeller feathered, flaps up and a gross weight of 5300 lbs. Failing to feather the prop or extending 15 degrees of flaps reduced single-engine rate of climb by 150 and 400 fpm, respectively.

The landing gear was retracted. The left-wing flap actuator corresponded to a 15-degree flap setting; the right-wing flap actuator was fractured. Both electric fuel boost pump switches were in the high position. The throttle, propeller and mixture controls were all near the full-forward position. The left propeller’s blades displayed evidence of rotation at the time of impact. The right propeller was not feathered and was in or near the low-pitch stop position.

The airplane’s fuel system comprised three interconnected fuel cells and one internal tip tank for each wing, for a total capacity of 200 gallons, six of which were unusable. Each wing had two fuel filler caps: one located in each outboard leading-edge fuel cell and one internal tip tank. The airplane’s instrumentation indicated the airplane consumed about 28 gph while at cruise power during the accident flight. According to the NTSB, “high resistances in both fuel quantity transmitters would have caused the cockpit fuel quantity indicators for both wings to read about 5 gallons higher each than the actual fuel present.”

The airplane was fully fueled on April 14 and flew on April 15 and 17, after which 30 more gallons were added. Although the pilot kept a fueling log, the NTSB’s investigation found the fuel on board at the beginning of the accident flight was 12 gallons fewer than the pilot’s records indicated.

The NTSB determined the probable cause(s) of this accident to include: “The pilot’s inadequate preflight fuel planning and fuel management, which resulted in a loss of engine power due to fuel exhaustion. Also causal was the pilot’s failure to follow the one-engine inoperative checklist and maintain the airplane’s minimum controllable airspeed by properly configuring the airplane, which resulted in a loss of airplane controllability.”

According to the NTSB, “multiple errors before takeoff led to a loss of engine power due to fuel exhaustion” and “once the right engine lost power, the pilot failed to properly configure the airplane…and allowed the airspeed to drop below the point at which the airplane could maintain flight.”

Even if the “missing” 12 gallons of fuel had been aboard, the pilot’s flight planning was marginal, and didn’t comply with reserve requirements. Inadequate fuel, coupled with the pilot’s failure to properly manage the engine stoppage, made the flight’s outcome inevitable.

One of the nasty little secrets of personal airplanes is the inadequacy of their fuel quantity indicating systems. The only real way to know how much fuel is aboard is to fill the tanks, and even then some quirks can creep in. According to the NTSB’s Safety Alert SA-067, Flying On Empty, “From 2011 to 2015, an average of more than 50 accidents per year occurred due to fuel management issues. Fuel exhaustion accounted for 56% of fuel-related accidents while fuel starvation was responsible for 35% of these accidents.” The NTSB’s recommendations include:

This article originally appeared in the April 2022 issue of Aviation Safety magazine.