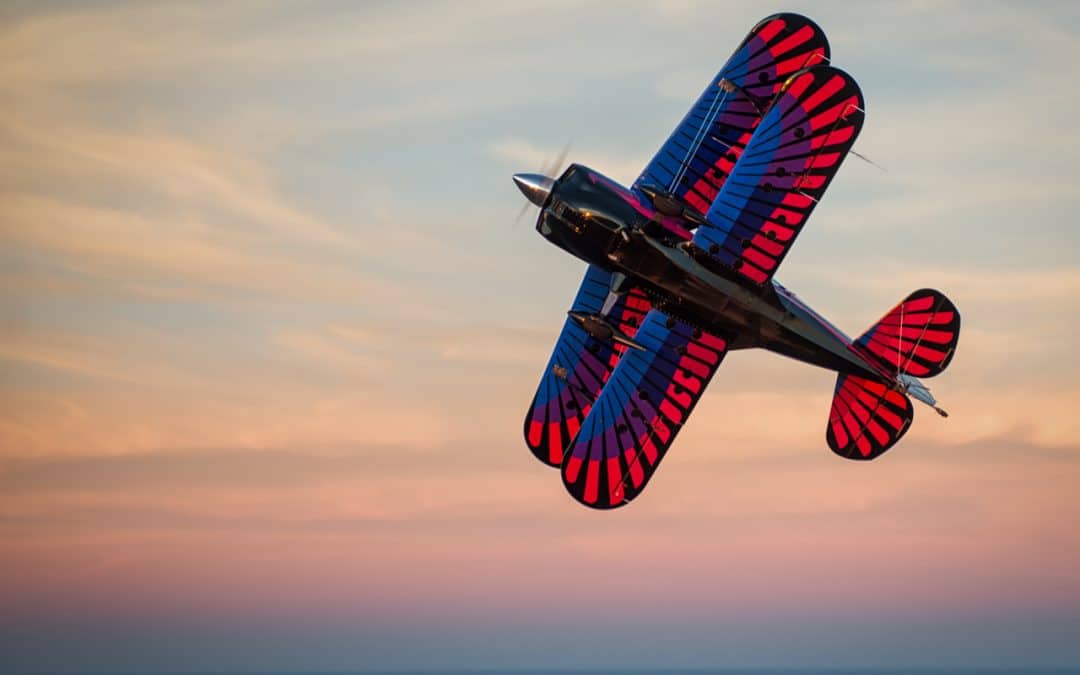 There are many options for aerobatic airplanes that will provide you with the fun, maneuverability, power, and strength required for the sport. Some people fly war-birds, such as the Nanchang CJ-6 and Sukhoi Su-26. Military trainers such as the Stearman are also popular for slow, light aerobatics. However, many warbirds have strict limitations under the experimental exhibition category, so they might not be ideal for your mission.

On the experimental side, there are many terrific airplanes that can satisfy your aerobatic itch. Aviat Aircraft’s Eagle is a popular choice, and Van’s Aircraft offers several capable models in its RV series. If you’re looking to do more advanced aerobatics, MX Aircraft and Zivko Aeronautics, known for the MXS and the Edge, respectively, provide great choices too.

American Champion’s Decathlon is an affordable, fun, aerobatic airplane with a lengthy track record in the industry. With roots burrowing down nearly a century beginning with the beloved Aeronca Aircraft Company, American Champion is known for its high-quality, two-seat tandem taildragger offerings. Several models are currently in production, including versions of the Scout, Citabria, and Decathlon.

While the Citabria models can be used for light aerobatics, the two Decathlon models are better since they are equipped with inverted fuel and oil systems. The Super Decathlon is powered by a 180 hp Lycoming engine, while the Xtreme Decathlon steps it up to 210 hp. Price tags start at $305,000 and $335,000, respectively.

With a length of 15 feet, 6 inches, and a wingspan of 17 feet, 4 inches, the single-seat Pitts S-1T looks like something you could hang off your rearview mirror. However, it is far from a flimsy toy and it will allow you to fly any maneuver in the unlim-ited category. Aviat Aircraft also makes the slightly larger S-2C for those who want to take friends along. In addition to the second seat, the S-2C provides more power: 260 hp vs. 180 hp in the S-1T. Base prices are $401,000 and $357,500, respectively.

Aviat developed out of a company named Call Aircraft, or CallAir, which began in 1939. In addition to the Pitts series and the experimental Eagle, the company is well known for the Husky—a terrific taildragger built for backcountry fun.

Whether you’re flying competitively, for airshows, or just for fun, aerobatic flight creates art in the skies. [Courtesy: Tyson Rininger]

German aerobatic pilot Walter Extra began his vision of creating aerobatic airplanes in 1980 after modifying a Pitts Special to fly in the World Championship. His first design was the single-seat 230 hp Extra 230, designed with a wood-and-glass-fiber wing. Only eight years later, three competitors in the World Aerobatic Championship flew his legendary, two-seat Extra 300. Many aerobatic performers and competitors fly the airplane today and it is widely used in upset prevention and recovery training (UPRT).

Extra Aircraft, based in Hünxe, Germany, produces four single- and two-seat aerobatic models, including the all-composite Extra NG, which achieved FAA certification in early 2021. Base price is 410,000 euros, or roughly $431,000.