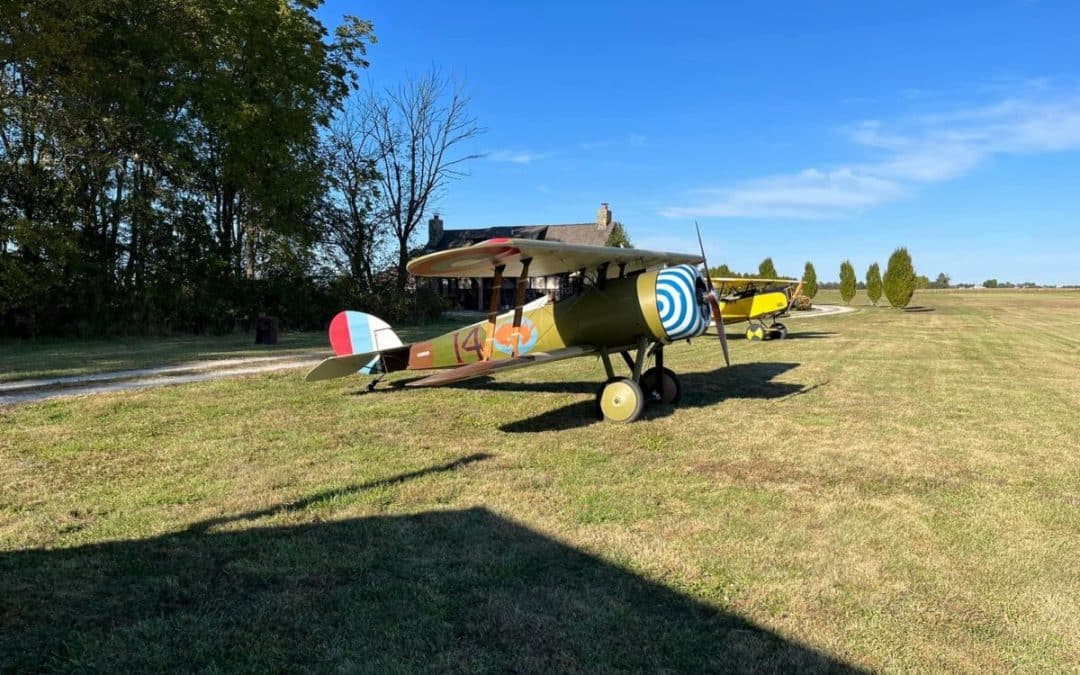 Aside from a change in career trajectory, another change was owning a North American T-28, having previously owned an Aeronca L-16 when he first began flying and a North American T-6 years later. He loved flying the loud radial warbirds, but there were downsides to their power, Turner recalled.

“I grew tired of $500 fuel fill ups in the T-28. It was amazingly high to fuel that aircraft. As a result, I started getting into World War I aircraft. I built a Sopwith Camel, with a more modern engine. I really enjoyed the people, the airplanes, and the history of First World War aviation, so I continued on with this hobby.”

The timing of his new interest conveniently coincided with a move that Turner would soon make across the country. “At the time, I was working as a civilian at Brooks Air Force Base in San Antonio, Texas, and they were moving the section I worked in up to Dayton, Ohio, to Wright-Patterson Air Force Base. I thought, ‘Well, this is the chance for me to do something really crazy,’” he said. “I found 11 acres of land and I decided that I was going to have a little First World War airfield.”

He decided to call the airfield Aerodrome Les Noyers (50OH). With a 1,600-foot-long turf runway, its unique and memorable name was an ode to one of the Great War’s Triple Entente members. This is an homage that Turner has sought to highlight as much as possible throughout the property and its routinely held events.

“I wanted a French name. ‘Les Noyers’ is French for ‘the walnut grove,’ which is what borders the aerodrome—and is a common French town name. After buying the property, I built a wooden hangar, and also built a little French cottage. It almost feels like you are over in Europe. That was the whole goal. I told you I was crazy!” Turner laughed.

“When you come down the property, there is a big, long row of trees, as well as a runway. There is also a 50-foot by 60-foot hangar, a base operations building decorated with period items—and I have a Nissen hut from Wales. This is kind of like a Quonset hut, and in here there is an officer’s club with a little bar, a potbelly stove, as well as tables and chairs. There, we have our little meetings and stuff.”

Another onsite building is useful for Turner’s and others’ ongoing aircraft build endeavors, he said. “I also have a heated building on the property, which is kind of a fabric and paint shop. After we got settled here, I sold the first Camel that I had built and am currently building another. Except, this one is much more historically accurate and has an original rotary engine in it. I’m also building a two-place Nieuport 12, so that we can give rides to people.”

Looks only get you so far—the real appeal of Aerodrome Les Noyers is the action that takes place there. Its location in the Dayton area makes it popular within the WWI aviation interest circle, for a key reason.

Turner said, “The National Museum of the United States Air Force is up near here and they have a World War I fly-in every other year. And we have a smaller, private fly-in here at my place. The event population has ranged anywhere from 75 to 150 participants, and they come from Canada, Europe, and all over. It’s a nice group of people, and we are all kind of amateur historians. During our events, we do formation flying in our World War I replica aircraft, safety instruction, and stuff like that. We keep it very simple and safe here during the fly-ins, but it’s really cool to see a bunch of World War I airplanes flying in formation. You just don’t see that very much.”

“We have one really cool thing that we will do during this time, where we will send up a guy in a Nieuport biplane. What he will do is make very slow, lazy circles over the airfield. Then for everyone else who flew in, we will put GoPros on their airplanes. After briefing, they will try to saddle up for a gunshot, so it’s like gun camera film—but with World War I airplanes. Once they land, we review the film together and vote on a ‘Top Gun’ film. It’s hysterical fun.”

Having given a glimpse into his special aerodrome, Turner proudly summarized its importance.

“We also support period aircraft builders and stuff like that at Les Noyers Aerodrome. So, it’s really just a nice World War I venue for people to fly their World War I airplanes into. I don’t know of any other airfields in the country that are like this one. I know there are some others that focus on the Golden Age of Aviation, that have some World War I airplanes. But I think Les Noyers Aerodrome is the only one of its kind. And, not to mention, we have the only currently flying rotary Sopwith Camel in the Western Hemisphere.”