After Fatal Collision, NTSB Wants FAA to Push for More Use of Common Traffic Advisory Frequencies 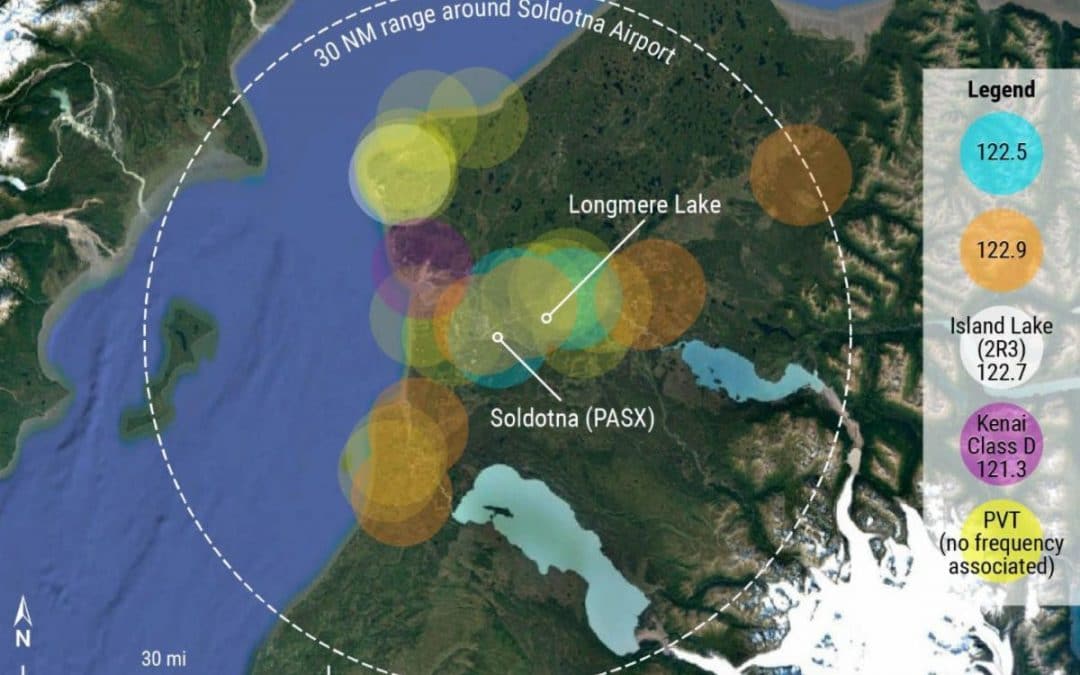 The National Transportation Safety Board wants the FAA to urge pilots to make more use of common traffic advisory frequencies (CTAF) as a tool to avoid midair collisions near non-towered airports.

The recommendation comes from lessons learned during the preliminary investigation into the collision of a de Havilland DHC-2 Beaver and a Piper PA-12 Super Cruiser near Soldotna, Alaska, that resulted in seven fatalities.

The pilot and five passengers aboard the DHC-2 were killed as was the pilot of the PA-12.

According to the NTSB preliminary investigation, on July 31, 2020, the float-equipped DHC-2, with six people onboard departed from Longmere Lake in Soldotna at 8:24 a.m. The charter flight was heading to a fishing camp on a remote lake west of Cook Inlet.

At the same time, the Piper PA-12, operated by a private individual, took off from Soldotna Airport (PASX), bound for Fairbanks, Alaska. The airport is pilot controlled (non-towered) and a common traffic advisory frequency is utilized for pilot communication. The frequency of 122.5 MHz was published on the VFR sectional chart and FAA chart supplement for the area.

According to preliminary flight track data, the DHC-2 was on a northwest heading and climbing at an airspeed of approximately 78 knots.

Meanwhile, the PA-12 was on a northeast heading at approximately 71 knots.

The aircraft collided approximately 2.5 miles northeast of Soldotna Airport at an altitude of 1,175 feet, killing all persons aboard the aircraft.

A witness on the ground told the NTSB that the PA-12 impacted the DHC-2 on the left side of the fuselage toward the back of the airplane, and that he observed what he believed to be the DHC-2’s left wing separate after the impact. The DHC-2 entered an uncontrolled spin to the left.

As a result of an investigation into a midair collision in Alaska, the NTSB recommends the FAA establish common traffic advisory frequencies there. See the full 9-page report: https://t.co/duv7ykI6w9 pic.twitter.com/G9skeeMinF

The main wreckage of the DHC-2 was found in a wooded residential area. The NTSB noted that the wreckage was heavily fragmented, and the debris field was about 300 feet long. There were dark green paint transfers on the DHC-2 consistent with the PA-12.

The PA-12’s exterior registration number identified the airplane as N1904T, and the word “EXPERIMENTAL” was applied to the inside of the lower clam shell door.

However, according to the NTSB, a registration card found inside the PA-12 identified the aircraft as N2587M. A cross-reference with the FAA’s registration database revealed that N2587M was a valid registration for a Piper PA-12 and had been assigned to the pilot/owner of the aircraft.

Additionally, the investigation determined that the pilot of the PA-12 did not have a valid medical certificate at the time of the accident. According to information on file with the FAA Civil Aerospace Medical Institute, the pilot was denied a medical certificate in June 2012 by the Alaska Regional Flight Surgeon due to vision problems. The denial was appealed and sustained in July 2012.

There was no information about the pilot of the DHC-2 in the preliminary report.

The final report on the accident will not be available for several months.

NTSB Recommendations to the FAA

The NTSB did not indicate if either pilot was utilizing the CTAF at the time of the accident.

The agency is recommending that the FAA require all pilots to monitor and communicate their positions on the designated CTAF when entering and exiting dedicated CTAF areas throughout Alaska, as well as near established reporting points and airport traffic patterns within the CTAF area, unless already communicating with air traffic control.

In a statement the NTSB continues, “We also asked the FAA to establish additional CTAF areas in locations throughout Alaska at high risk of midair collisions, designate one frequency that is associated with all non-towered airports within the geographical boundaries of these CTAF areas, and define mandatory position reporting locations and reporting requirements within these areas.

“We concluded that, without a requirement that pilots report their positions on the designated CTAF frequency when operating in CTAF areas, pilots may remain unaware of the presence of other airplanes even though a method of communications exists; thus, the benefits of establishing CTAF areas are not fully recognized.”

The NTSB noted that the prevention of midair collisions, especially in Alaska, has been a focus for the NTSB and the aviation industry for many years.

The post After Fatal Collision, NTSB Wants FAA to Push for More Use of Common Traffic Advisory Frequencies appeared first on FLYING Magazine.