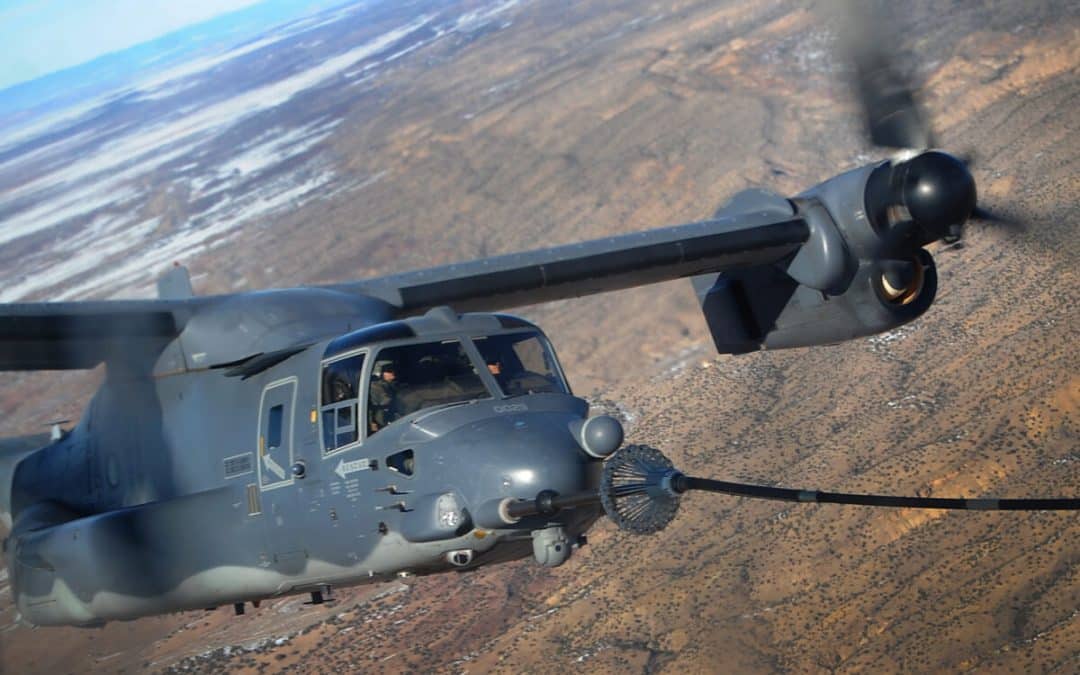 The AFSOC had ordered the grounding of its CV-22 fleet of 52 aircraft on August 16 in order to conduct safety investigations after a string of incidents involving high clutch engagement (HCE). CV-22 operations resumed September 2 “with risk control mitigations in place,” however, the root cause of the HCE issue has not yet been identified, AFSOC officials said.

During the stand down, all AFSOC CV-22 crews were briefed and directed on how to handle HCE incidents, a command spokesperson told FLYING in a statement. Aircraft maintainers are also conducting one-time inspections to verify maintenance data and compare it with physically installed components, and AFSOC is also considering replacing drivetrain components once they reach specific flight hours.

“These mitigation guidelines are focused on flight operations where the preponderance of HCEs were experienced,” the AFSOC spokesperson said. “Until a root cause is identified, and solution implemented, the focus is on mitigating operations in flight regimes where HCEs are more prevalent and ensuring our aircrews are trained as best as possible to handle HCEs when they do occur.”

The HCE issue occurred inside the gearbox that connects the propeller rotor to one of the aircraft’s two Rolls-Royce Liberty AE1107C engines, according to reports. If the clutch slips, the power load transfers to the other engine as designed, but then rapidly transfers back when the clutch re-engages, which could potentially lead to loss of control of the aircraft or an uncontrolled landing.

Four such incidents have occurred in the last five years, two in the last six weeks, Air Force Magazine reported.

The AFSOC first began using the CV-22, which is the Special Operations variant of the Marine Corps MV-22 aircraft, for long-range infiltration and exfiltration missions in 2007.

READ MORE: No Osprey Stand Down for Marine Corps After AFSOC CV-22 Grounding

The stand down was the latest safety concern related to Osprey flight operations this year. In March, four Marines were killed when a MV-22B crashed during a training exercise in Norway.

In early June, five Marines were killed when the MV-22B they were traveling in went down in Southern California. That incident, in part, led the U.S. Navy to order a “safety pause” at the time for all non-deployed aircraft.

Two days after the AFSOC announced the stand down, the U.S. Marine Corps said it had no plan to follow suit with its Osprey variant. Service officials said they had previously identified the issue and trained aircrews on how to respond to it.

Since 2010, at least 15 hard clutch incidents have been reported in the V-22 program, which encompasses the Marine Corps and Air Force variants, as well as the U.S. Navy’s CMV-22 variant, Breaking Defense reported. Of those incidents, 10 were reported in Marine Corps MV-22s.

READ MORE: Tower Controller Credited With Save of CV-22 at Kirtland AFB