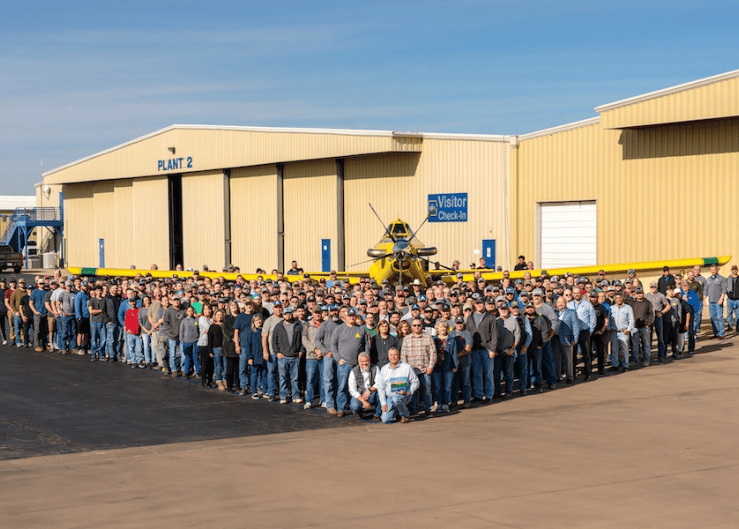 Air Tractor recently celebrated the delivery of its 1,000th AT-802A at the employee-owned plant in Olney, Texas. The 802 is the largest single-engine cropduster in production and its unique capabilities have given it the rare distinction of fundamentally changing the industries that use it. Even company founder Leland Snow, who died in 2011, didn’t comprehend the impact the big taildragger would have. “In the early 1990s when the very first 802s were built, our founder Leland Snow looked at the airplane and offhandedly remarked, ‘We’ll probably build 10 or 12 of these,’” current company President Jim Hirsch said. “Well, Leland would be really pleased about its worldwide distribution and success today.”

Snow designed the 802 as a firefighting aircraft, reasoning that smaller, more nimble aircraft would have a place in dealing with wildfires. Today hundreds of the air tankers are in operation, from water scooping amphibs to wheeled versions that can be quickly filled with retardant at unimproved airfields close to fires to make multiple drops each day. Their adoption has spawned a new acronym, SEAT, or single engine air tanker.

Of course, Air Tractor’s roots are in agricultural application, and large-scale farming operations quickly saw potential for the huge single. The 802 carries 800 gallons of spray and can cover hundreds of acres in one application. Indeed, Serial Number 1000 went to a huge farm in Argentina that grows 110,000 acres of soybeans, cotton and corn. The farm also has an Air Tractor 502XP. In addition to aerial application, 802s have been adapted for use in oil spill cleanup and fuel hauling in remote areas, to timber seeding and reforestation and coca crop eradication in South America. Air Tractor has also developed a military version of the aircraft and recently sold 75 of its Sky Warden close support aircraft to the U.S. Special Operations Command.