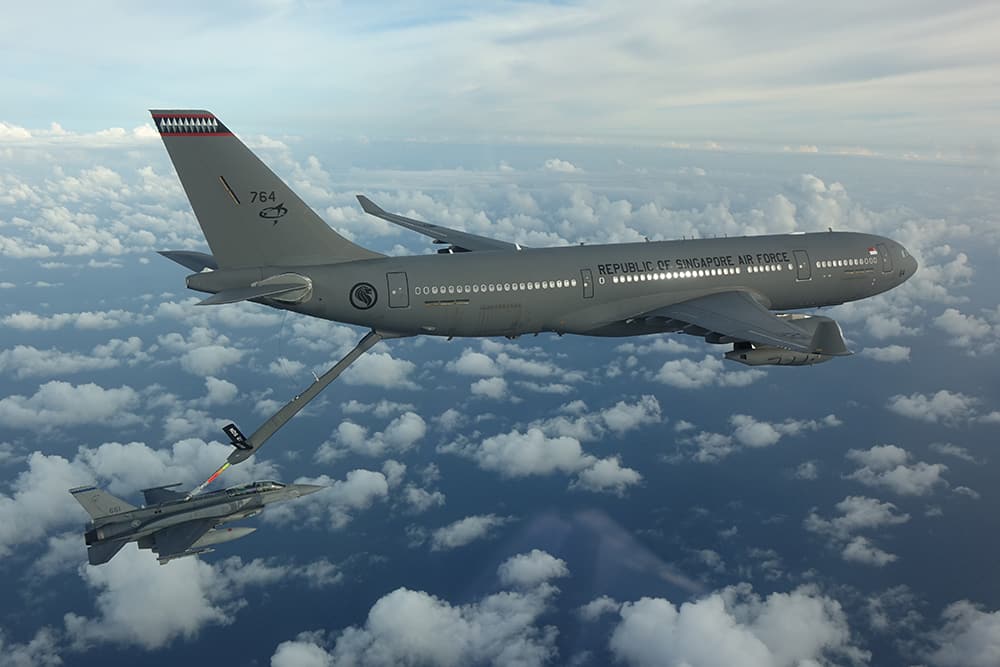 Airbus’ A330 MRTT (Multi Role Tanker Transport) has been certificated to conduct automatic air-to-air refueling (A3R) boom operations during daylight, making it the first tanker in the world with the designation, according to the aircraft manufacturer.

The A3R system is designed to reduce the workload of air refueling operators, while also optimizing air-to-air refueling transfers, all while requiring no additional equipment on the receiving aircraft.

Airbus first tested automated contact with a boom system in 2018, during a joint operation with the Royal Australian Air Force, according to Jean-Brice Dumont, head of military air systems at Airbus Defence and Space.

“Since then, we’ve achieved more aeronautical ‘world firsts’ thanks to the support of our customers, especially with the key participation of our partner the RSAF, a launch customer and the first operator to benefit from this game-changing capability,” Dumont said.

The A330 MRTT, which is based on the A330-200 widebody civilian airliner, is able to haul up to nearly 245,000 pounds of fuel, which according to Airbus, “is the highest capacity of all tanker aircraft, even those with additional fuel tanks in the cargo deck.” The aircraft can also offload about 55 tons of fuel during a four-hour loitering mission at a range of more than 1,000 nm from the departure point.

To date, Airbus has delivered at least 51 of 66 A330 MRTT aircraft ordered by customers including Australia, France, NATO, Saudi Arabia, Singapore, South Korea, United Arab Emirates, and the U.K.

Airbus is working to take air-to-air refueling automation even further. In late 2021, the company launched development work on technology that would make the A330 MRTT fully autonomous. Unlike the traditional air-to-air refueling operations, the autonomous capability—known as A4R—would not require any crew onboard to monitor fuel transfers.

Like the A3R capability, Airbus intends for the unmanned A4R version to not require retrofitting receiver aircraft in order to accommodate operations, he said.

Airbus is gearing up to test the concept soon. Through its subsidiary Airbus UpNext, the aircraft manufacturer has launched an “Auto’Mate” demonstrator to develop, adapt, and evaluate technologies that enable autonomous air-to-air refueling.

The company aims to flight test the technology in 2023. A final end-to-end demonstration using an A310 as a tanker refueling flight testbed and DT-25 target drones as receiver aircraft is planned the following year.

“The set of technologies developed in the Airbus Auto’Mate demonstrator will enable a disruptive step forward in the autonomy level of current air-to-air refueling (AAR) operations, to reduce crew fatigue and training costs, improve safety and efficiency, and pioneer unmanned air-to-air refueling operations (including unmanned-to-unmanned AAR operations), a highly demanded capability for future defense scenarios,” Airbus said in a statement.