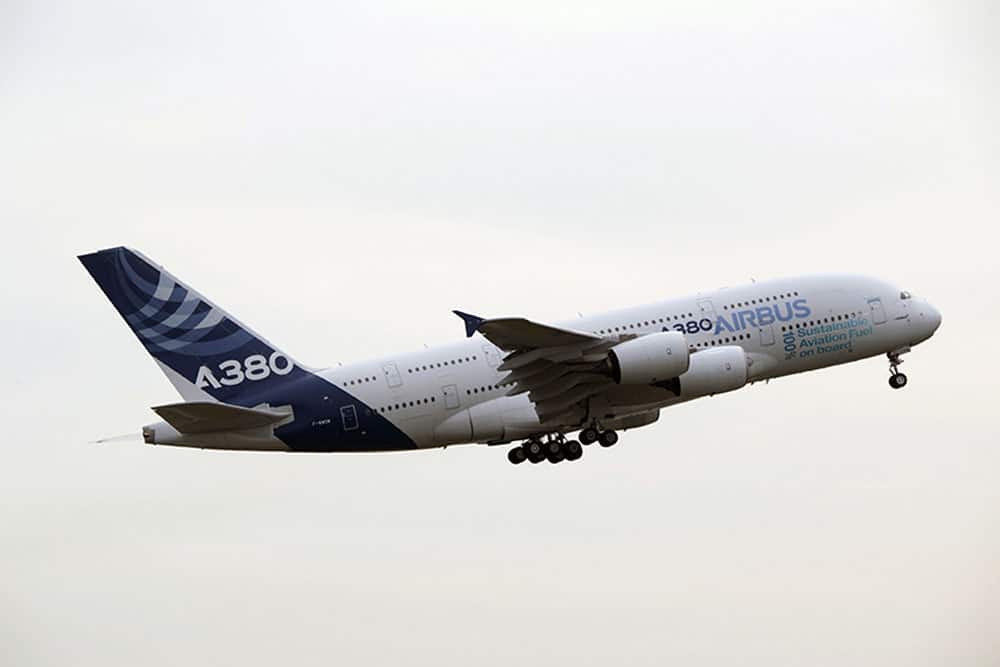 Airbus said it flew an A380 with one of its four engines running on 100 percent sustainable aviation fuel, or SAF, for the first time on March 25.

The flight followed a series of earlier SAF tests using the company’s A350 and A319neo aircraft.

The A380 flew for three hours from Blagnac Airport in Toulouse with one Rolls-Royce Trent 900 engine consuming 27 metric tons of unblended SAF produced by France’s Total Energies in Normandy. Airbus said it plans to make a second 100 percent SAF test flight, from Toulouse to Nice Airport on Tuesday. The second flight is meant to test SAF’s performance during takeoff and landing.

The company said the SAF produced in Normandy, close to Le Havre, France, “was made from hydroprocessed esters and fatty acids (HEFA), free of aromatics and sulfur, and primarily consisting of used cooking oil, as well as other waste fats.”

Airbus said increasing the use of SAF “remains a key pathway to achieving the industry’s ambition of net-zero carbon emissions by 2050.”

All Airbus aircraft are currently certified to fly with up to a 50 percent blend of SAF mixed with kerosene, the company said, adding that it is working toward certification for 100 percent SAF by the end of this decade.