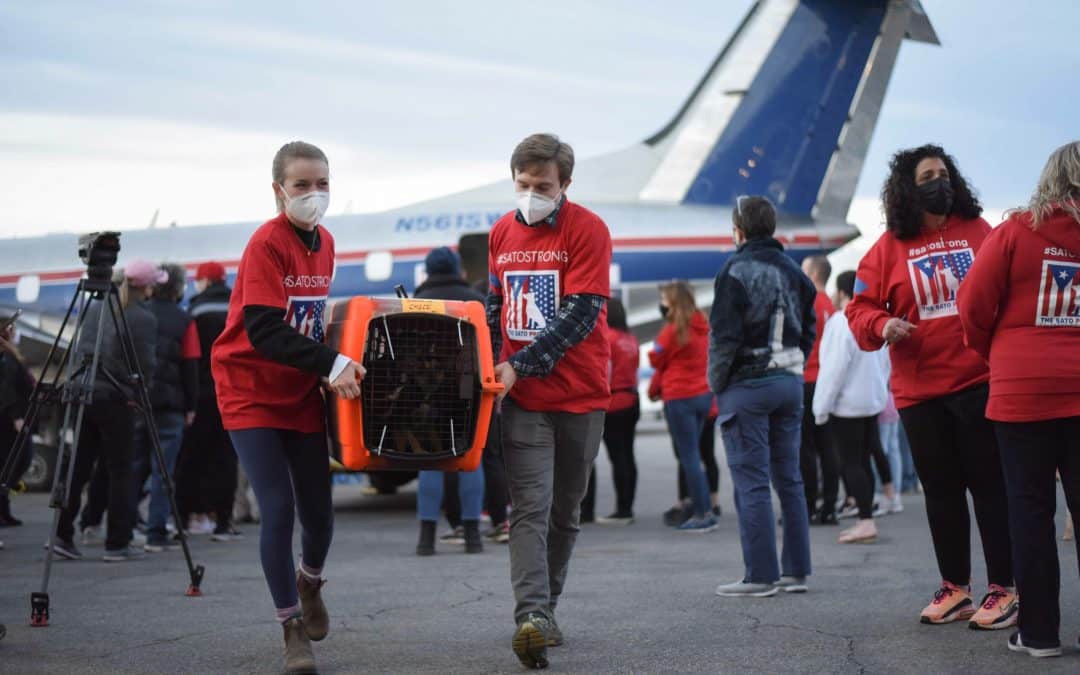 Hundreds of stray dogs and cats left abandoned in Puerto Rico will soon be winging their way from the Caribbean to New York state for adoption and an opportunity for a new life.

The event, called “Mission Possible 15,” is organized by Wings of Rescue and The Sato Project, and is set to liberate 165 dogs and 135 cats from overcrowded municipal animal shelters in Puerto Rico, which typically have a high rate of euthanasia.

During Saturday’s mission, the pets will be loaded onto two chartered Embraer Brasília 120 twin-engine turboprop aircrafts, each flown by a pilot and a copilot, according to Gene Gable, a spokesperson for Wings of Rescue. As a standard EMB 120, the lift will give the animals the ability be able to travel in a fully pressurized and temperature controlled manner, according to the San Diego, California-based nonprofit that conducts large-scale transport of animals in overcrowded shelters or shelters in disaster areas.

Also onboard each flight will be a Wings of Rescue representative and a guest passenger.

“They are configured for cargo from Berry Aviation in Texas,” Gable, told FLYING. “We also regularly fly a Pilatus PC-12, including to Puerto Rico, but as the number of pets on Saturday is so large, the Brasilias are a better choice.”

Plans for the mission have been in the works since the beginning of the year, and the schedule was set with an eye on potential weather events in the region.

“Since Hurricane Maria devastated Puerto Rico in 2017, it has become a standard part of our practice to fly as many animals as we can off the island before peak Atlantic hurricane season, which begins at the end of August,” said Tara Steinberg, spokesperson for The Sato Project, an organization focused on rescuing stray and abused pets in Puerto Rico.

The Sato Project has rescued more than 6,200 dogs and cats from the island, Steinberg said. “It has been rescuing dogs from the streets of Puerto Rico, vetting and rehabilitating them, and then flying them to New York for 11 years. For the first few years, our dogs flew on commercial flights.”

Once in New York, the pets are processed by an awaiting team, and their circumstances change for the better almost immediately. [Courtesy: Alexandra Lloyd / The Sato Project]

A partnership established with Wings of Rescue in 2016, however, elevated transport efforts dramatically, she said.

“This partnership has allowed us to fly even more dogs off the island at once and even lend support to other organizations and animals in need,” Steinberg said. “Since 2016, we have completed 42 missions of privately chartered airplanes packed with rescue animals from Puerto Rico.”

The logistics of herding 300 cats and dogs onto airplanes, even chartered ones, requires a lot of coordination. The unsedated dogs and cats are placed in approved, hard travel-safe pet crates, which are loaded into the cargo planes.

“Every animal has a certificate from a licensed veterinarian that certifies them healthy to fly, vaccinated, and free of any infectious diseases,” Steinberg said.

“We are told by pilots that the pets are typically very quiet during the flight, but tend to stir and be more vocal during takeoff and landing,” Steinberg said. Once in New York, they are processed by an awaiting team, and their circumstances change for the better almost immediately.

The animals are taken out of their crates, secured with a collar, harness, and leash, and transferred to their next step of the journey, which Steinberg described as “either to a foster family, shelter partner, or directly to their new family waiting in the parking lot!”

Want To Adopt or Fly a Rescue Pet?