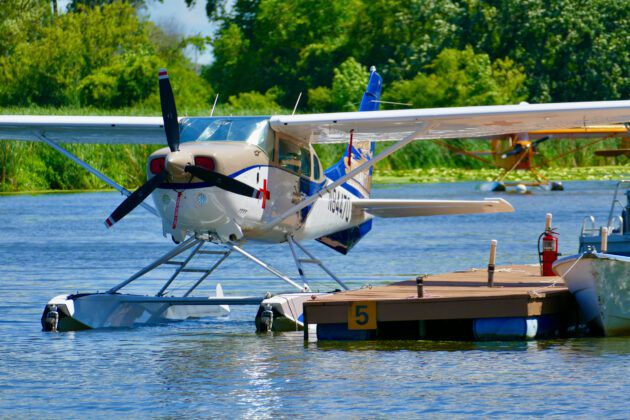 Along the Sepik River in Papua New Guinea (PNG), a 750-mile-long river that snakes its way through jungles and swamps, only one thing stands between remote villagers and the stark reality of life-and-death medical events. Samaritan Aviation’s Cessna 206 on floats provides, at no cost, the most daring and extreme of medical evacuation services.

Unique in the world of missionary flying, Samaritan Aviation meets the critical needs of more than 500,000 people across the East Sepik Province where virtually no medical facilities other than aid stations exist outside the provincial capital of Wewak. Here, the sick, injured, and wounded face days or weeks of travel by dugout canoes to reach the single hospital in the region.

Samaritan’s pilots reduce that critical travel time to a few hours. The result is that over the past 20 years, the missionary organization has saved thousands of lives with timely, critical transport by seaplane—the only mode of movement useful for meeting emergency needs. Without runways or landing sites, the muddy river offers its use as a runway for hundreds of villages along its banks.

Samaritan Aviation has a large exhibit presence at the 2022 EAA AirVenture Seaplane Base. The newest Samaritan 206 floatplane is docked in the seaplane lagoon and Samaritan staff is available to answer questions about this lifeline for impoverished communities in PNG.

The 501(c)(3) organization’s CEO and co-founder, Mark Palm, and the chairman of the board of directors, Dr. Dan Cranston, are on hand to explain the mission and reach that Samaritan is experiencing. Having introduced seaplane missions in 2010 in East Sepik, Samaritan Aviation has the ambitious goal of expanding services across the 13,000-foot Hagen Mountains to the Gulf Province of the country, which is one of the most underdeveloped and underserved regions in PNG. It has launched a $5.3 million capital drive to build infrastructure for a second base to serve an area that lacks roads or runways—just rivers and swamps. Having ready access to Samaritan’s floatplanes for medevac will be life-changing for the remote populations there.

Palm, 47, co-founded Samaritan Aviation in 1999 and developed the seaplane medevac operations himself, flying thousands of accident- and incident-free flight missions while living in PNG. Today, the organization has acquired its third 206 floatplane and has several missionary families living in PNG to foster its operations, including flight crew and medical staff.

Cranston, 56, is an emergency room physician from Greenville, South Carolina, who has helped direct the course of growth for Samaritan for nearly 20 years. Fundraising, planning and logistical support derive from his own experience in PNG as a teen with his missionary parents.

The Samaritan Aviation exhibit is open daily during AirVenture at the Seaplane Base. Buses depart to and from the idyllic Seaplane Base from the Bus Park at the main entrance gate at Wittman Field.