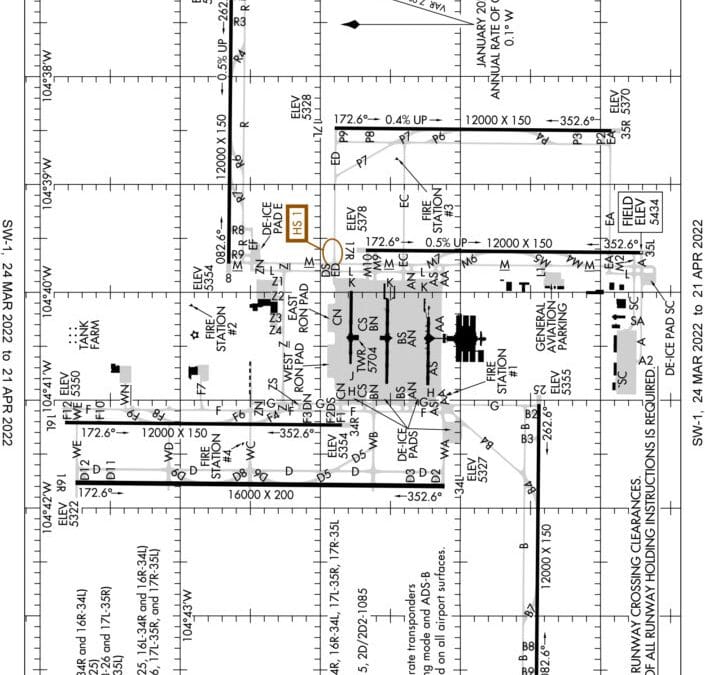 Whether they’re stretching out like welcoming arms to greet pilots on final approach, or pointing the way to an initial flight path, America’s longest runways serve as true unsung heroes of aviation.

Sometimes measuring more than three statute miles (sm) from end to end, these precisely constructed, carefully maintained, and under-appreciated ribbons of infrastructure are located at civilian and military airports across the United States, including New York, Colorado, and California. Outside the U.S., other extremely lengthy runways can also be found in far-flung places like South Africa, Brazil, and China.

Airport authorities build extremely long runways for multiple reasons, including to mitigate effects of high density altitude, and to accommodate extremely heavy long-haul passenger jets and cargo transports. Ideally, when designing runways, engineers will take into account prevailing directions for headwinds, tailwinds, and crosswinds, average temperatures, elevation, surrounding terrain, and the maximum takeoff weight (MTOW) of aircraft that are authorized to use the runway.

Typically, these runways cost tens of millions of dollars to plan, design, build, and maintain. Their function: providing consistent, reliable takeoff and landing surfaces in all kinds of weather for billions of pilots and passengers.

Below is a list of some of the longest civilian, military, and non-U.S. runways, along with a few facts that set them apart.

Southern California Logistics Airport’s the testing ground for the aviation industry. Check out a Boeing 787 Dreamliner during a water test. pic.twitter.com/rpunvCU1iY

Friday #FunFact: LAS has more than 8 miles of runways and 24 miles of taxiways. At more than 14,500 feet in length, Runway 8L-26R is the second-longest commercial runway in North America. pic.twitter.com/WKia8aqAp3

Thank you for passing through #JFK Airport.

Location: California
Longest runway: 05R/23L
Dimensions: 15,024 feet by 300 feet
Fun fact: The main concrete runway at Edwards is located next to Rogers Dry Lake. The 15,024-foot length of the runway with the 9,000 foot lakebed overrun “gives pilots with an inflight emergency one of the longest and safest runways in the world,” according to NASA.

Space Shuttle Discovery landing at the KSC after its 15 days in mission to the international space station at 2010. pic.twitter.com/ilDidfeKKY

Location: Kennedy Space Center, Florida
Elevation AMSL: 8.5 feet
Longest runway: 15/33
Dimensions: 15,001 feet by 300 feet
Fun fact: In addition to its 15,001-foot length, the runway has a 1,000-foot overrun on each end, according to NASA. It’s nearly as wide as the length of an NFL football field and its concrete surface is 16 inches thick. For drainage, the runway has a 24-inch slope from the centerline to the edges.

Two A-10 Thunderbolt II fighter aircraft from the 59th and 422nd Test and Evaluation Squadrons at Hill Air Force Base, Utah, participating in exercise Rescue Edge, could be seen arriving at Vandenberg Space Force Base on Aug. 24, 2021. pic.twitter.com/wmOC4422yI

DID YOU KNOW? To completely clear an inch of snow off just the main runway, they have to move 495,000 pounds of snow. pic.twitter.com/j2TmEQOJ77

How Are Runways Designed?

Planes manufactured by Aviastar-SP (the Tu-204, Il-76, An-124) have to travel over 7 miles of roads/taxiways from the factory to reach Ulyanovsk Vostochny Airport. pic.twitter.com/u89wbYV7le

Fun fact: Built in the 1980s as an alternative landing site for the Soviet space shuttle and to support test flights out of the nearby Aviastar aircraft factory.

#ThrowbackThursday #ThisDayInHistory #aviation #travel #airports #airlines
Did you know? Runway 17/35 is one of the longest runways in the world at 4900 metres. pic.twitter.com/Wzm9wKOzul

More than half of all funds for the FAA’s Airport Improvement Program are required to construct or rehabilitate U.S. runways, taxiways, and aprons, according to the agency. Construction standards for runway surfaces are intended to ensure pavements are built to last, with as little maintenance as possible.

Here are a few interesting facts surrounding the construction and operation of runways.

As you might expect, the primary materials for airport runway construction are concrete and asphalt.

The cost of constructing a runway with a width of 20 to 30 meters (65.6 to 98.4 feet) is estimated somewhere between $4,400 and $7,200 per meter of length, according to the International Energy Agency. The cost of building taxiways is significantly less, the IEA says, because of lower performance requirements.

The Cost of Lighting

According to the IEA, a 2002 study estimated that runway lighting systems consumed significant energy at U.S. airports. If you consider one gigawatt hour is enough energy to power about 750,000 homes, here is a list of estimated energy consumption by types of runway lights:

The United States boasts more airports than any other country in the world: 5,000-plus public facilities and more than 14,500 that are privately owned. Keeping them safe and operational is a key pillar of the entire aviation industry, no matter how long or short they are. Because, for pilots, the most important runway in the world is the one they’re about to use.