An Airport Powered by Chickens 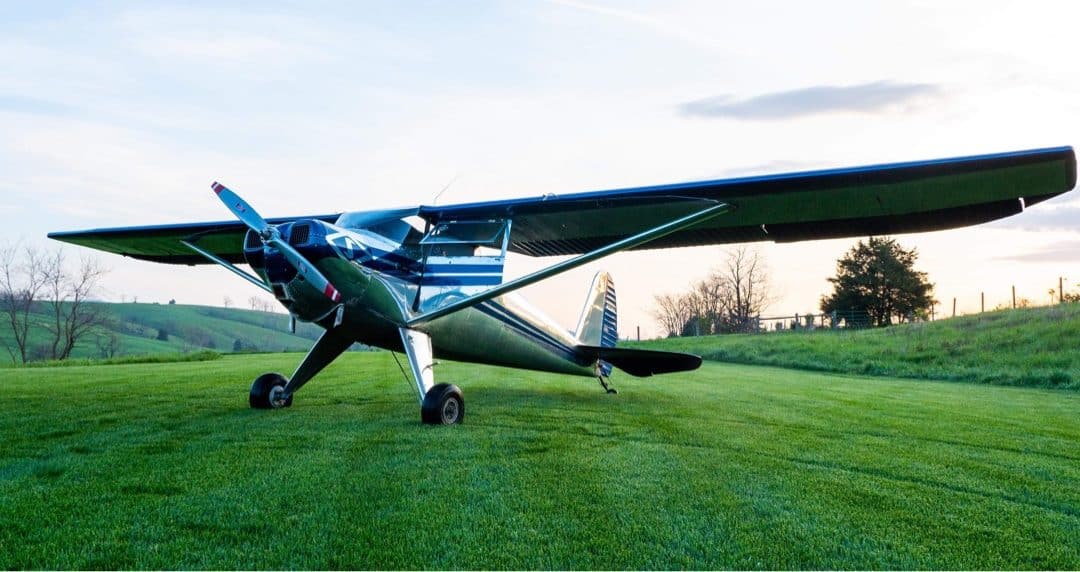 Weavers Landing Airport in Bridgewater, Virginia, is memorable for two reasons. The first being the four long, almost mysterious, buildings that sit adjacent to the 1,470-foot-by-70-foot turf runway. The second is the runway itself, which conjures up descriptions like, “golf course smooth,” “plush,” and “carpet-like” to those who fly in or see it in pictures.

Andrew Weaver, VA63’s namesake and caretaker, advised what has enabled the grass landing site to make many other airstrip owners green with envy.

“As far as fertilizer, our poultry litter is pretty hot when it comes to nitrogen and phosphorus,” he said. “We have it tested every couple of years because we sell it to farmers in the area and like to have a litter test to show nutrient makeup for what we got. I use that and soil testing to get the application right and have actually been using very small amounts of poultry litter. That’s why you see the grass so lush and green the way it is.”

So why does Weaver talk about his fertilizer composition? Those large, mysterious structures on the property are chicken barns. In addition to the 1946 Silvaire Luscombe 8A that Weaver flies, another 160,000 or so other birds call the property home. The square footage within the four buildings is dedicated to Weaver’s robust poultry farming operation, which paved the way for his ability to create an airstrip.

“My wife and I both grew up in agriculture. Her parents were dairy farmers and my parents were poultry farmers,” Weaver said.. “After we got married and I got done with school, we started looking for a place to build a farm of our own. That search lasted probably six months until we found a spot that fit our liking. And of course, along with that, I was looking for a place where I could do what I wanted agriculturally—but also put together an airstrip at some point.”

As Weaver began building out his acreage, a section of the land stuck out to him. It would be the perfect place to fly from, he thought.

“In 2014, we built two chicken houses,” he said. “So along with that we had to take out quite a bit of topsoil to get down to grade where we could have pads sturdy enough to build those structures. We took out thousands of yards of topsoil and put it in a big pile. Then we pulled clay from another part of the property and spread out the topsoil nice and smooth [over that area],” he recalled.

The first signs of an airstrip appeared after that work was completed.

Weaver continued, “Fast forward to 2019: We had the opportunity to build two more chicken houses. In order to build the access road for those two structures, we came down, farther down along our fence line and pulled clay off of there to build the access road. We ended up with the last part of the airstrip, and all of this we kind of designed into our engineering plans.

“Because of our chicken house projects, we ended up with a runway for basically free—minus the cost of grading and spreading the topsoil back over the top of it. That’s how the runway came to be.”

One of Andrew Weaver’s multiple efforts of growing grass at his airstrip that sits upon his poultry farm’s land in Virginia. [Photo: Andrew Weaver]

His first attempt at seeding the airstrip, however, was a learning experience.

“I tried to plant grass in 2014 on my little 750-foot section. I didn’t do a whole lot of research and went to the turf management store here locally. I told them what I wanted to do and they said, ‘Here, use this. This will work,’” Weaver explained.

“I didn’t know a whole lot about it, so I got the dirt ready and spread my bluegrass seed. The afternoon that I did that, we had a thunderstorm that I think dumped two or three inches, and totally wiped all of my seed away.”

Mother Nature won the first battle, but Weaver was determined and gave it another go.

“A couple of weeks later I did the same thing and literally the next day the same thing happened,” he said. “So, I kind of gave up and let weeds grow but kept it mowed down nice because a friend of mine with a Just SuperStol liked to use it from time to time.”

Once his time was freed up after completing the property’s last chicken houses, Weaver decided to try his hand once again at turf management.

“I started doing a little more research because it really bugged me how my first attempts at growing grass turned out. So, I got on YouTube and found a couple of guys, some with lawn care businesses and others who are weekend warrior types with really nice lawns. They talked about different types of grass, different fertilizers, watering systems, and all kinds of stuff. I got neck deep into that and decided that bluegrass probably wasn’t for me because it doesn’t tolerate heat very well,” Weaver explained.

With the help from his school-aged children, his wife, and a friend with heavy equipment, the soil was conditioned, and all the rocks were picked out of it. Now, the scene was set for Weaver’s third attempt at seeding the airstrip surface.

“I think I used 22 bags of tall fescue seed and spread it all by hand with a little push spreader. Basically, I sectioned it all off with one of those three-hundred-foot tape measures and set a bag for each section. It took me three days to spread it all. We really lucked out…picked a week where it didn’t rain hardly at all.”

Weaver would then go on to explain the careful process of layering the surface with peanut hulls, which served as mulch, in addition to purposely watering and fertilizing the airstrip over the next few months.

Even with the trials initially overcome, Weaver says that the joys of owning and operating his own airstrip has been well worth the efforts. Not only that, completing the runway was the culmination of a longtime wish inspired by a family member.

“My [maternal] grandfather, Bob Shenk, is kind of a Luscombe aficionado here and actually has an airstrip just up the valley from me, against the mountain. And honestly, he’s the reason that I wanted to do this at some point. As a little kid he was an inspiration for me wanting to learn to fly and from a very young age wanting to own an airstrip.”

The post An Airport Powered by Chickens appeared first on FLYING Magazine.