An Introduction to Aircraft Inspections 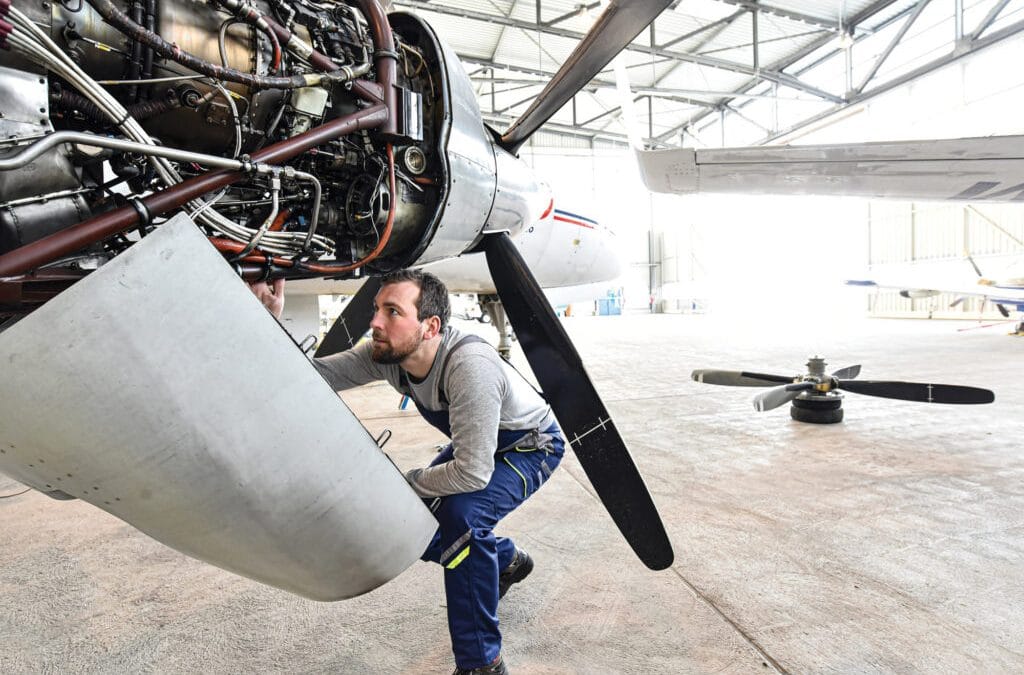 Manufacturers build aircraft to transport people and cargo to destinations all over the globe. These machines evolved from simple structures to intergalactic-modern wonders, and the innovation continues today.

When one steps aboard an airplane, they are demonstrating an act of faith in the machine, the crew, and those charged with maintaining the entire operation. Yes, flying is primarily yaw, pitch, and roll, but behind-the-scenes support makes it possible.

Pilots rely on navigation charts to plot their course, and aircraft inspectors rely on checklists to conduct checks. These are the charts of aircraft maintenance.

Richie Norton, a best-selling author and businessman once said that destiny is not fate, it’s navigation. That quote could not ring more true in aircraft inspections. Do you wish to entrust your flight to chance or the careful navigation and planning of trained aerospace maintenance professionals?

Part of that highly specialized training is the documented maintenance inspection instruction. Guidelines, procedures, and recommendations were reviewed, edited, and evolved through thousands of hours of maintenance evolutions, with each generation passing down the knowledge to the next.

The selection of an inspection program to follow is dependent on many factors. One is how you operate your aircraft as there are different rules for pleasure, others for fly-for-hire, and even parameters for experimental homebuilts. One thing is constant across the board, thoroughly inspect each component, structure, and rivet as if your life depended on it.

Each time we get together, I try to leave you with a little something different you can take with you. One core theme is the importance of doing business with someone you can trust. A few weeks ago, I touted the benefits of working with an established aircraft parts dealer. Picking your aircraft maintenance provider is equally important.

When I was in airframe and powerplant (A&P) school, one of my instructors, the late Jack Radford, would tell a story of his days performing aircraft inspections. Now, for those of you who knew Jack and the crop-dusting cowboys around Americus, Georgia, you are aware of their ability to craft a tall tale or two. His feats with the torque wrench are the stuff of legends. All you had to do was ask him.

One day Jack was on duty at the hangar when a local owner taxied up in a high-wing taildragger. Exiting the aircraft, he inquired about the cost of an annual. Jack, ever vigilant, walked to the starboard wing and, grasping it firmly, pushed it skyward. A loud snap ensued as the wooden spar cracked violently, and Jack spun around and, holding up five fingers, loudly announced $5,000.00!

Although he and I knew each other only a little while, I still heard that story dozens of times. Is it true? Highly probable that some of it might be true. Like the part where Jack is at the hangar.

The impression Jack was trying to make on us young mechanics is three-fold.

As a maintenance professional, be upfront and honest about the worst-case scenario. He did not believe in bait-and-switch tactics to get work in the door. That short-sighted thinking only produces headaches for all parties involved.

Aircraft are expensive, and maintaining them is not something you need to cut corners on. As is often the case, it will GUE, which is A&P vernacular for getting ugly early.

And the most valuable takeaway from this is:

If something goes south, you want to find it on the ground during an inspection, not at altitude over a densely populated area.

Aircraft inspections have two main categories, unscheduled and scheduled. As we continue our journey together, we will unpack each one and discuss the many layers of aircraft inspections. For now, we can maintain our 30,000-foot look and hit the high points.

Unscheduled inspections occur whenever something goes wrong either in the sky, on the ramp, or in the hangar. Some examples include but are not limited to:

Scheduled inspections range in scope from the simple, like checking tire pressure, to the extreme, an airliner disassembly D-Check. The FAA is always a great place to start, and their library of publications is required reading for aviators, operators, and maintainers. One such resource is advisory circular AC 20-106, “Aircraft Inspection for the General Aviation Aircraft Owner.”

Some examples of scheduled inspections are the:

Later on, we will cover phase inspections and letter checks.

It’s important to note that the checklist can either be procured from the aircraft manufacturer or created by an individual or entity. The American Bonanza Society publishes an excellent resource for 100-hour and annual inspections.

Customizing an inspection checklist is critical because of the multitude of factors that affect the diversity of aircraft operations. Each aircraft has a different size, weight, mission, and operating environment. One checklist does not fit all.

Each region of the country must consider its environment when drafting inspection procedures.

The larger the aircraft, the more funds need to be set aside for both annual and preventive maintenance. [File Photo: Kim Rosenlof]

Kirk Ramsey is the owner of Palmetto Aviation Repair in St. Simons Island, Georgia. He and I recently caught up on aircraft inspections. Operating on the lower coastal plain of the state, Kirk has to pay special attention to certain aspects of his airplanes because of the environment.

FLYING: What are the key things you look for when conducting an inspection?

KR: Currently, we have an older Beechcraft Baron in for its annual. Given the age of the aircraft, we are concerned about chafing control cables, structural cracks, excessive wear, and tear. Another point to consider is the operating environment. Given our warm wet ocean climate, corrosion is a huge concern.

FLYING: How is document review related to the inspection process?

KR: Paperwork is a big part of maintaining an aircraft. I have seen operators run into issues due to paperwork, even when their airplane is in tip-top shape. I mentioned the Baron we have in the hangar. Twenty-five percent of the 40 hours of labor we expend on the job will be going through the logbooks, component tags, and technical publications. We need to have a good idea about the state of the aircraft logbooks before we lay a wrench on them.

FLYING: Have you encountered scenarios where the owner did not want to correct all the squawks you found? If so, how do you reconcile the sign-off and return to service?

KR: The short answer is yes, although it can be tricky to work through these instances when they occur. Occasionally, we will find improper maintenance, [or] unapproved repairs or parts. We bring it to the owner’s attention, and they have the choice of having us correct it or not. When this does happen, we typically negotiate a reasonable solution. Although under no circumstances will we return an aircraft to service in an unairworthy condition.

Rest assured, we will revisit this topic in the future. Your homework is as follows. If you own an airplane, when is your next scheduled inspection due? Do you have a maintenance professional to perform the work and return it to service? If an incident occurs on your next flight, whom would you call?

I encourage you to get involved with a maintenance provider and establish a relationship. Walk the hangar with them. Ask for a copy of the checklist they use and familiarize yourself with the terminology and processes.

Inspections take time and, when done correctly, will be a good barometer of aircraft health. No one likes unplanned expenses; however, they rank much higher than emergency landings.

The post An Introduction to Aircraft Inspections appeared first on FLYING Magazine.