An Old Airplane Gets a Familiar New Owner 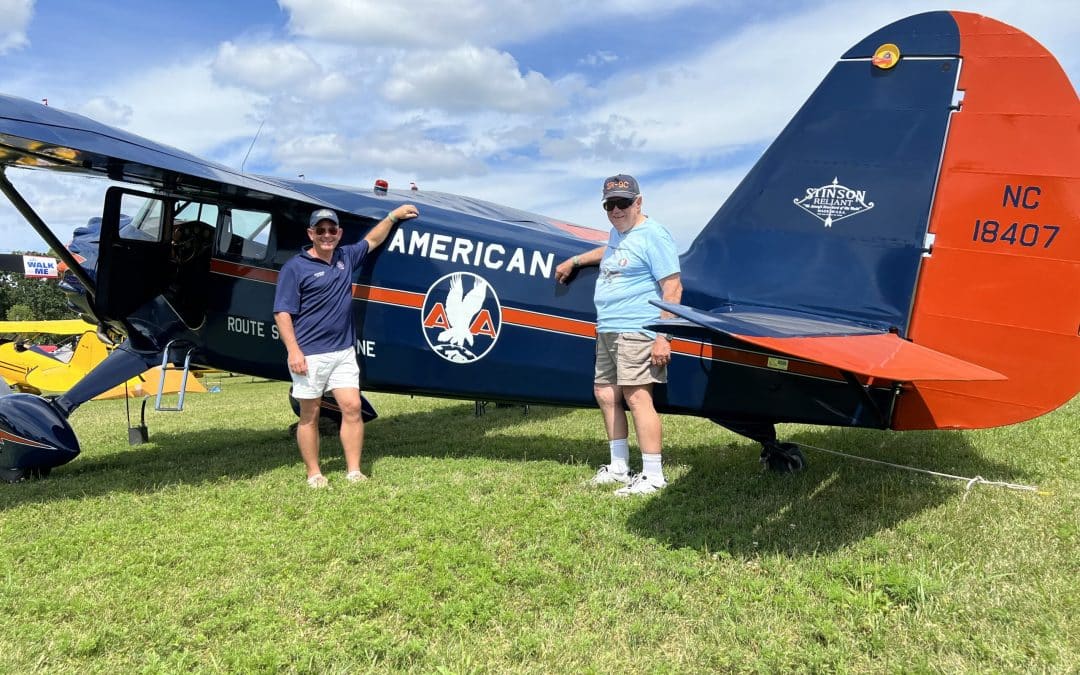 One of the best parts of attending EAA AirVenture in Oshkosh, Wisconsin, is catching up with people whom you have known over the years—for me, one of those people is Dean Del Bene from Chicago, Illinois. When I met Del Bene many years ago, he was the owner and pilot of a 1937 Stinson SR-9C painted in the vintage colors of American Airlines. The words “ROUTE TRAINER” were emblazoned on the side as this aircraft was used to train pilots.

According to Del Bene, the aircraft was used for instrument training and route qualification as simulators, as we know them today, were decades away from development. Airline pilots were required to get “route qualified,” which meant knowing every airport within 50 miles of their route.

Del Bene purchased the airplane in 1973 and with the help of friends, he restored it—and then spent the next 40 years caring for the aircraft. Vintage aircraft take a lot of care, he said, as you are always polishing them and wiping oil off their bellies—so it is a good idea to get help.

The aircraft is painted in the 1930’s colors of American Airlines because it was used as a route trainer during the early days of aviation. [Photo: Meg Godlewski]

For Del Bene, that help came in the form of then 12-year-old Mark Riedel from Roanoke, Texas.

“He worked with me in the hangar on Saturdays,” says Del Bene, noting that it was Riedel’s father, Charles, who first got Del Bene interested in flying. “I’d pick up Mark and bring him to the hangar to work. He’d polish the airplane and sweep the hangar, and when we had a pigeon problem, I gave him a pellet gun with a rifle scope and sent him on pigeon detail.”

Riedel and Del Bene both recall how Riedel would often take a break from his polishing,  look at Del Bene, and announce seriously, “I’m going to own this airplane someday.”

“And I’d reply, ‘shut up kid, and get back to polishing,’” Del Bene laughs.

Approximately three years ago, Riedel purchased the aircraft from Del Bene. Both men note that there is no such thing as aircraft ownership.

The cockpit is predominantly wood — even the control wheels. On the lower right corner of the panel is what looks like a glove box — it is actually a false panel to hide the modern avionics (notably the ADSB) which is required in the airspace where the aircraft now lives in Texas. [Photo: Meg Godlewski]

“We are the caretakers of these aircraft,” Riedel explains. “And he warned me about how much work owning a vintage aircraft can be.”

Ironically, today, Riedel is an airline pilot—for American Airlines. He is quick to tell people that the paint scheme on his vintage aircraft goes back to 1983, well before he became a professional pilot.

The aircraft has been meticulously restored and has several awards to show for it. The details of these awards are engraved on a panel displayed on the left side of the cockpit.

Del Bene and his best buddy Jim Leonard traveled all over the U.S. in the aircraft—sadly, Leonard flew west a few years ago. Del Bene says the airplane wouldn’t have been an award winner without Leonard’s help.

Riedel, who captains an Airbus for American Airlines, says it took a few years for Del Bene to warm up to the idea of him taking ownership of the airplane. When Riedel would bring it up, Del Bene would say he wasn’t ready to talk about it.

“Then one day, a man in California called Dean about wanting to buy the airplane and Dean called me and said, ‘We need to have that talk now,’” Riedel says.

On the edge of the doorframe on the left side of the cockpit are engravings detailing the restoration history of the aircraft. [Photo: Meg Godlewski]

Having modern avionics in a cockpit that is all polished wood and leather and chrome would be a mortal sin, Del Bene says.

Riedel also upgraded the aircraft engine to 300 hp and added new brakes and seat belt buckles, among other things.

The airplane does not fly like an Airbus, says Riedel with a laugh, and Del Bene nods sagely explaining, “It can be like a mean horse—always looking back to see if you are paying attention.”

Del Bene says he’s pleased that the Stinson now belongs to Riedel, saying it’s obvious that he cares for the aircraft

The post An Old Airplane Gets a Familiar New Owner appeared first on FLYING Magazine.