Artemis I, the Rocket That Could 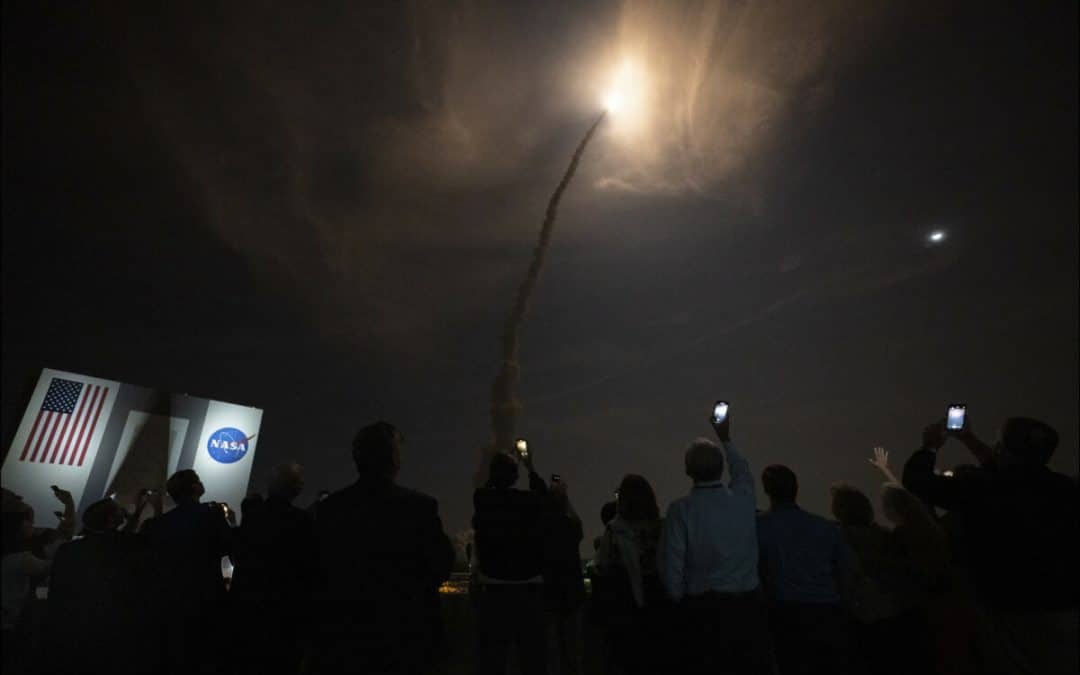 KENNEDY SPACE CENTER, FLORIDA —It was a nervous night at Kennedy Space Center. Thousands from across the country, and across the world, had their hopes set on Artemis I.

As the clock ticked from T-6 hours, journalists and members of the public swarmed the Florida coast to see NASA’s most powerful rocket yet—the Space Launch System (SLS).

Through the eye of my camera, I could see the freezing cold liquid oxygen venting from the rocket. Fueling it had proven troublesome in previous attempts. Every update from Launch Control silenced the journalists huddled in the bullpen, myself included.

NASA astronaut Stanley Love shared his connection to the Artemis program with FLYING.

“I’ve been working on Artemis since 2004, with some brief breaks, including one to go fly in space,” Love said. “So basically, this is my 18-year-old baby that we’re getting ready to send off to college.”

There are so many things that must go right for a rocket launch, and one small problem can determine a go or no-go on nights such as this one. Around the press site, conversations between onlookers echoed the same phrase.

Unfortunately, no launch day is complete without its fair share of suspense.

The night grew more worrisome with each update—about three hours before launch, a liquid hydrogen leak was detected on a valve towards the bottom of the mobile launcher. Artemis Mission Control then deployed three members of Red Crew, an emergency repair team trained for moments like this.

What was supposed to be a simple 15-minute repair turned into an hour-long ordeal. During the fix, Artemis Mission Control received word that a radar sight lost connection with the rocket, putting the entire launch in jeopardy. Luckily, team members identified a faulty ethernet switch as the cause of the connection loss, and the device was replaced within an hour.

By that time, Red Crew left the launch complex, having completed their task to secure the liquid hydrogen leak, saving the launch.

“All I can say is that we were very excited,” said Trent Annis, one of the three deployed members of Red Crew. “We showed up today.”

On Wednesday, November 16, at 1:41 a.m. EST, Artemis I took off and began its journey to the moon with a fanfare of applause and sonic booms. The plume of fire spouting from underneath the rocket lit up the night sky like the sun.

My first launch, definitely won’t be the last #GoArtemis pic.twitter.com/3SMxJjwmHw

Any other launch may not garner the same attention as Artemis, and that’s for a good reason. For the first time in a generation, NASA is sending a human-rated spacecraft to the moon and back as a practice run for humanity’s crewed exploration of the solar system.

The Artemis missions are poised to attain a grand achievement of diversity—sending the first woman and person of color to step foot on the moon, resuming humanity’s presence on the celestial body for the first time since Apollo 17 in 1972.

In a previous interview with FLYING, NASA astronaut Capt. Victor Glover shared his thoughts on potentially becoming the first person of color to set foot on the lunar surface.

“I actually try hard not to think about that. Don’t get me wrong, it’s a dream of mine to walk on and work on the surface of the moon,” Glover said. “Right now, what I’m focused on is my job, which is working on the hardware, to develop the Human Landing System, to support events like this, and then, to make sure that I’m healthy and technically ready in case my boss does want to assign me to one of those missions. But, if that day does come—man, it would be truly amazing.”

The post Artemis I, the Rocket That Could appeared first on FLYING Magazine.