Ask FLYING: What Kind of Precip Will Fall First? 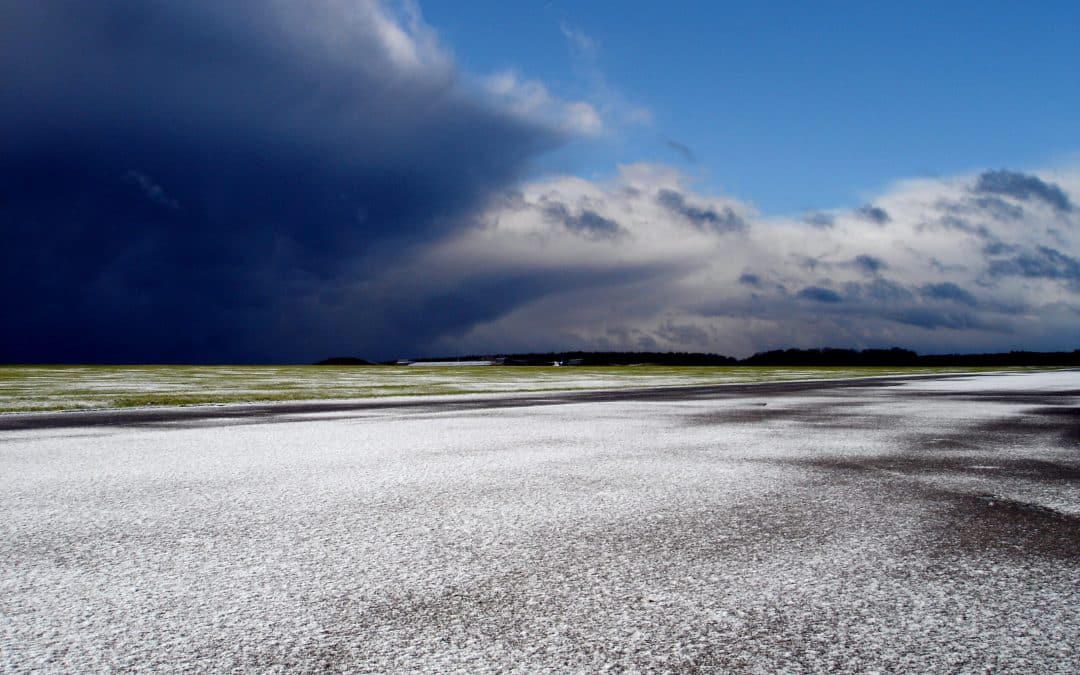 Q: Is it possible to identify the typical sequence during which snow will fall in the Midwest versus an area prone to receiving lake effect snow? It seems snow pellets or sleet/ice pellets appear before flakes in some circumstances.

A: Outside of large hailstones, the precipitation type that gets reported at the surface depends entirely on the vertical temperature profile. A winter weather system that lays down a few inches of snow, and one that produces ice pellets or rain may hinge on a degree or two of difference in the temperature aloft. This kind of uncertainty is what drives meteorologists crazy during the cold season. While the weather can unfold in countless ways, there are a few common themes to consider.

For snow to reach the surface, a couple of things need to occur. First, the temperature close to the surface and aloft needs to be sufficiently cold. Even so, the entire temperature profile below the base of the snow-producing cloud doesn’t have to be below 0 degrees Celsius but cannot be too warm or snowflakes will melt as they fall into the above-freezing air near the surface. Nevertheless, it is possible to get wet snow on grassy surfaces with a surface temperature as warm as + 4 degrees C. But at that temperature, it usually melts on contact if it survives at all.

Snow covers fields in the Midwest. [Courtesy of Scott Dennstaedt]

Second, the cloud top temperature must be sufficiently cold to enhance ice crystal growth at the expense of supercooled liquid water. If the temperature at the cloud top is warmer than -12 degrees C, often the cloud below is dominated by liquid water. In this situation, liquid precipitation in the form of rain or drizzle will be the predominant precipitation type at the surface even though the entire temperature profile may be below 0 degrees C. If the surface temperature is below freezing for this warm-topped, all-liquid scenario, then you get freezing rain or more likely freezing drizzle falling from the cloud. In some cases, this may result in what is known as “snizzle,” a mixture of very light snow and freezing drizzle.

Colloquially known as sleet in the U.S., ice pellets fall to the surface with a temperature profile like that of snow except for one key difference. Courtesy of a low-level inversion, a layer of the lower atmosphere aloft is slightly warmer than 0 degrees C. Meteorologists call this the warm nose since it looks like a nose on a vertical temperature profile such as a Skew-T log (p) diagram. If the maximum temperature in the warm nose is too warm or the depth of the warm nose is too thick, the snowflake falling through this above-freezing layer completely melts into a raindrop. That drop subsequently falls into a subfreezing layer near the surface to become freezing rain. However, if the above-freezing air in the warm nose is sufficiently shallow, the snowflake only partially melts, and the drop retains an icy core. As that slushy raindrop subsequently falls into the subfreezing air below, it freezes into a hard little nugget called an ice pellet. Without retaining that icy core, the drop will not freeze while airborne until it makes contact with an object on the surface, hence, freezing rain is the result. Therefore, just a degree or two aloft can make a difference in whether the precipitation type is snow, ice pellets, or (freezing) rain.

Classic ice pellet signature on a Skew-T log (p) diagram depicting deep saturated conditions with sufficient cold air aloft to enhance ice crystal growth. Snow falls into a shallow melting layer about 3,000 feet agl that turns the snowflake into a drop with an icy core. This falls into subfreezing temperatures below the warm nose that freeze the slushy drop into a frozen nugget.  [Courtesy of Scott Dennstaedt]

The movement of air masses through the area is what drives the temperature profile aloft in the Midwest. Again, there are countless ways for this to happen, but a common scenario is when an area of low pressure with an attendant warm front moves out of the southern or central Great Plains into the Midwest. On the northern side of the warm front, the temperature profile aloft is entirely below freezing, but south of the warm front there is warm air being pumped in from the Gulf of Mexico. Given sufficient cold air north of the front, the precipitation falls to the surface as snow. However, as the warm front pushes north, warm air from the south overruns that cold, dense air locked in at the surface. This sets the stage for warm air sitting over cold air and creates a temperature inversion aloft. This begins to shape the warm nose profile previously mentioned.

As the warm air mass moves to the north, an observer on the ground at a fixed location will likely see the precipitation type start out as snow and then transition briefly to ice pellets and then, finally, change to rain or even freezing rain. Ice pellets mark the short-lived transition between snow and rain or freezing rain as that shallow warm nose deepens aloft. Then, as the area of low pressure continues its track northeast into the lower Great Lakes, the cold front passes through the Midwest and the precipitation type may then change from rain back to snow as cold air pours in behind the cold front.

It is the track of the area of low pressure as well as the movement and properties of the attendant air mass that define the transition of precipitation observed at the surface. If this low tracks further to the east, you may experience snow that briefly changes to ice pellets that change back to snow. Or if there isn’t much moisture on the cold side of the warm front, the precipitation may briefly begin as ice pellets and then change over to snow.

Cloud streets develop as cold air from the northwest pours over the warm waters of Lake Ontario. [Courtesy of Scott Dennstaedt]

In contrast, lake-effect snow typically occurs within the air mass itself. One common scenario is when a low pressure center moves out of Canada and tracks through the upper Great Lakes. This is often referred to as an Alberta clipper. As the low pressure and attendant frontal system passes, the surface winds will shift around to the northwest over the upper Midwest. That chilly northwest wind crosses the warmer water of Lake Michigan, for instance, and the low-level instability over the water creates an environment that squeezes out much of that moisture into snow downwind of the lake.

Unlike the weather system that taps into the Gulf moisture mentioned earlier, these clipper systems carry with them very little moisture, since their origin is a dry continental source from Canada. Consequently, the area of low pressure and frontal systems produce very little precipitation. However, upon their passing, a cold air mass dominates the area to include much of the upper Midwest and Ohio Valley. Within this air mass, the warm waters of the Great Lakes create an environment conducive for moderate to heavy snow. In this case, there is sufficient cold air aloft with warm, subfreezing air near the surface. Unlike the track of the area of low pressure that originated from the central or southern plains, there isn’t a change of air mass and, therefore, there’s no temperature inversion that will develop to create a transition of precipitation type at the surface.

The post Ask FLYING: What Kind of Precip Will Fall First? appeared first on FLYING Magazine.