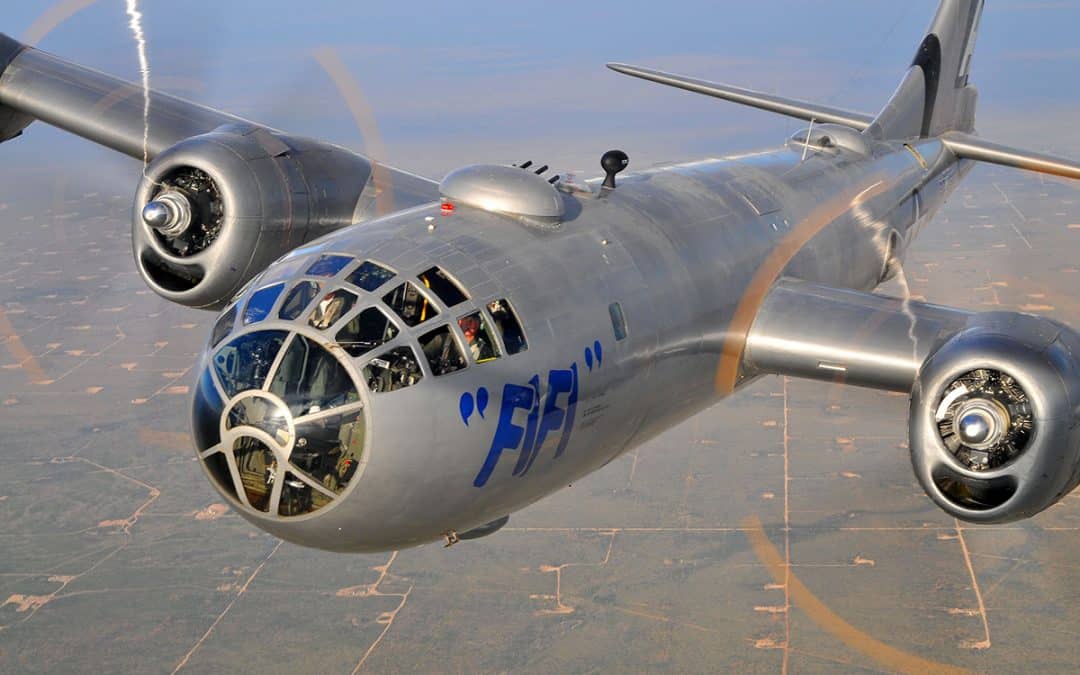 Boeing’s B-29 Superfortress was the most sophisticated propeller-driven bomber of World War II. Advanced armament, propulsion, and avionics systems were all critical to the bomber’s success in the war in the Pacific.

Capt. Robert Rodenhouse, a B-29 pilot, recalled, “It just blew my mind. First of all its size, and then its capabilities. And to think that they could take an airplane, a bomber, and pressurize it so that we could feel the same at sea level as we did at 30,000 feet. And when I knew the range it was capable of, and the bomb load, I couldn’t wait to get behind the wheel.”

When the United States Army Air Corps (USAAC) originally ordered B-29s, it planned to use them to bomb Nazi-held Europe. However, the B-29 served only in the Pacific; there, they delivered conventional bombs, incendiary bombs, mines and two nuclear weapons.

In the mid-1930s, the USAAC sought a heavy bomber capable of flying 5,000 miles. The Boeing B-17 was the result; it had strength, firepower, speed, bomb load and altitude capability. However, it could not fully meet the design request—particularly in range.

The range was needed because military strategists thought that the United States would be forced to fight Nazi Germany from American soil if Germany invaded England.

READ MORE: A Once-in-a-Lifetime Flight Aboard a B-29

Four aircraft manufacturers—Boeing, Consolidated-Vultee, Douglas, and Lockheed—were asked to develop a prototype. Boeing had begun designing such an airplane in 1938, and immediately began revising its design to meet the new specifications.

Only Boeing and Consolidated-Vultee developed flying prototypes; the USAAC decided on the Boeing design. A contract for two flyable prototypes was issued in September 1940, followed in April 1941 by another contract for 250 aircraft plus spare parts equivalent to 25 bombers (the contract was later amended to 500 B-29s).

The heaviest production aircraftThe first to have pressurized crew compartmentsCentralized/computerized fire controlBomb load capacity of 20,000 poundsCapable of flying 5,830 miles, with a top airspeed of 365 mph (317 knots)

The earliest B-29s were built before testing was finished; therefore, the Army established “modification centers,” where last-minute changes could be made without slowing aircraft assembly lines.

Boeing innovated the long, narrow, high-aspect ratio wing equipped with large Fowler-style flaps, according to the Pacific War Online Encyclopedia. The wing design allowed the B-29 to cruise at high speeds and at high altitudes, but also to maintain good handling characteristics during slower takeoffs and landings.

More revolutionary were the aircraft’s pressurized sections—the flight deck forward of the wing, the gunners’ compartment aft of the wing, and the tail gunner’s station. For the crew, flying above 18,000 feet msl was more comfortable because pressure and temperature were regulated.

Except for its rear guns, all could be controlled remotely from any of the gunner stations, which were located away from turrets to isolate the gunners from noise and vibration. The B-29B was fitted with the AN/APG-15B airborne radar gun sighting system, mounted in the tail to help provide defense against night attacks.

For maximum streamlining, B-29s had two bomb bays to maintain a narrow fuselage. Six generators produced 54 kilowatts to power the B-29’s systems. Each airplane had an Eagle radar system to aid navigation and bombing accuracy.

The first XB-29 prototype flew on September 21, 1942, from Boeing Field (now KBFI) in Seattle, followed by a second prototype by year’s end, and then 14 YB-29 service test models. (The second B-29 prototype crashed after two engines caught fire; the test crew and 20 people on the ground were killed.)

This illustration shows the interior of the B-29. [Image: PBS]

The first B-29s off the production line had numerous design flaws because 500 were ordered before the end of flight tests.

Capt. Rodenhouse commented on the B-29’s problems. “We had trouble getting the bomb bay doors and landing gear to retract. The biggest problem was engine overheating. And that was so critical, because if an engine coughed or sputtered on a takeoff, you’d never make it; never get off the ground. And the plane was so overloaded that it would never be able to stop with its normal braking.”

Gen. Curtis LeMay led bomber groups in Europe; then in July 1944, was transferred to the China-Burma-India theater to command the 20th Bomber Command, the first to deploy B-29s. According to history.net, LeMay said that the B-29 “was the buggiest damn airplane that ever came down the pike.”

After arriving at 20th Bomber Command, five B-29s crashed in two days; engine failure in the hot desert conditions was blamed. Engine fires during takeoff were the most dangerous flaw (due to magnesium alloy engine components used to save weight). Also, the airplanes’ fire extinguishing systems were woefully inadequate, failing to fully extinguish fires 87 percent of the time.

By May 1944, 130 B-29s were operational. The first B-29 combat mission went after targets in Bangkok, Thailand, the longest raid of the war to date. Of the 100 B-29s, only 80 reached the target; the others returned to base due to mechanical issues. Bombing results were mediocre.

The first bombing mission against the Japanese home islands since Doolittle’s Raid in April 1942 occurred on June 15, 1944. This was also the first mission launched from Chinese bases. The B-29s attacked iron and steel factories on Kyushu. Again, results were poor—only 47 of 68 aircraft reached their targets.

Additionally, photo reconnaissance showed bombing accuracy (within 1,000 feet of the target) was only 12 percent during daylight precision raids in January 1945. By June, accuracy improved to 40 percent.

However, for all of its flaws, the B-29 terrified the Japanese.

The United States captured Saipan, Tinian, and Guam in the Mariana Islands in August 1944. Captured Japanese air bases were several hundred miles closer to Japan. The bases were repaired and improved. The 21st Bomber Command was established on those islands and began bombing Japan on November 24, 1944.

The massive B-29s generated significant logistical burdens, however. Each flew about eight missions monthly; each mission consumed 6,400 gallons of gasoline and expended 8 tons of bombs per airplane. By June 1945, more than 100 cargo ships were needed to meet these logistical requirements.

A Change of Tactics

The high-altitude, precision bombing tactics of the 20th and 21st Bomber Commands had yielded poor results. High altitude winds over Japan were so strong that the B-29’s bombing computers could not compensate. Capt. Rodenhouse recalled, “If we were going with the jet stream, our bombs were over the target. If we were going against it, the bombs would fall short. After several missions a meteorologist went along; he determined the problem was a jet stream.” Additionally, the weather over Japan was generally so bad that visual target acquisition was rarely possible at high altitudes.

Capt. Rodenhouse was shocked, and his reaction was echoed by many. “We thought they could throw the kitchen sink up there and hit us. Can you imagine flying a big four-engine bomber at 5,000 feet? Why, that was just unheard of! My crew said, ‘I think those generals lost their marbles.’”

Paradoxically, the B-29 was designed as a high-altitude weapons platform. But its greatest successes came at low altitudes. The new plan allowed each B-29 to carry more bombs. Night missions meant that remaining Japanese fighters were avoided. Therefore, most gunners were left behind, which meant more bombs—including incendiaries.

Incendiaries contained gelatinized gasoline (napalm). When an incendiary bomb hit, napalm started fires that spread quickly and were almost impossible to extinguish. Ensuing fires became infernos. For example, on March 10, 1945, 300 B-29s dropped nearly 250,000 incendiaries on Tokyo. As many as 100,000 Japanese died, almost 16 square miles of the city were destroyed, and a million people were left homeless.

In similar raids, much of Japan’s remaining industrial and economic infrastructure was devastated.

At the Boeing Wichita assembly plant, an aerial view of completed B-29s parked on an apron. [Photo: airplanes-online.com]

Late in 1944, USAAF leaders chose the Martin plant to produce a squadron of B-29s codenamed SILVERPLATE. These B-29s were modified significantly; except in the tail, all gun turrets were removed, armor plate was jettisoned, electric propellers were installed, and bomb bays were modified to hold the highly secret atomic bomb.

Despite the devastating bombing raids and ongoing defeats of the Japanese army and navy, Japan continued to fight. Those planning the invasion of Japan calculated that the U.S. would suffer as many as 1 million casualties.

Harry S. Truman had been president only since April 12, 1945, following the death of President Franklin D. Roosevelt. Truman made the difficult decision to drop an atomic bomb on Japan to end the war. On August 6, 1945, Col. Paul W. Tibbets, Jr., in command of the Superfortress Enola Gay, dropped an atomic bomb on Hiroshima, Japan.

Three days later (after no word from the Japanese), Maj. Charles W. Sweeney piloted the B-29 Bockscar, dropping the second atomic bomb on Nagasaki. Finally, on August 14, 1945, the Japanese accepted Allied terms for unconditional surrender.

Following the war, B-29s were adapted for other functions, including in-flight refueling, anti-submarine patrol, weather reconnaissance, and search and rescue duty.

The Korean War began on June 25, 1950; B-29s returned to strategic daylight-bombing missions. The few strategic targets and industries in North Korea were quickly destroyed. B-29s flew more than 20,000 sorties, dropped almost 200,000 tons of bombs and downed 27 enemy airplanes. The bombers were effective throughout the war; however, they were vulnerable to attacks by MiG-15 jet fighters.

The B-29 could carry more payload and fly faster and at higher altitudes than other Allied bombers.[Photo: aviation-history.com]

The last B-29 in squadron use was retired from service in September 1960. By then, the U.S. Air Force was primarily jet-propelled.

Despite its shortcomings, the B-29 could carry more payload and fly faster and at higher altitudes than other Allied bombers. The aircraft were a huge and expensive gamble—the program cost $3 billion ($50.5 billion today)—more than the $2 billion spent on the Manhattan Project, which developed the nuclear bomb.

Questions then and since were raised regarding the B-29’s cost-effectiveness. Each cost over $500,000 to build—five times the cost of a Lancaster, a British heavy bomber. Each airplane required 13 tons of aluminum, half a ton of copper, 600,000 rivets, 9.5 miles of wiring, and 2 miles of tubing. To keep a B-29 flying required 74 relief and ground crew members.

B-29s were judged a failure in their original roles as conventional high-altitude daylight strategic bombers. They were much more successful as low-altitude night bombers. However, the use of B-29s as the world’s first nuclear bombers likely muted more intense criticism of the program.

The post B-29 Superfortress Pulled the Trigger on World War II in the Pacific appeared first on FLYING Magazine.