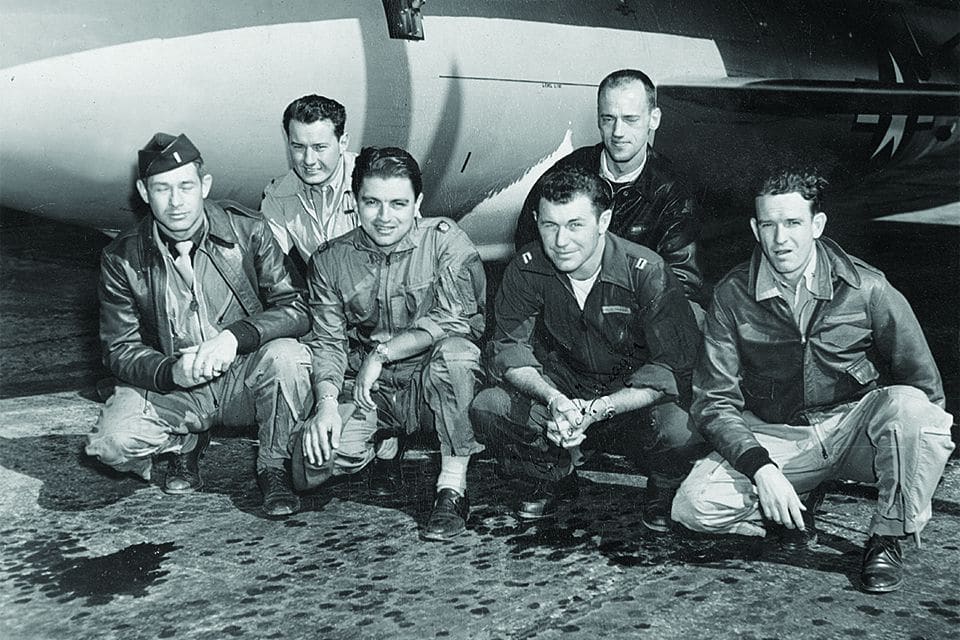 My various research projects lead me on some interesting trips through photo archives and one that turns up repeatedly is also one of my favorites. It was probably shot in 1947 or 1948 and captured the flight operations team for the Bell X-1, the first aircraft to exceed Mach 1.

You’ll immediately recognize Chuck Yeager in the front row, but unless you’re an X-1 groupie like me, the others won’t be familiar, perhaps especially the third from the left. That’s Bob Cardenas, who died this week in California at the venerable age of 102. He was the last living member of the X-1 flight team. (Yeager died in 2020, at 97.)

Look closely and you’ll see a major’s oak leaves on Cardenas’ shoulders for in addition to being the command pilot of the B-29 that dropped the X-1, Cardenas was senior and also the project officer charged by Wright-Patterson’s Col. Albert Boyd with getting the X-1 to its Mach 1 goal as quickly as possible. Project engineer Jack Ridley—that’s him on the far right—mapped out nine flights to get there. It took 13, with some stumbles along the way.

Like probably everyone in that photo, Cardenas’ career took a winding road to the left seat of that B-29, with a no small share of happenstance, good fortune and coincidence. Improbably, he flew combat missions in a B-24 named Glamorous Glennis five years before he ever laid eyes on Yeager.

Cardenas joined the Army before the U.S. entered World War II and because he had learned to fly in gliders, his initial assignment was to set up a glider school that eventually morphed into the training operation that prepared pilots for the Normandy invasion and other airborne operations in Europe. Unlike Yeager and Hoover—that’s Hoover in the back row, second from left—Cardenas had been at Wright-Patterson before his combat flying tour and had flight test experience, mostly in bombers.

That came in handy after he was shot down on his 20th mission over Friedrichshafen, Germany, in March of 1944. He escaped capture via an icy swim in Lake Constance before being plucked out of the water by a Swiss fisherman. Interned in neutral Switzerland, he was soon put to work test flying some 40 to 50 B-17s and B-24s that had landed in neutral Switzerland either damaged or low on fuel. The Swiss had so many of them that they were nervous about a bombing visit from the Luftwaffe and wanted to disperse them to mountain airports.

Later in 1944, Cardenas escaped through the French underground and eventually returned to Wright-Patterson and flight test work, some of it of captured German aircraft, including the Me 262 and Arado 234. Early in 1947, the arcs of those six men in the photo came together at an aircraft factory in Buffalo. They slung the X-1—the first pure research aircraft of its kind—and flew west to a wind-blown dry lake called Muroc.

Despite its crazy dangerous edge-of-technology bent, the X-1 progressed nearly as rapidly at Col. Boyd had wished it to. It had minor setbacks, but the unsung Major Cardenas kept it on track. In this series of interviews (Part 1, Part 2, Part 3) done with Cardenas by the San Diego Air and Space Museum in 2017, he describes some of the details from a perspective different from the well-trod recollections of Yaeger. Speaking of which, the interviewer seems to explore whether Cardenas knew Yeager had broken ribs after falling off a horse the night before the record flight. I say “seems” because Cardenas suggests he didn’t want to replace Yeager with Hoover because of animosity between the two pilots. The details of that may never be known, but if Cardenas did know, he assumed no small risk in ignoring it.

Cardenas did his own share of hairy flight testing, including the Northrop YB-49 which, on one stall test, tumbled about its lateral axis despite Northrop’s insisting that this was impossible. Cardenas warned fellow flight test pilot Glen Edwards about this tendency, but the forewarning was insufficient. Edwards and pilot Daniel Forbes were killed when the YB-49 again tumbled, breaking up over Muroc, a base that would later be renamed after Edwards himself. Sadly, another man in the picture—Lt. Edward Swindell, far left—also died in that crash. Ironically, Cardenas thought so highly of Edwards that he had recommended him for the X-1 project. Col. Boyd overruled him and Yeager got the job instead. And standing behind Yaeger is the sixth man on the team, Bell Aircraft’s Dick Frost. He briefed Yaeger on the X-1 and oversaw his initial flights.

President Harry Truman came to inspect the YB-49 at Andrews Air Force Base in February 1949, after which he had Cardenas fly it down Pennsylvania Avenue and over the Capitol in a demonstration that the pilot described as “kind of hairy.” (Photo credit Jim Busha)

Even if he hadn’t sought it, Yeager basked in the public limelight. Cardenas was the diametric opposite. He once told an interviewer he didn’t give a damn if his name was noted in the newspaper. That proved unavoidable in 1949, however. At the behest of President Harry Truman, Cardenas flew the YB-49 nonstop from California to Washington, D.C., in just over four hours, a new record. Truman clambered into the cockpit and told Cardenas he was going to buy some of YB-49s for a new bomber fleet. Cardenas winced, because, as he later said, the airplane “wouldn’t bomb worth a goddamn” because of its inherent roll instability.

Nonetheless, insisted Truman, he wanted to show off what he was about to buy, so he ordered Cardenas to fly it at roof top level down Pennsylvania Avenue. Dodging trees and wires, Cardenas complied, pulling up at the last second to miss the capitol dome. A well-timed photo caught what would foretell a future made possible only by the advent of fly by wire: a practical flying wing bomber.

Later in his career, Cardenas continued in flight test, flew combat and training missions in the F-105 in Vietnam and, upon being promoted to brigadier general, was given command of the Air Force Special Operations Force. As a personal project after retirement, he was instrumental in establishing the Miramar National Cemetery.

In a life filled with curiosities, ironies and unpredictable twists, Robert Leon Cardenas died on his 102nd birthday, March 10, 2022. Although little heralded, as he would have wished, his legacy is more than a century’s worth of consequence.