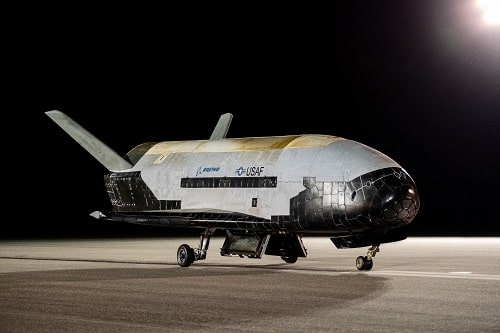 The X-37B Orbital Test Vehicle, a reusable space plane built by Boeing (NYSE: BA), landed at NASA’s Kennedy Space Center on November 12 after setting an endurance record of 908 days in orbit. The previous record was 780 days in orbit.

The occasion also marked the completion of the vehicle’s sixth mission. The X-37B carries experiments into space and returns them to earth for analysis for government and industrial partners. It has now flown more than 1.3 billion statute miles and spent 3,774 days in space.

For the latest mission, the vehicle’s sixth, it carried a service module that was used to increase its payload capacity. The module separated from the orbiter before its re-entry to ensure “a safe and successful landing,” Boeing said.

“This mission highlights the Space Force’s focus on collaboration in space exploration and expanding low-cost access to space for our partners, within and outside of the Department of the Air Force (DAF),” said Gen. Chance Saltzman, chief of Space Operations.

The mission began with the launch of a United Launch Alliance Atlas V rocket that carried the orbiter from Cape Canaveral Space Force Station in May 2020, Boeing said. The vehicle carried experiments, including a solar energy project designed by the Naval Research Lab, and a satellite designed and built by cadets at the U.S. Air Force Academy in partnership with the Air Force Research Laboratory, Boeing said, noting that the satellite, called FalconSat-8, deployed in October 2021 and remains in orbit today.

“Since the X-37B’s first launch in 2010, it has shattered records and provided our nation with an unrivaled capability to rapidly test and integrate new space technologies,” said Jim Chilton, senior vice president, Boeing Space and Launch. “With the service module added, this was the most we’ve ever carried to orbit on the X-37B and we’re proud to have been able to prove out this new and flexible capability for the government and its industry partners.”

The X-37B program is a partnership between the U.S Department of the Air Force Rapid Capabilities Office and the U.S. Space Force. Boeing designed and manufactured the spacecraft, and provides program management, engineering, test and mission support from sites in California, Florida, and Virginia.

In 2020, the X-37B received the Robert J. Collier Trophy for advancing the performance, efficiency, and safety of air and space vehicles, Boeing said.