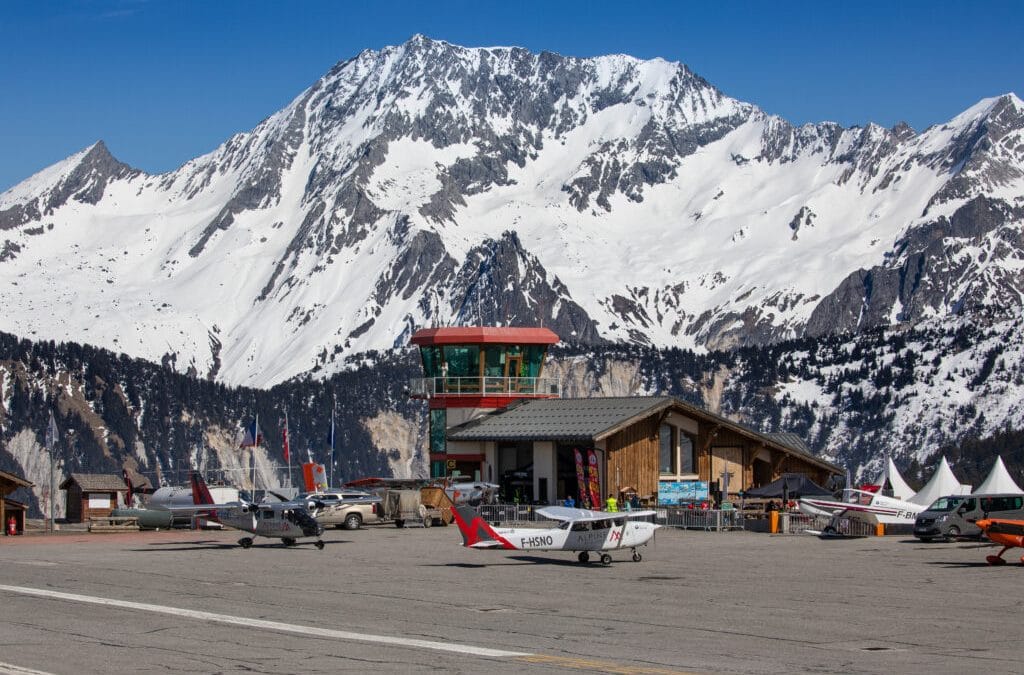 “The child who lives at the foot of the mountains considers with astonishment mixed with terror the gigantic world where there are entwined glittering glaciers and dark rocks, this world which is infinite, the all powerful.”

Courchevel (LFLJ) is well known as a challenging airport worldwide, with stunning views, and a staggering appearance to the neophyte and expert pilot alike. When we pinned back the curtains on this place, we confirmed that caution, dedicated training, and careful planning are key to enjoying this runway cradled in the Alps.

The Courchevel Altiport is one of nine high-elevation airports in the French Alps with the “altiport” designation. The network of altiports, which are improved and generally paved, complements a series of “altisurfaces” that include grass strips in the summer months, and glaciers or snow-packed terrain suitable for landing with ski-equipped aircraft in the winter.

Altiport elevations range from 4,500 to 8,000 feet, making them similar in high-density-altitude operations as airports in the Rocky Mountains and Sierra Nevada in the U.S. Courchevel hosts quite a bit of traffic, especially in the winter months, as pilots and the cognoscenti use it to access the resort destinations of Courchevel and the greater Trois Vallées area.

The mountain rating is a separate qualification under EASA, and altiport-specific within France. [Photo: Timo Breidenstein]

They say money can’t buy you happiness. But it can buy you time seeking a mountain rating in the French Alps, which is pretty much the same thing.

France is within the European Union, and therefore governed by EASA’s Flight Crew Licensing (FCL) regulations. Whether you hold an EASA pilot certificate or one issued by the FAA, you must hold an EASA-issued mountain rating, along with additional training, to land at altiports like Courchevel.

This is because the French aviation authority (DGAC) takes regular mountain qualification a step further, requiring site specific training for its designated altiports. There is a lot of sound reasoning behind this. Each altiport has unique features, not only in terms of location, but in runway pitch and condition, local weather, and wildlife or other hazards. Like the backcountry airstrips in the western U.S., going in with a skilled instructor to each strip before tackling it on your own is not just a good idea, it’s almost guaranteed to save your life.

The mountain rating course offered in Alpine Airline’s SAN Jodel D140 Mousquetaire is a proficiency-based course with a minimum of 20 hours flying included, normally accomplished over two or three weeks. However, you must demonstrate capability in mountain flying techniques and altiport operations in order to complete the course and take the flight test with the examiner. The course’s package price, 6,000 euros (about $6,900), covers those 20 hours plus ground lessons, preflight briefings, and the instructor’s time; additional flight hours clock in at €285, including instructor. The French D140 is a wood-andfabric airplane with conventional gear, with a 180 hp Lycoming O-360 engine. It weighs 600 kg (1,320 lbs) empty with a maximum takeoff weight of 1,200 kg (2,640 lbs), and its tough gear is well suited to bumpy mountain airstrips.

Alpine Airlines offers the “wheels” course from May to the end of October. “The best periods are in May to June, then September to October,” says Victor Pauly, former airworthiness manager and instructor for Alpine Airlines. “The weather and the sunlight in summer…are better, but it is all the contrary for the air. In summer, air is hot, so the engine [performance] is less… and the air is very dynamic. The thermal convection could be very strong, so we can’t fly from the end of the morning up to the end of the afternoon.” An additional “skis” rating, offered in the winter months, allows you to land on the glacial altiports using a ski-equipped airplane.

Pauly notes that the most challenging aspect of the course for experienced pilots is the need to fly down within the mountains and close to the terrain. Hugging one side of a valley allows you to preserve your ability to turn around when below ridge lines—but getting that close to terra firma rising up beside you takes a strong will. His favorite part of the course? “[To] see the progression of the student…and to teach him what the mountain is.”

Unless you have a French mountain rating, you must make one landing at the altiport every six months to stay current. Otherwise, you must renew with an instructor. The mountain rating course lets you land at any of the designated altiports once you have that altiport’s site qualification. Though the rating was once not recognized outside of France as an EASA-approved mountain rating course, the French DGAC has converted the rating to one fully approved under the FCL regulations. This went into effect on April 8, 2018, along with the requirement to possess the rating. At that time, it was understood that if you held the French rating, EASA would convert that qualification into the full mountain rating.

The nearby altiport at Méribel also offers close-in training for those flying light aircraft, but it is “neither fish nor fowl,” as pilot Len Shephard relates. He regularly flies his TBM 850 into Courchevel from Guernsey since obtaining his mountain rating in 2000—but he won’t take the TBM into Méribel. It’s not as long as the runway at Courchevel, and the runway is not pitched as steeply to make up for the lack of length. Ultra lights and aircraft up to the Cessna 172 class can use it though, landing in the midst of the family ski area at Méribel in winter, or in summer near the golf course.

Alpine Airlines flies commuter trips to locales like Nice and Geneva out of Courchevel, and scenic flights for those who want a taste of the area, and the challenges of flying in it. The altiport charges a landing fee during the high season, while parking and hangaring fees apply year-round. Fuel is available.

If you ski, or if you don’t, there is plenty to do in Les Trois Vallées. The area has welcomed outdoor enthusiasts and dilettantes alike since its earliest days. The ski resort at Méribel, in the Tarentaise Valley, first opened in 1938, with Courchevel opening across the ridge to the east in 1946. In Courchevel, the tiers of the village are referenced by altitude: the top tier, where the airport sits, is Courchevel 1850, for 1,850 meters above sea level, or 6,070 feet msl.

The architects of the resorts envisioned that they would interconnect from the beginning—the first ski pass for Les Trois Vallées sold in 1958. So, if you ski or snowboard, a secondary bucket list item is to bag all three valleys—arguably the largest skiable area on one lift ticket in the world—in a single day. Ski passes typically run less per day than many resorts stateside: During the 2021-2022 season, a day pass at Méribel runs €56 (about $65) and the Trois Vallées pass was €66 ($76). Ski equipment rental costs between €40 to €50 per day, depending on your preferences and the local shop—some even deliver direct to your chalet.

Europeans tend to have a more relaxed approach to a day on the mountain, pausing often for treats: There are a wide variety of places to stop for a grande latte, giant hot chocolate, or a dose of vin chaud (hot wine), plus food offerings ranging from sandwiches on up.

Not into winter sports? Try your hand at parasailing; several operators hawk the experience, literally from the mountaintops. Tempting, especially for pilots. Courchevel is also littered with high-end shopping, from couture to fine wine, and jewelry to sporting goods. Look for VIPs while you stroll through town; the resort is known as a playground for the rich and famous, though it’s pretty easy to stay low-key.

Around the villages you will see evidence of the area’s history as the site of several Olympic Winter Games, notably Grenoble 1968 and Albertville 1992. The ski jumps and ice skating rinks were located in the Trois Vallées and are still open to the public. Along with a large recreation center with swimming pools, there are plenty of alternative activities, especially for families.

Culinary treats abound in the area, with Courchevel possessing enough Michelin-starred restaurants to appeal to the most discriminating gourmet. The best local dishes feature the regional Savoie cheeses, definite crowd-pleasers. A must-do is fondue: It was practically born here. Among the places highly recommended by locals in Méribel is the famous La Fromagerie (literally, The Dairy, though you can think of it as The Cheese Place). A dinner of raclette and fondue with beverages and dessert costs about $50/person.

The altiport at Courchevel welcomes pilots throughout the year, from its perch adjacent to the ski slopes. [Photo: Timo Breidenstein]

You know you want to: Take a peek at the procedures used by those who know how to make the most of this runway carved out of a ski slope. Use your head, though: You must obtain instruction and the rating prior to landing at LFLJ (or any designated altiports).

LFLJ is a VFR-only spot, but like many airports similar in challenge and complexity, the French authority publishes a visual landing chart outlining the standard VFR approach procedure. Weather information can be obtained by calling the tower by phone in advance, or by picking up the latest on the airport’s AFIS frequency, 120.080, when the tower is open and you’re in range.

For many years, the tower was closed during summer months (winter being the busier season), but now it’s often open through July and August. If the tower is closed, you will need to overfly the runway to check conditions and for obstructions, then make a modified traffic pattern over the adjacent valley.

The chart depiction shows the first reporting point over the town of Moutiers, which lies deep in a steep valley to the north-northeast of the field. But if you are transitioning from an IFR flight plan, or coming in from outside the area, you will likely begin an intermediate segment of sorts at Geneva, or certainly by the time you are over the Lac d’ Annecy or Chambery-Aix-les-Bains airport (LFLB). LFLB is the nearest regular airport reporting weather and your likely source of QNH or altimeter setting until you can raise the tower at Courchevel. However, because of the topography, the value can be different by 4 or 5 feet mb between Chambery and Courchevel so this should be used with caution.

IFR transitions take you down to FL100 (10,000 feet msl), to help you get below any layers (much lower would not be wise because of the surrounding terrain). You will need to come down to 7,000 feet following the Doron valley to reach the next checkpoint over the town of Bozel. As you descend, pay close attention to the feel of the air; the microweather generated by the mountains can produce significant up- and downdrafts. Keep your speed up until passing Le Dont du Villard, the peak that marks the turn from an extended base leg onto final. You want to be right on 1.3 times Vso, plus perhaps a little extra to account for the slope, depending on the airplane.

When you touch down near the approach end of Runway 22, your altimeter will read roughly 6,371 feet. As you slow down quickly, the slope changes from 12.9 percent to 18.56 percent. You may need a little extra power to carry you to the top of the runway and onto the ramp. If the runway is snow-packed, beware of snow banks lining the cleared landing area on the runway. Illusions also spring from the contrast between the dull runway surface, when clear, and when it’s turned color-blinding white by the snow under the alpine sun. Flat light under cloud cover deceives you.

When you take off again, you’ll use that nearly 19 percent pitch to gain rotation speed within a few hundred feet—with any luck. Then you’re off, like you’ve launched from a carrier pitching on a mountainside.