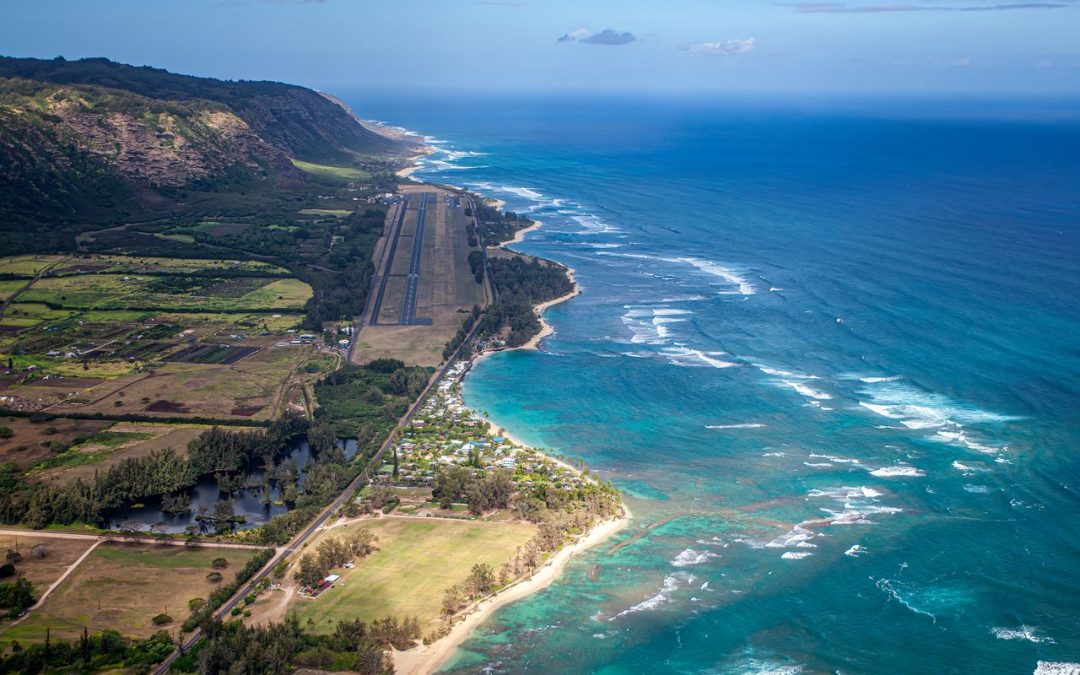 We’re accustomed to old mountains, as many of the world’s people make their homes on those that formed millions—or billions—of years ago. But the mountains that make up the Hawaiian Island chain are more recently formed, layered up from the ocean floor and built by the lava flowing down. Erosion from the rain and the wind has carved the pleats we fly past, particularly on the windward sides of the islands. Looking across their heights passing under the wings of a Cessna 210, we peer into what the ancient Earth must have looked like by witnessing these evergreen dark mountains in their youth. The islands grow younger as we fly south and east along the chain from Kalaeloa/John Rodgers Field (PHJR), near Honolulu, from which we’ve based for our visit. The island of O‘ahu on which Honolulu sits is three million years old. Moloka‘i is 1.3 million years old, as is the western side of Maui—but the eastern half of the island is a mere 750,000 years old. A new island, Lō‘ihi, will break the surface southeast of the Big Island of Hawai‘i in an estimated 50,000 years. It has just 3,000 feet to go.

The Hawaiian Islands evoke dreams of paradise for many of us, from around the world—but the most for those who call this volcanic sprinkle in the Pacific Ocean home. And by flying yourself around them, you gain a perspective that few tourists take away.

Pilots from all corners of the Earth visit the grave of Charles Lindbergh near Hana and leave tokens. [Credit: Stephen Yeates]

Unless you command a jet with the legs to cross half an ocean—or you take on a life-changing ferry flight—you’ll arrive in Hawai‘i at one of four primary airports. Most visitors fly into Daniel K. Inouye International Airport (PHNL) in Honolulu. Though Kalaeloa once served as the primary airport, the newer and larger PHNL lands you a little closer to the city in which nearly one-third of Hawai‘i’s population resides.

While there’s some general aviation activity at PHNL, most light aircraft on O‘ahu base at Kalaeloa or Dillingham Airfield (PHDH)—also known as Kawaihāpai—on the North Shore. The State of Hawai‘i owns the public-use airports on the islands, and hangar space is at a premium, as you might guess. The manner in which the state manages hangar leases makes the majority of our aircraft accommodations on the mainland feel generous. According to resident pilots, the hangar lease can be terminated by the state with 30 days of warning without cause, making it difficult to manage a business.

A great first day of flying—after you’ve recovered a bit from the flight over from the continental U.S. or else-where—takes in O‘ahu, departing from Honolulu International or Kalaeloa. Rain showers come daily but often stay over the highlands, making for VFR days that are ideal for a scenic tour.

As you fly around the island, you’ll take in Diamond Head, Sacred Falls, Kāne‘ohe Bay, the North Shore—and you can choose to circle clockwise or counterclockwise. The passage up the windward side of O‘ahu, north of Kāne‘ohe Bay, takes you past Kualoa Ranch where Jurassic Park was filmed in the early 1990s. It’s not hard to imagine raptors joining you to soar above the highlands or that you could look down to see a Tyrannosaurus Rex stomping across the green acres below.

You may also choose to end your circumnavigation with a return over the base at Wheeler Army Airfield (PHHI) on the island’s high central plain and the Dole pineapple fields. You’ll glide back into the Honolulu metro with a descent that takes in Pearl Harbor and Ford Island, where the USS Arizona rests in memorial—and you may see a few rainbows along the way.

Rain showers come daily but they often stay over the highlands, making for VFR days that are ideal for flying a scenic tour of an island—and for capturing a rainbow or two in the lens. [Credit: Stephen Yeates]

On the ground, the Pearl Harbor Air Museum at Ford Island attracts aviators—but you need to plan a bit, as you are not allowed to take even a purse onto the active military base at this time. Your journey begins at the visitor center to the base, where buses take you to the museum, or the USS Arizona, or the USS Missouri, where the Japanese command signed the terms of surrender at the close of World War II. You need to check everything—but your phone and a camera (no bag)—for a small fee, as visitors are warned not to leave valuables in their cars. While violence is rare on the islands, petty theft is not.

Dillingham—a military airfield leased to the state for public use—has been under the specter of closure, but for the time being, that threat has subsided. That’s good news for those based there, as well as the skydiving and glider operations that call the airport home. If you’re flying over from the other side, be on the lookout for the active drop zone—and perhaps stop in at Skydive Hawai‘i or Pacific Skydiving Center for a jump of your own

From O‘ahu, it’s easy enough to cross the stretches of cobalt blue water to the Neighbor Islands, as they are referred to by locals. One highly recommended trip takes you along the north coast of Moloka‘i—which lies between O‘ahu and Maui—and past the stunning Moloka‘i cliffs. If you want to land on Moloka‘i, there are essentially two choices: the main Moloka‘i Airport (PHMK) or Kalaupapa (PHLU). The latter lies on the northern shore of the island, and it’s adjacent to the former leprosy colony to which Hansen’s disease patients were exiled in the 1960s. A few residents remain, and those who land at Kalaupapa must stay on the airport property—there are no services there.

It’s not far from those epic cliffs to Maui, where you could easily spend several days adventuring with hikes up the main shield volcano, Haleakalā, and surfing—or eating, drinking, and relaxing. The primary international airport, Kahului (PHOG), also hosts a resident GA population, including Maui Aviators. Owner Jon Muralt moved to Maui about 25 years ago, and he keeps a couple of Cessna 172s available to rent after a short checkout (see “Renting an Airplane in the Islands” below), as well as a flight school.

With a 172, you can make the flight to Hana (PHHN), on the far northeastern point of Maui, thereby skipping the coastal road to the site best known to pilots as the final resting place of Charles Lindbergh. The famous aviator and his wife, Anne Morrow Lindbergh, moved to Maui in the 1950s to gain a sliver of privacy—and explore the natural world that intrigued them as much as aviation did. When they made the move, the remoteness of their island home was drawn sharply clear by the oft-impassibility of the winding four-wheel-drive road to get there.

Now, the road is paved, but the 36-mile drive still takes nearly two and a half hours to traverse. It’s marvelous, though, and interlaced with crashing waterfalls and stunning overlooks. If you drive, pick up lunch at the Paia Fish Market just a few miles towards Hana on Highway 36 after you leave Kahului airport.

Lindbergh’s gravesite lies on the grounds of the peaceful, modest Palapala Ho‘omau Church, about 8 miles past Hana, where he was interred after passing away from cancer in 1974. Pilots who have come before have left small talismans, including airline and military wings, as well as miniature airplane models. If you wish to explore further, the Wai’ānapanapa State Park nearby uses a reservation system, so plan ahead if you plan to hike or pursue other activities during your visit to Hana.

Back in Earth sciences class in middle school, perhaps you learned about the eight terrestrial biomes of the world, from the tropical wet forests to arid subtropical deserts. Hawai‘i hosts seven of those eight, and nowhere on the islands is the delineation between the dry and the wet so distinct as it is on the Big Island of Hawai‘i.

If a visitor lands at Ellison Onizuka Kona International (PHKO) on the west coast, they see the black, almost foreboding landscape laid bare by the volcanoes that still erupt on this, the largest of the islands. If instead, you land first at Hilo International (PHTO), on the east coast, you’ll descend directly into what the locals call “the jungle.” In the interior lies Waimea—and the town sits nearly on the dividing line between the lava and the jungle. The Waimea-Kohala (PHMU) Airport hosts local resident aircraft, and ‘Upolu (PHUP) on the northernmost point is the scene for an annual fly-in.

Either way you arrive, there are volcanoes and caves to explore in the interior, along with hikes to various points on the island. Every week on Wednesdays and Saturdays, the farmers’ market in Hilo bursts at the seams with produce, dry goods, and artisan crafts to peruse. The Kaumana Caves make an interesting stop on the drive over the Saddle Road of the island, Route 200, a little more than 4 miles outside of Hilo.

Flying Your Airplane to Hawai‘i

Our mount for the mission flew over on her own wings. Elizabeth, photographer Jim Barrett’s trusty 1962 Cessna 201B, has been his loyal companion for 17 years. When he made plans to move to Hawai‘i in 2021, he knew she had to come along—and after an extensive panel refurbishment inside and new paint outside, he couldn’t bear the thought of taking her apart to ship her to Honolulu by container. So, he began to plan for his most epic flight ever.

Barrett has completed many long-endurance flights using the 210’s factory-installed extended-range tanks, often making the journey to Oshkosh, Wisconsin, from his past base in Orlando, Florida, in seven straight hours. But this 2,104 nm journey would take twice as long if the winds were favorable—to go from Watsonville, California (KWVI), the closest point on the mainland, to his new base at Honolulu’s Kalaeloa/John Rodgers Field (PHJR).

He carried a flexible ferry tank bladder that gave him an additional 66 gallons of fuel on top of the 80 gallons Elizabeth normally drinks from. He set up a then-required HF radio complete with wire antenna from head to tail, and tail to wing—but used his InReach subscription to relay messages to his ground-based flight crew, friend William Diaz.

After a couple of proving flights to get the airplane from Orlando to the West Coast, Barrett waited for more than two months in order to get just the right weather and winds for the trip. Once he made the decision to launch, he departed at 6:16 a.m. Pacific time, landing at PHJR at 6:16 p.m. Hawai‘i time on June 6, 2021—with 15.2 hours going into his logbook. During the crossing, he talked with several airline crews—the most frequent question? “How did you fit your cajones in that airplane?” Upon coming into Honolulu’s airspace, ATC had a revision to his direct-to style flight plan—to which he said, “Unable.” Though he had plenty of fuel (he landed with 21 gallons remaining), he was in no mood to zig-zag the final miles to his destination.

He kissed the ground outside of the hangar and snapped a picture of the moment—Elizabeth is a permanent Hawai‘i resident now.

Renting an Airplane in The Islands

For scenic helicopter tours of the islands: Rainbow Helicopters (PHNL)