Celebrating the 75th Anniversary of the U.S. Air Force 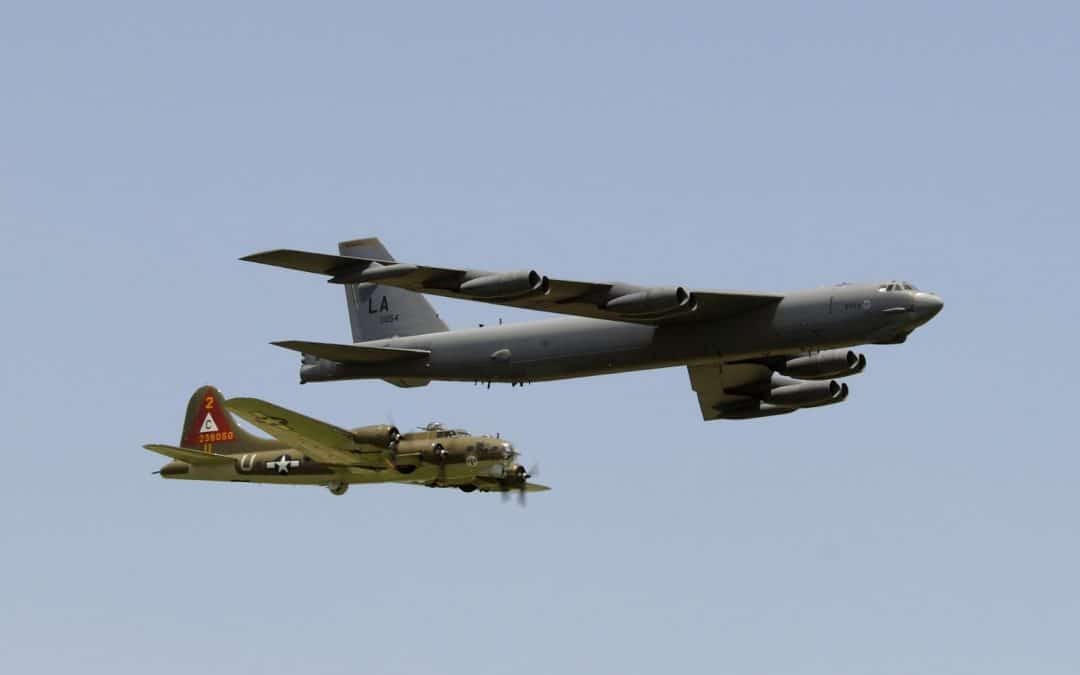 Millions across the nation and around the world celebrated the 75th anniversary of the United States Air Force on September 18, 2022. FLYING also celebrates this “birthday” and salutes the men and women who serve—and who have served—as members of the U.S. Air Force and its predecessors.

Orville Wright made the world’s first controlled, powered, and sustained heavier-than-air human flight on December 17, 1903. Less than four years later (August 1, 1907), the U.S. Army Signal Corps formed an Aeronautical Division. It was put in “charge of all matters pertaining to military ballooning, air machines and all kindred subjects,” according to the Council on Foreign Relations. The division was the first heavier-than-air military aviation organization in history and the beginning of what eventually became the U.S. Air Force.

Second Lt. H.H. Arnold sitting at the controls of a Wright Type B two-seater at the Wright Flying School in Dayton, Ohio in 1911. Arnold would go on to hold the ranks of General of the Army and later, General of the Air Force (the only officer to hold a five-star rank in two different U.S. military services.) Arnold was an aviation pioneer, Chief of the Air Corps (1938-1941) and commanding general of the United States Army Air Forces during World War II. [Courtesy: USAF]

The 1st Aero Squadron comprised the “first military unit of the U.S. Army devoted exclusively to aviation,” as designated on December 8, 1913, according to Air Force Materiel Command. It was the U.S. Army’s first air combat unit. Now it’s known as the 1st Reconnaissance Squadron, remaining active since its creation.

Congress authorized the Signal Corps’ Aviation Section, and directed it to operate and supervise “all military aircraft, including balloons and aeroplanes, all appliances pertaining to said craft, and signaling apparatus of any kind when installed on said craft,” according to the Air Force Historical Research Agency (AFHRA). It also would train “officers and enlisted men in matters pertaining to military aviation.”

When World War I began, the 1st Aero Squadron was the U.S. Army’s entire tactical air strength. Congress appropriated $500,000 for the Aviation Section on March 31, 1916. Influenced by the war, Congress appropriated over $13.6 million for military aeronautics and land acquisition for airfields on August 29, 1916.

According to the Air Force Historical Research Agency, by October 1916, Aviation Section plans included 24 squadrons. By December, seven squadrons had been organized or were in process. Of the squadrons formed by early 1917, only the 1st Aero Squadron was fully organized and equipped when America entered the war on April 6, 1917.

The first U.S. aviation squadron entered combat in February 1918, staffed mostly by pilots who had previously volunteered with the French. American-trained squadrons soon joined the fighting.

Demobilization and the 1920s

“During most of the 1920s, the total offensive strength of the Air Service” in the continental U.S. was one pursuit, one attack, and one bombardment group, according to the AFHRA. The Panama Canal Zone and the Philippines each had one pursuit and one bombardment squadron; two squadrons of each type remained in Hawaii.

The Air Service became the Air Corps through the Air Corps Act of 1926, but little else changed. The Air Corps had 919 officers and 8,725 enlisted men; its “modern aeronautical equipment” consisted of 60 pursuit planes and 169 observation airplanes, according to AFHRA.

Despite limited funding, the Air Corps focused on setting new records in altitude, speed, endurance, and distance, helping focus the nation’s interest on the potential of military aviation and earning international prestige.

During the 1920s and 1930s, U.S. aircraft manufacturers led the world in passenger aircraft development. In particular, numerous U.S. and foreign airlines purchased the Boeing 247 and Douglas DC-2 and DC-3. Meanwhile, Germany and Japan focused on building more powerful warplanes.

Japan invaded Manchuria in 1931 and China in 1937, with a clear advantage in aircraft and mechanized weapons. Germany “tested” its aircraft during the Spanish Civil War, assisting Nationalist forces under Francisco Franco. In September 1938, Luftwaffe aircraft supported German ground forces that occupied Czechoslovakia’s Sudetenland.

President Franklin Roosevelt worried about the United States being drawn into the war. He also believed in the growing importance of airpower, and according to advisor Harry Hopkins, Roosevelt believed “that airpower would win it,” according to AFHRA.

President Roosevelt requested 10,000 airplanes for the Air Corps from Congress on January 12, 1939. On April 3, Congress authorized $300 million for an Air Corps “not to exceed 6,000 serviceable airplanes,” according to AFHRA, to make up for lost time.

But when war began the Air Corps had only 800 first-line combat aircraft. U.S. fighter aircraft were inferior to those flown by the British, Germans, and Japanese. In late 1940, newspaper publisher Ralph Ingersoll visited England and wrote that the “best American fighter planes delivered to the British are used either as advanced trainers—or for fighting equally obsolete Italian planes in the Middle East.”

The P-38 Lightning helped change the tide of the war in the Pacific Theater. [FLYING Archives]

The War Department began building bases and air organizations in the continental U.S. and overseas in 1939. During this expansion and reorganization, “the Hawaiian Air Force was activated on November 1, 1940, the Panama Canal Air Force on November 20, 1940, and the Alaskan Air Force on January 15, 1942,” according to AFHRA. (These subsequently became the Seventh, Sixth, and Eleventh Air Forces.)

By the end of the war, the USAAF had 16 numbered air forces (First through Fifteenth and Twentieth), distributed worldwide to prosecute the war, plus a general air force within the continental U.S. to support the whole and provide air defense.

“…the first priority [was] to launch a strategic bombing offensive in support of the RAF [Royal Air Force] against Germany. The Eighth Air Force, sent to England in 1942, took that job. After a slow and often costly effort to bring the necessary strength to bear, joined in 1944 by the Fifteenth Air Force stationed in Italy, strategic bombing finally began to get results, and by the end of the war, the German economy had been dispersed and pounded to rubble.

“Tactical air forces supported ground forces in the Mediterranean and European theaters. In the war against Japan, Gen. Douglas MacArthur made his advance along New Guinea by leapfrogging his air forces forward and using amphibious forces to open up new bases. The AAF also supported Adm. Chester Nimitz’s aircraft carriers in their island-hopping across the Central Pacific and assisted Allied forces in Burma and China.

A B-29 Superfortress. [Courtesy: USAF]

“…the Twentieth Air Force [was] equipped with the new long-range B-29 Superfortresses used for bombing Japan’s home islands, first from China and then from the Marianas. Devastated by fire-raids, Japan was so weakened by August 1945 that [Gen. H.H.] Arnold believed neither the atomic bomb nor the planned invasion would be necessary. The fact that AAF B-29s dropped the atomic bombs on Hiroshima and Nagasaki demonstrated what air power could do in the future.”

As it had when World War I ended, U.S. armed forces immediately began a massive demobilization following the surrender of Germany on May 7, 1945, and Japan on August 15, 1945. In the AAF, “officers and enlisted were discharged, installations were closed, and aircraft were stored or sold,” according to AFHRA.

In February 1946, General H.H. “Hap” Arnold, AAF commanding general, retired due to ill health. Gen. Carl A. Spaatz succeeded him, reorganizing the AAF into major commands not requiring a second restructuring once the Air Force became independent. Additionally, he restructured reserve components, including creating the Air National Guard in April 1946.

By April 11, 1945, 80 “key military and naval personnel” had been interviewed by the Joint Chiefs of Staff Special Committee for the Reorganization of National Defense, according to history.defense.gov. Their recommendation? That U.S. armed forces should be organized into a single Cabinet department, and that “three coordinate combat branches—Army, Navy, and Air” comprise the operational services. The committee noted that the “statutory creation of a United States Air Force would merely recognize a situation that had evolved during World War II with the Army Air Forces.” The measure saw broad approval.

Nonetheless, the Navy Department opposed a single Department of Defense and creation of a separate Air Force during congressional hearings. On December 19, 1945 President Harry S. Truman declared his strong support for an air force, “reminding Congress that prior to the war independent Army and Navy departments had often failed to work collectively or in coordination to the best interest of the nation,” according to AFHRA.

With President Truman’s endorsement, Congress enacted the National Security Act of 1947 on July 26, 1947. The Department of Defense, the United States Air Force and Central Intelligence Agency were established.

Stuart Symington was sworn in as the first Secretary of the Air Force by Chief Justice Fred Vinson on September 18, 1947. (Photo: National Museum of the United States Air Force)

On September 18, 1947, Stuart Symington became the first secretary of the Air Force. This officially founded a new U.S. military branch. Gen. Spaatz became the U.S. Air Force’s first chief of staff on September 26, 1947, overseeing both the demobilization of the largest air force in military history and its rebirth as an independent branch.

“The Army Air Forces in World War II” is the official history of the AAF, stating, “By the close of the war [the AAF] had emerged as virtually a third independent service.” This was almost inevitable after the AAF became an autonomous U.S. Army Command in 1942. At its height, the AAF had more than 2.4 million people and 80,000 aircraft in service and flew more than 2.3 million missions during the war.

Today, the Air Force has over 300,000 active duty troops, with approximately 20,000 pilots, according to veteran.com.

A P-26A in the livery of the 19th Pursuit Squadron, Wheeler Field, Hawaii. [Courtesy: USAF Museum]

The post Celebrating the 75th Anniversary of the U.S. Air Force appeared first on FLYING Magazine.