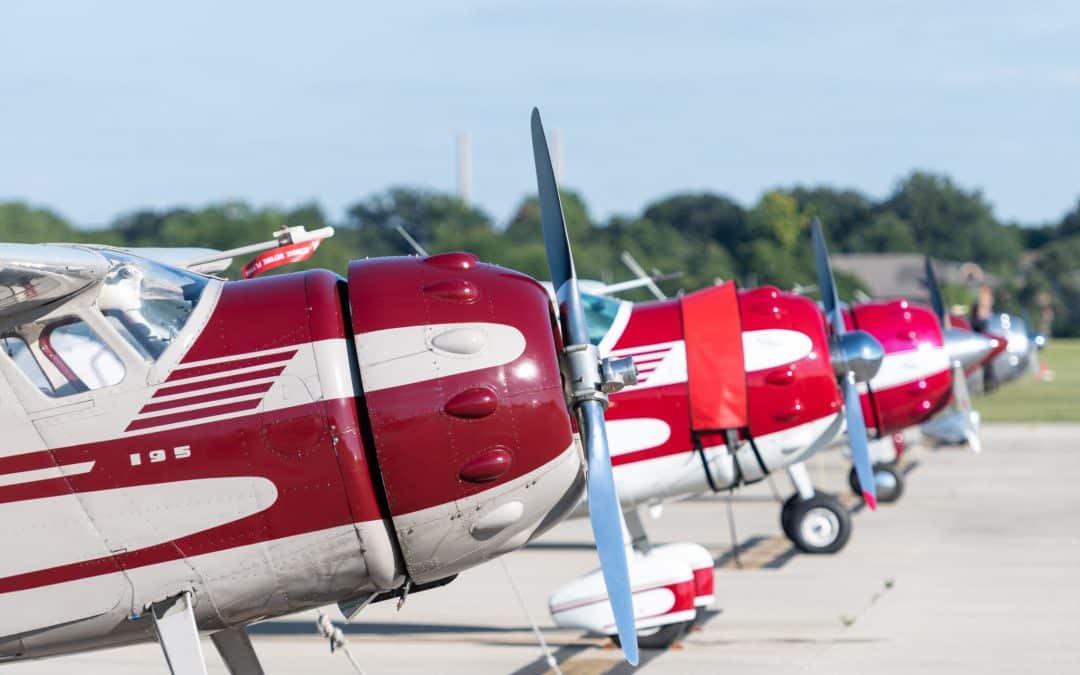 In 1947, Cessna Aircraft Company advertised the new Cessna 190 and 195 models as “high-performance, executive-type, personal planes designed to give maximum safety, comfort, and efficiency for those who are proud to own the finest 4-5 place plane on the market.”

Now, 75 years later, this is still true—and those who own them are definitely proud of being the current caretakers, and they know how to celebrate that.

The 51st annual International Cessna 195 Convention was held in Joliet, Illinois (KJOT), September 7-11. It was a people-focused weekend for the 195 families celebrating 75 years of the Cessna Businessliner, with 32 Cessna 195s in attendance. In addition, there were 22 states represented, along with two airplanes from Canada.

To fire up the convention, on Wednesday, Chairman Chris Thomsen hosted a welcome barbecue at his home in Meadow Creek Airpark (2IL9). This was the first stop for many on their way to KJOT.

The next day, about 25 of the 195s participated in a fly-out to Brodhead (C37) to kick off the Midwest Antique Airplane Club (MAAC) grassroots fly-in. The spectacular Kelch Aviation Museum was enjoyed by many during their visit. Afterward, outside the Holiday Inn at Burger Theory, folks spent an evening at the hotel sharing stories (and lies) with fellow 195 club members along with burgers and drinks. For those with extended-range tanks, the hospitality suite offered late-night libations.

On Friday, club members attended a maintenance seminar. Many of them said they were impressed by the professionalism of the training. It consisted of three hands-on 45-minute sessions that participants cycled through.

First, Jeff Pearson offered a workshop on prop-seal installation. Then, at the same time, Caleb Curry of Radial Engines did a session on ignition inspection and timing on the magneto and distributor. Finally, Darren Butcher led a discussion on “hot topics,” including landing lights, tailwheels, new gear legs, flyaway kit contents, and prop servicing. Three of the attendants volunteered their airplanes. They were literally taken apart—and luckily put back together!

For the non-pilot companions, some fun activities were offered simultaneously, including shopping and lunch in nearby Naperville.

A five-ship formation flight was the highlight of the afternoon, and a photo session in preparation for an upcoming feature in FLYING. The members enjoyed traditional Chicago pizza and a surprise performance by the Blooze Brothers band that evening. Many danced until the music stopped!

The final day featured a fly-out to the beautiful fly-in community of Poplar Grove (C77). Fourteen Cessna 195s made the journey and were treated to hangar tours, engine shop tours at Poplar Grove Airmotive, the Vintage Wings and Wheel Museum, and enjoyed a taco lunch at the pavilion, hosted by Jim and Val Slocum. The Thomas family—owners and operators of the airport—were gracious hosts. They have created a fun, friendly neighborhood atmosphere for people in aviation at Poplar Grove.

The convention banquet was held on Saturday night aboard the Spirit of Chicago. The 190-foot vessel departed from the Navy Pier in downtown Chicago. The weather for the dinner cruise was perfect, and the Chicago skyline offered spectacular views. Unfortunately, several aircraft were forced to fly out early with the poor weather forecast for Sunday and missed the Saturday activities.

Co-hosts Chris and Heidi Thomsen, Will and Nila Saloga, and Coyle Schwab executed a successful, fun, and safe gathering for the International Cessna 195 Club Family.

Cessna’s marketing department forgot to add one crucial characteristic of the 190-195s in their brochures, “class,” not only for the airplane, but also for its owners. The 51st annual International Cessna 195 convention was representative of that.