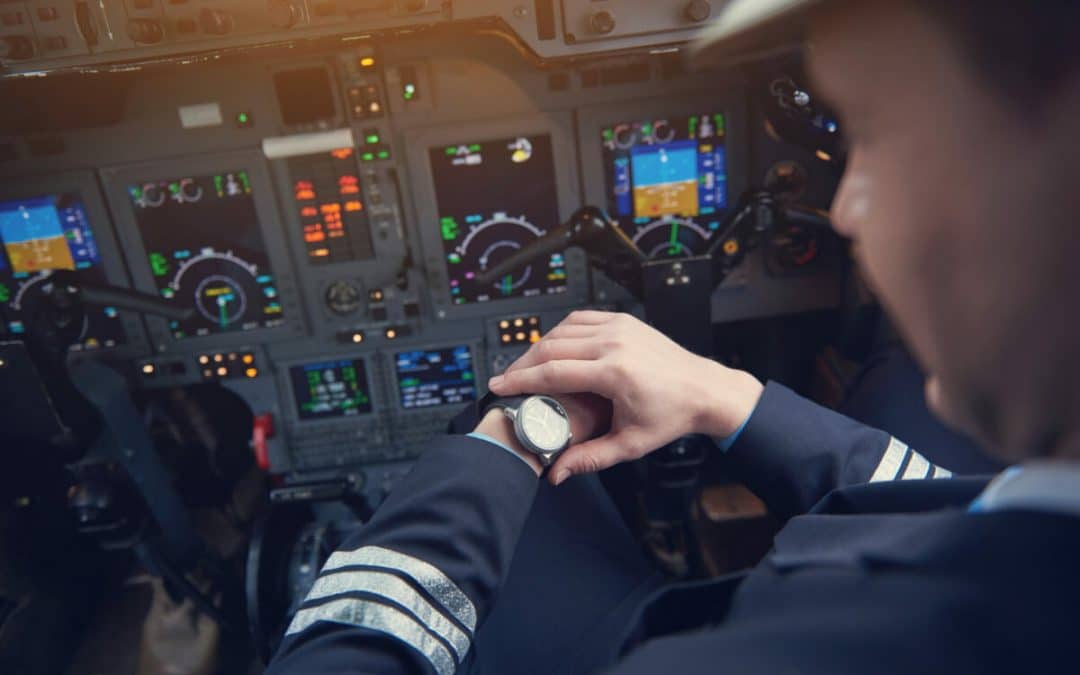 A timepiece of some kind is required equipment for pilots, as it is critical for determining ground speed, aircraft fuel endurance, and deduced reckoning (aka “dead reckoning,” a topic for another feature). Since the invention of the smartphone, wrist-mounted timepieces have waned in popularity, although some pilots still prefer them, as do flight departments that have rules on the appearance of the watch. While you can use the clock in the instrument panel—it does work, doesn’t it?—a watch may be easier to manipulate while you’re in flight.

If you choose to wear a watch when you fly, the type of watch you select is very much like choosing an airplane—you must evaluate the mission, the functions provided by the timepiece, the aesthetic options of the device, and the price. And they don’t have to take up your entire wrist to work well.

The name Garmin is synonymous with aviation—it’s hard to find an aircraft that doesn’t have a piece of Garmin tech on the flight deck. Garmin introduced smartwatches to the aviation world in 2013 with the D2 Pilot Watch. It stepped up its game in March 2022 with the introduction of the Garmin D2 Mach 1.

According to Garmin spokesperson Carly Hysell, “The D2 Mach 1—and Garmin’s full D2 smartwatch line—are definitely targeted to aviators and aviation enthusiasts, but the series also attracts non-pilots/enthusiasts who want a smartwatch with aviator styling.”

I was given the opportunity to test-fly the Garmin D2 Mach 1 model shortly after its release. I first encountered the Mach 1 model at the Aircraft Electronics Association International Convention and Trade Show.

Full disclosure: I have bad luck with watches. The Mickey Mouse watch I got for my eighth birthday didn’t make it with me to 8 and a half. The sports watches I had in high school (three in all) didn’t make it to college. For the amount of money I have spent on watches over the past 20 years, I could easily finance a cruise down the Rhine. I was wary about wearing the D2 Mach 1—which has a price tag of $1,199 for a leather watch band, and $1,299 if you opt for titanium.

I shared this information with Hysell, who quickly showed me the Garmin smartwatch she wore on her wrist and called her coworkers over to show off their D2 Mach 1 watches and extol their virtues—one of which is that it is rechargeable. This is important since one of my special talents is running down watch batteries before their time—and then the watch usually self-destructs from the inside.

The Mach 1 is basically a multi-function computer that’s small enough to fit on your wrist. The face is larger than the women’s pilot watch I have been wearing since 2013 (the Amelia, produced by the Abingdon Watch Co.—more on them later—the watch earned the designation “Meg Proof” in December 2021). The size of the Mach 1 concerned me as I have worn other pilot watches that felt like boat anchors. The Mach 1, however, is surprisingly light and has a plethora of apps. Because it is a Garmin product and Garmin is synonymous with digital flight deck tools, expect to find a watch that includes apps for weather, health assessment, and navigation.

The Mach 1 has a round dial that has both digital and analog numerical presentations that, with one touch, can pull up multiple functions ranging from the ability to receive automatic alerts for changing weather conditions, METARs, and—when paired with the Garmin Pilot app—navigation. The health apps on the watch include a Pulse Ox3 sensor to monitor your blood oxygen levels and a barometric altimeter for altitude alerts. According to Garmin, using the Health Snapshot feature, the wearer can monitor their sleep, track respiration, monitor energy, track hydration and all-day stress, and monitor their heart rate 24/7. It appeared the Mach 1 could replace my analog pilot watch, smartphone, Garmin GPS, and Fitbit in one fell swoop.

Like other Garmin products, there are video tutorials online to help you get the most out of the device. You can set it up for the apps you want the most. I spent part of the test with the watch configured to deliver email, but then canceled that because it made it difficult to disengage from work. Instead, I focused on the best apps for the cockpit.

I wore the Mach 1 on several flights. As the aircraft I was flying had only one radio, I found it most useful as a device for checking weather along the route. While my client was busy flying and talking to ATC, I was pulling up the METARs and TAFs on my wrist. It was a scattered-clouds day, and we flew in and out of direct sunlight, yet I was still able to read the face of the watch. If you have had to do an advanced yoga pose to see the face of your tablet clearly in a sun-filled cockpit, you will appreciate this.

While my learner focused on flying in VFR conditions, I monitored our progress on the Mach 1 moving map. The device also has a horizontal situation indicator utilizing the worldwide database. I am not sure I’d be able to shoot an approach off my wrist, but it would be most useful for situational awareness if the instruments in the panel and the iPad tanked during IFR flight.

One of the best apps provides weather alerts—it was nice to get a heads up about approaching thunderstorms—they were moving a lot faster than the morning weather briefing suggested they would be.

Another bonus, the watch has an electronic version of the chart supplement, providing information about runway orientation, lengths, wind components, and airport frequencies.

For efficiency, the Garmin Mach 1 can be connected to the Garmin Pilot app to transfer flight plans to the watch, and it has the ability to log your flights directly on the watch.

By the end of the test, I also pronounced the watch “Meg Proof.”

Putting on my CFI hat: One of the benefits of the analog timepiece is that it helps teach the learner where to look for traffic, as ATC issues its notifications using an analog clock in reference to the aircraft. Over the last 10 years, I have noticed a decrease in the number of people who can tell time with an analog timepiece—I learned of this paradigm shift during a morning flight when ATC warned us of traffic at 3 o’clock and the learner asked why the controller was warning us about traffic in the future? Just as the ability to read and write cursive has become a lost art, the ability to tell time with an analog device is becoming generational. The terms “big hand” and “little hand” are being lost to the ages.

Sometimes your vocation determines what kind of watch you wear. People who work in security-sensitive industries, such as law enforcement or the military, are often prohibited from using any smart devices while on the job because most apps are geographically trackable. You’ve probably seen this function before—which is why all those geographically appropriate advertisements start popping up on your social feeds after you search for a place, service, or thing.

The need for a non-trackable yet sturdy timepiece was behind the development of the Jane Tactical Watch by the Abingdon Watch Company based in Las Vegas, Nevada. The company was established in 2007 by Chelsea Abingdon Welch (now Mullin), an aspiring pilot at the time who sought to create a pilot’s watch for women—that evolved into designing and creating watches for “women who do more,” as the website states. There is a line of watches designed for pilots, sportswomen, divers, motorsports enthusiasts—and now women involved in so-called tactical professions.

“Women in the military are a large share of the Abingdon Watch Co. audience,” Mullin explains. “The ‘Jane’ Tactical Watch was designed with them in mind. Some of the watches, such as the ‘Jackie,’ with its faux diamonds, and the ‘Marina,’ with mother-of-pearl face, can be a bit too blingy for women in uniform. They were looking for something they could wear with fatigues.”

A consortium of women made up of different branches of the military, competitive shooters, livestock farmers, and law enforcers spent eight months creating the Jane Tactical Watch.

“These women didn’t know each other, but they all wanted a watch for them. Women like this are very often an afterthought when it comes to watch design,” Mullin says.

The face of the watch is about the size of a U.S. 50-cent piece. There is a ruler etched on the caseback and strap, and the watch is water resistant to a depth of approximately 200 meters. The watch features a stainless steel case, a bi-directional compass inner bezel, a unidirectional diver’s outer bezel, and two screw-locked double-gasket crowns.

The watch features Ameriquartz caliber 7122 movement with day and date functions. American movement was key, notes Mullin, adding, “It is our number one selling watch right now, and this is the first watch to have all American movement in more than 50 years. The watch was designed to be both useful and elegant.”

I opted to test-fly the Mission model. I chose the rubber watchband for durability and comfort—other options include leather, lizard-skin, and metal. One of the first things I did after setting the watch to the correct time was to head outside and use the position of the sun and the analog watch face to determine north. It’s basic, but I learned it in the Girl Scouts and practice it on a semi-regular basis. Then, I tested the timing features along the diver’s bezel. The watch has a good weight to it—it feels sturdy without being overbearing— and for someone who is looking for a rugged timepiece that is straightforward and durable, this watch should work well.

Abingdon watches can be purchased online at Abingdonco.com and pilot supply shops—and also at Macy’s department stores through a recent marketing deal made with the historic retailer. The price for the Jane is around $629.

The Wristwatch Comes to America

The wristwatch became part of a pilot’s equipment thanks in part to its use on the battlefield during World War I. A watch was a necessary tool to be used for timing artillery shells; and before attacks, the soldiers would synchronize their watches. British soldiers had wristwatches, sometimes called “bracelet watches” by Americans who were still using pocket watches. Some American soldiers brought the wristwatches home from the war, having found them much easier to use than pocket watches, which were a bit cumbersome on the battlefield.

During the so-called “golden age” of aviation that followed the war, deduced reckoning, a time-dependent form of navigation, called for the use of a timepiece—and wristwatches gained popularity. In addition, the U.S. military issued basic windup watches, and one of the techniques taught to avoid the hazardous attitude of impulsivity was to wind the watch three times before acting.

The watch must be operational and the time accurate for this to work.

1) Lay the watch flat horizontally in your palm, with the watch face up.

2) Position the watch so the hour hand is pointing directly at the sun.

3) Note the angle between the hour hand and the 12 o’clock mark. The center of the angle marks the north-south line, with south on the side closest to the sun.

Please remember that this information is in standard time. Daylight Savings Time is a government construct that the universe does not follow; ergo, when the watch is set to DST, substitute 1 o’clock for 12 o’clock.