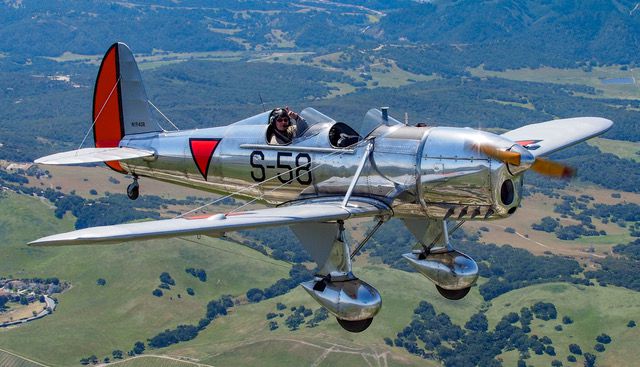 I found this Ryan STM 2 in the weeds behind the Manila, Philippines, airport. It has an interesting history. Built by Ryan Aeronautical in 1940 and shipped to Dutch Java in December 1940, it was on floats in the Dutch Navy. It was then shipped to Australia after the invasion by the Japanese. It served the rest of the war in the RAAF on wheels as a trainer. After the war, it went to Hong Kong to a private school, then to Manila, where it crashed in the 1950s and was left for junk. I bought what was left in 1975 and shipped it to San Francisco, CA. It now lives in San Luis Obispo, CA. – Robert De Vries

This 1943 Stearman was delivered to NAS Norman, OK, on June 19, 1943. Meticulous restoration was supervised by WWII plane captain, Harry Halijian, (who was on the USS Yorktown when it went down at Midway) and completed by Vintage Wings and Wheels in 2007.

Since then, my history with the aircraft includes two coast-to-coast cross countries plus five AirVenture appearances. Its Oshkosh debut resulted in the EAA Lindy award for master craftsmanship. This honor is paired with the Watsonville Air Show Grand Master Award. Contributing to such awards are six STCs and fifteen 337 modifications. This is one of the most highly modified Stearmans in existence.

When not traveling the U.S. or performing aerobatics, it has flown lead and wing in Stearman Flight formation teams since 2007. – John Hodgson

Flown by many. Preserved by a few. Shared with whoever wishes to fly the old way, stick and rudder, low and slow. – Rick Hingtgen

In the photo above, we had just left Alaska in our 1954 Cessna 170B, and were waiting at Beaver Creek for Canadian Customs to clear us in the morning. – Paul & Shelly Tappen

Two full restorations later, N159K is back in her glory! I happened to land at Wiley Post airport in 2019 on the way back from a trip out west with my wife and kids and was shown the hangar she was built in and the hangar she was painted in – still there on the field. The conversation ended up in me leaving N159K there for 6 months where she underwent a full strip and paint, extensive work to put the sheet metal in like new condition, engine overhauls at Barrett Precision Engines, and a new paint job!

The paint scheme is a combination of two of the original 1959 paint schemes in original colors. We even installed new seatbelts with engraved Twin Commander buckles. In the front, we installed shoulder harnesses and Airsafe Airbags on both seatbelts. She’s getting a new Genesis 3100 autopilot and another Aspen Promax screen with Flight Director and electric trim this spring.

In 2019, she won Best Contemporary Twin at Sun ‘N Fun and last year won Most Unique Outstanding Vintage Twin at Oshkosh AirVenture. I fly N159K about 100 hours a year mostly back and forth from my home in Ponte Vedra Beach, FL, to Ashe County Airport (GEV) in the mountains to our second home, although there have been many, many Bahamas trips, Haiti missions, and several round-the-USA adventures exploring with my kids and friends! This summer the goal us to hop the pond via Greenland and Iceland to visit one of my best friends in Norway. The adventures will continue for many years to come! – Blake F. Deal III

I bought this 1963 Piper Colt as a total basket case and did complete restoration in three years. With the help of a friend, we did all the work in my home shop. It is hangered at Sheboygan, WI. – Anthony Modra