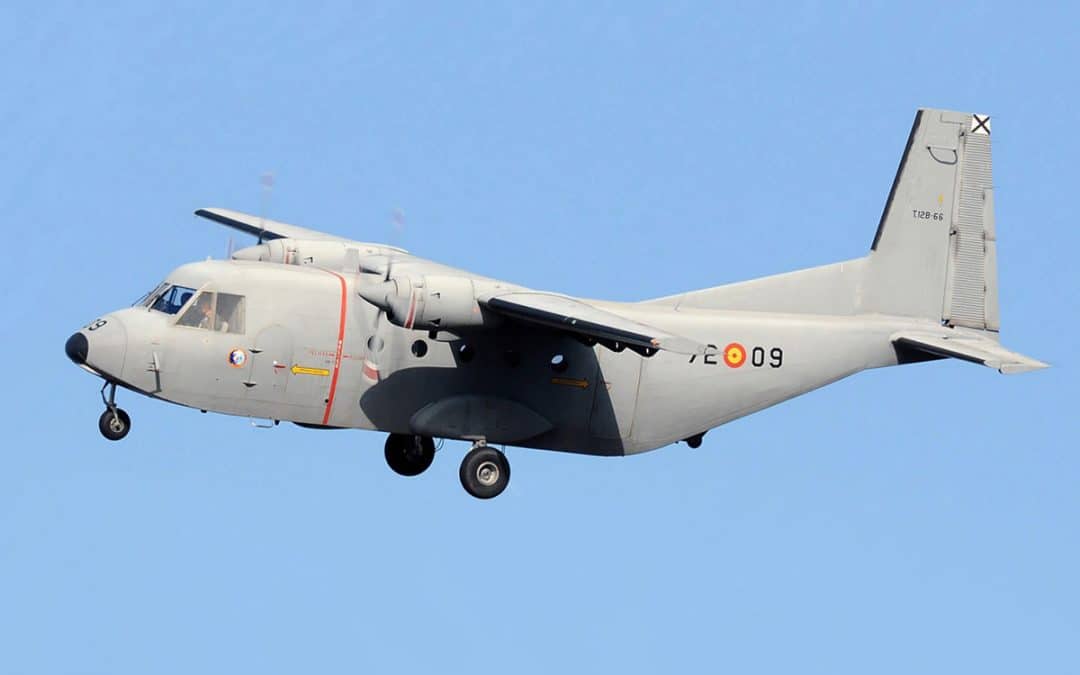 Federal authorities and those in Wake County, North Carolina, are trying to determine the circumstances surrounding the departure of a non-parachute-wearing co-pilot from an aircraft in mid-flight heading toward Raleigh-Durham International Airport (KRDU).

The airplane had lost a wheel earlier in the flight and made a one-wheel landing leading to a runway excursion. The pilot, who remained onboard, suffered minor injuries.

The airplane, a Spanish made CASA C-212 Aviocar, is an unpressurized, high-wing, turboprop with fixed landing gear. Registered to Spore LTD, in Colorado, the C-212 is designed for cargo hauling and is popular with skydiving operations.

According to local authorities, the pilot and co-pilot were the only persons on board when the aircraft  took off from Raeford West Airport (NR20) around 1:10 p.m. Friday, July 29.

In  Live ATC recordings of conversations between the aircraft and air traffic controllers, a pilot aboard the C-212 (using the callsign Shady 2) is heard declaring an emergency, stating “We have lost our right wheel. We’d like to proceed to Raleigh and make the landing at Raleigh.”

In the recording, ATC confirms Raleigh-Durham is the desired airport and advises Shady 2 to resume its own navigation to Raleigh-Durham, some 78 nm away.

ATC asks for information about the home base of the aircraft, how many people were on board and the amount of fuel. The pilot’s transmission indicates there were two people on board and they had enough fuel for approximately four hours of flying.

Later in the transmission, ATC asks for verification that a wheel is missing from the aircraft as the result of a landing. The pilot replies, affirmative. Another voice replies, the wheel assembly has been found. A second voice from Shady 2 explains there was a hard landing and the aircraft went around “and at that point, we lost the wheel.”

A few minutes later the controller supplies Shady 2 with the telephone number for Fayetteville Approach to call when they are on the ground. The next transmission is Shady 2 checking in as they pass through 3,500 feet.

ATC responds, asking how the pilot intends to land at Raleigh-Durham. The pilot replies, “As slow as we can and I guess we’re going to put it on the belly.” ATC comes back with, “You’re not planning to put the gear down?” The pilot of Shady 2 replies that the aircraft is a fixed gear airplane and the right main wheel is missing.

The one-wheel landing of Shady 2 was captured on video. The aircraft touches down on the remaining wheel and veers into the grass. Local authorities reported that the pilot had minor injuries and was taken to a local hospital.

Local media and the Associated Press have identified the co-pilot as Charles Crooks, age 23. Crooks’ body was found in the backyard of a home about 20 miles from the airport, according to reports. Although reports said he departed the aircraft without a parachute, it has not been determined if Crooks fell or jumped from the C-212. Local media outlets interviewed family members who noted that Crooks loved to fly and was an experienced pilot.

Several people in the neighborhood said they heard something hit the ground, one person remarking that it sounded like someone slamming a trash can lid.

At this time, authorities say they’re baffled as to how and why Crooks departed the aircraft.

According to a local television station, the pilot told authorities that the co-pilot jumped from the airplane before landing, aiming for a lake as they flew over.

In a prepared statement, the FAA noted their focus is on the emergency landing made by the  twin-engine CASA CN-212 Aviocar, which landed in the grass between Runways 23L and 23R at Raleigh-Durham International Airport. The statement noted that the National Transportation Safety Board will oversee an investigation and will provide additional updates. The FAA added, “Neither agency identifies people involved in aircraft accidents.”

The accident investigation kept runway 5R-23L closed at KRDU for the better part of 24 hours.