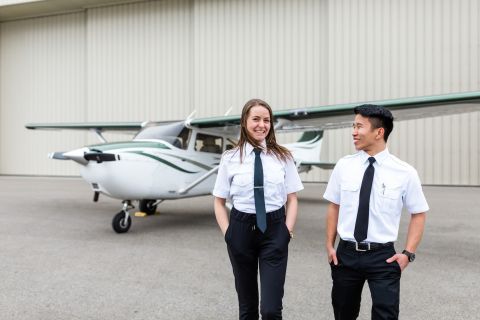 A sharp decline in new pilot graduations combined with increased demand from a flurry of new airline start-ups is creating an incipient pilot shortage that appears to be creating concern in Canada. Since 2019, the number of new commercial pilot licences issued has dropped from a relatively consistent 1,100 a year to less than 300 a year in 2021 and 2022 according to Transport Canada stats reported by CTV News. Transport Canada spokeswoman Sau Sau Li told the network labor shortages may cause “economic hardship” to airlines. Pilot shortages were cited by airlines as a factor in numerous mostly weather-related delays and cancellations over the Christmas holidays.

Li said the pandemic had a “significant impact” on staffing levels throughout aviation and the government has initiated programs to get training levels back in line. Tim Perry, who heads up the Canadian section of the Airline Pilots Association, said a lot of young people chose other careers when they heard about mass layoffs and job insecurity caused by the pandemic. He also said he believes the numbers will come back.

Aviation consultant Robert Kokonis told CTV there needs to be an overhaul of flight training in Canada. The high cost of training and the low pay many new pilots get in their first jobs has been compounded by high inflation and higher interest rates. He said airlines will have to start funding training to ensure a steady supply “because the pilot shortage in this country is real, and it threatens to be a real drag on the Canadian economy.”