Court Ruling Brings Sigh of Relief to Flight Schools, CFIs, but Not Immunity 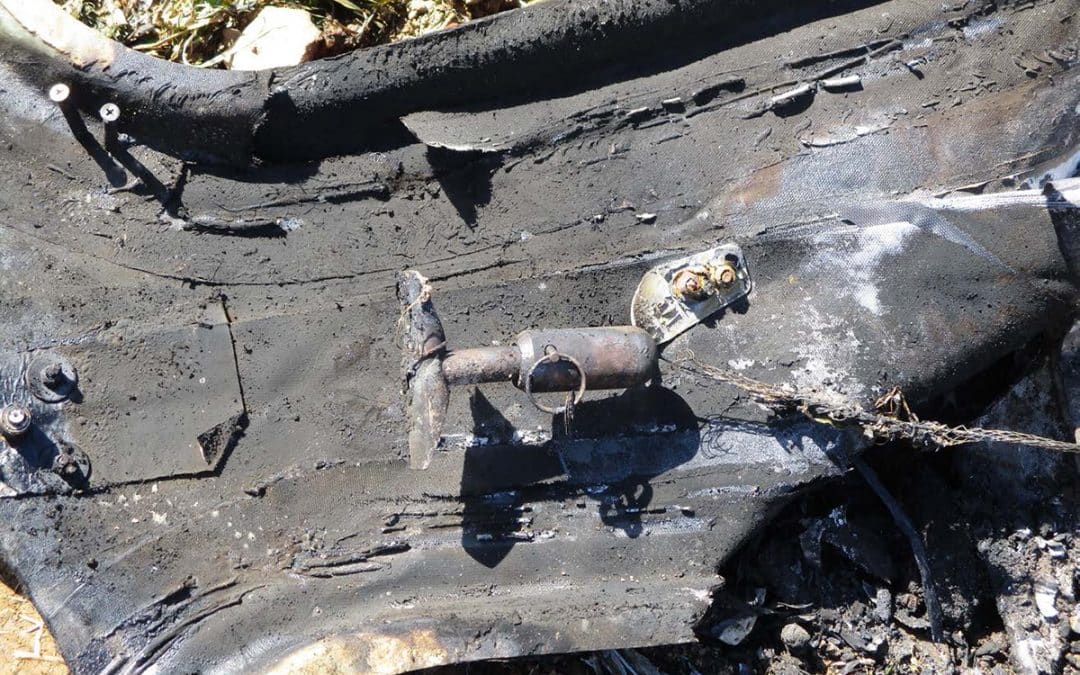 The innovative airplane parachute system installed in the Cirrus SR22 does not guarantee survival in an accident. Like any aircraft system, there are multiple factors that contribute to its success, including proper training.

When PIC James J. Durkin failed to deploy the Cirrus Aircraft Parachute System, or CAPS, installed in the 2001 Cirrus SR22 G1 he was piloting in 2018—and the aircraft crashed, killing Durkin and a passenger—it sparked a lawsuit that put flight schools and CFIs around the country potentially on notice.

In the initial complaint, filed April 4, 2020, in the Court of Common Pleas of Lancaster County Civil Division, Pennsylvania, the plaintiff, Patricia Grady, alleged that Aero-Tech Services, a flight school in Lancaster, and its employees, CFIs Zach Hurst and David Peachey, failed to adequately teach the CAPS system to PIC Durkin. Furthermore, Grady claimed in the suit that had Durkin received said instruction, the accident that killed Durkin and his passenger—her husband, Stephen Grady—“would not have occurred.”

In the end, the trial court dismissed the case, stating that the complaint “failed as a matter of law” because it was based solely on a theory of educational malpractice. The ruling stated: “Pennsylvania courts have not permitted cases of negligence resulting from alleged educational malpractice to persist.”

Grady appealed, however, to the Pennsylvania Superior Court. In March, the appellate court upheld the dismissal, adopting the lower court’s opinion as its own. Essentially, that the plaintiff lacked a legal cause of action. Now, Grady has filed a petition for allowance of appeal to the Pennsylvania Supreme Court. The Supreme Court is expected to rule on the petition in the next couple of months, said Laurie Salita, senior counsel of Skinner Law Group in Philadelphia, who represents Aero-Tech in the suit. “We obviously oppose the petition,” Salita said. Given the pending litigation, Salita and Aero-Tech were unable to comment further on the case.

Still, the Superior Court’s decision should give flight schools and CFIs a welcome sigh of relief—at least for now. FLYING delved deeper into the case to determine why the court ruled as it did and what it means for the aviation community, and will follow up once the Supreme Court decides on the plaintiff’s petition.

Upon making a left turn to prepare for approach to KAOO, the Cirrus SR22 G1 enters into a spiral, as shown in this representation of the aircraft’s flight path superimposed over a Google Earth map. [Courtesy NTSB]

The plaintiff’s husband, and Durkin, died on April 19, 2018, when the Cirrus SR22 Durkin was piloting crashed near Williamsburg, Pennsylvania. According to the National Transportation Safety Board’s accident report, Durkin took off from Lancaster Airport (KLNS) in Pennsylvania, en route for South Bend International (KSBN), Indiana. The flight plan was filed as a personal flight. After takeoff, Durkin asked to divert from his original flight plan to Altoona-Blair County Airport (KAOO), due to icing. The Cirrus was not equipped to fly in icing conditions, according to the NTSB report.

The NTSB listed the cause of the accident as “loss of control in flight.” Photos of the aircraft wreckage showed the CAPS safety pin on the activation handle intact and the CAPS activation handle in its holder. This would indicate that Durkin either was unable to or did not attempt to deploy the CAPS system. In the pilot’s operating handbook (POH) for the SR22, the “normal operations” pre-flight checklist calls for the pilot to remove the CAPS safety pin during “preflight walkaround,” and to verify its removal during the “before starting engine” checklist, and again, in the “before takeoff checklist,” the lawsuit states.

WATCH A VIDEO: FLYING Explained: How Does Ice Affect Your Aircraft

In the original complaint, the plaintiff, filing as the executrix and personal representative of her husband’s estate, alleged negligence on the part of CFIs Hurst and Peachey for not properly instructing Durkin in the CAPS system, and negligence on the part of the flight school for not ensuring that its flight instructors were qualified to train Durkin in the use of CAPS.

The airframe parachute of the CAPS-equipped Cirrus SR22 G1 lays among the wreckage at the accident site, apparently released by the impact and pressure of the collision with terrain. [Photo: NTSB]

According to Cirrus, CAPS has saved the lives of more than 60 people in 30 different loss of control flight situations since it was installed in Cirrus aircraft.

Following the court’s ruling to dismiss the complaint, the plaintiff filed an appeal, arguing that flight schools “teach a precise activity” that is “ultrahazardous,” and therefore, should be an exception to the state’s “educational malpractice doctrine.”

The Pennsylvania Superior Court wasn’t swayed. In denying the plaintiff’s alleged cause of action, the court reiterated the lower court’s ruling, that “[a] cause of action seeking damages for acts of negligence in the educational process must be precluded by considerations of public policy,” because (1) “there is no clear definition of the standard of care for a reasonably prudent flight school for instruction on airplane specific safety mechanisms;” (2) “it is difficult to determine if the Defendants’ instruction on a certain subject would have prevented the Plaintiff’s damages;” (3) it would cause a flood of litigation because “virtually every future plane crash will raise the specter of a negligent training claim against the flight school or aviation training center … for no other reason than they have an attenuated connection to the pilot’s actions on the date of the crash since the flight school provided the pilot the knowledge to become licensed by the FAA;” and (4) “[t]rial courts have no business meddling in the field of day-to-day educational standards of pilot schools,” particularly because “[f]ederal regulations clearly delineate standards for certification and operation of Part 141 schools,” per a synopsis of the case published by JD Supra.

According to Widener University Commonwealth Law School professor Greg Randall “Randy” Lee, J.D., in allegations of educational malpractice, schools and teachers tend to have an advantage.

Lee explained, “When people tell you there’s no cause of action for educational malpractice, what they’re normally saying is that if I’m in my classroom as a teacher doing my thing, and you don’t like the way that I did it, or you didn’t feel like you learned from it, can you sue me because I didn’t ‘subjectively do it better?’” That answer is generally, no, unless the teacher fails to teach something that’s statutorily required, he said, citing two cases in Montana that ruled in favor of the plaintiff (B.M. v. State of Montana; and Yellow Kidney, et al. v. Montana Office of Public Instruction).

“You can sue a pilot for exercising bad judgment when he’s flying the plane. He doesn’t have to do something illegal to have a problem. He can just exercise bad judgment and he can get sued for professional malpractice. But that’s not the way we treat teachers,” Lee said.

There are several reasons why the law gives latitude to teachers and educational institutions. Lee said these include:

“Malpractice claims would intrude on academic freedom (the right of schools and teachers to instruct in the ways they think best) and First Amendment free speech rights;“Schools facing malpractice claims might have to take resources away from education and use them to fight lawsuits;“The fear of lawsuits might cause schools to abandon their educational mission or interfere with their ability to design effective educational programs; “Effective education is too hard to determine when students all learn differently and there are many different ways to teach. In addition, there are more topics than anyone can teach, and how does one decide which topics are absolutely necessary to teach.”

“If I’m teaching how to land a plane and five students in the class leave that class clueless, because they couldn’t understand what I was talking about and one of them knows exactly how to fly a plane, have I been ineffective as a teacher or are they ineffective as students?” Lee asked. “Who can really tell? And, even if it’s possible to figure that out, are courts really the best party to figure that out—or should we leave that to school boards, or principles, or someone else to determine that they’re not being an effective teacher?”

Per the court’s ruling, with regard to flight schools and claims of educational malpractice, there is an additional level of instructional oversight that would further dissuade the courts from getting involved: the FAA.

According to Stephen “Steve” Dedmon, J.D., aviation law professor and associate chair of the College of Aviation at Embry-Riddle Aeronautical University, acting on claims of educational malpractice, like the one alleged by Grady, would put the courts in a precarious situation. “It would put them in a position to have to micro-manage all aspects of flight…and that is not their purview. They would also have to attempt to discern what a pilot actually learned, to what extent, over what period of time, what factors might have impeded application of that knowledge (fear, anxiety) and they cannot do that.”

FAA-approved Part 141 flight schools are required to have an approved syllabus for instruction that outlines specific ground and flight modules. Additionally, Part 141 schools must monitor student pass/failure rates and the FAA may revoke their certification, Dedmon said. “They are also subject to their instructors being observed in a classroom or flight setting to assure they are teaching the specific module information.”

Flight schools operating under Part 61 are not as closely monitored by the FAA, and do not need to follow the requirements outlined in Part 141. Part 61 schools train students on a one-to-one or customized basis and have a more flexible training schedule. “[Under Part 61] I, as a CFI, can set my own ground or flight instruction as I wish. Or in many cases, ground instruction can be purchased from various commercial providers and is totally acceptable to pass the knowledge written and oral associated with obtaining a pilot certificate,” Dedmon said.

While there are some differences, both Part 61 and Part 141 schools adhere to the same airman certification standards set by the FAA, which are used to assure that the pilot meets the requirements in the Federal Air Regulations (FARs).

The defendant in this lawsuit, Aero-Tech Services, offers both Part 61 and Part 141 training options.

While not required, Dedmon said as an attorney and a flight instructor, he would advocate for greater documentation of training details. “Practically speaking logbook entries by the CFI showing the pilot had been advised of the operation of the CAP system as related to being in the POH [and told to consult it], and an entry showing the instructor demonstrated how to preflight the system would have been valuable evidence of pertinent instruction,” he said. “Granted you cannot document everything [as the court said]…but details count.”

A note entered in Durkin’s logbook dated July 25, 2014, indicated that he “received the required training of section 61.31 (f) in an SR22 and was determined “proficient in the operation and systems of a high performance airplane.” There was no entry specific to CAPS training, so it is unclear if it took place.

While the Superior Court’s ruling may be seen as a win (for now) for flight schools and their employees, Dedmon cautioned that it doesn’t give them “blanket immunity” from claims of educational malpractice, and this was referenced in the lower court’s decision. “For example, if a flight school failed to warn of the deadly flight characteristics of an airplane that had resulted in a disproportionate number of crashes and fatalities,” it might be liable, he said. “Practically speaking, the issue here is what you know or do not know, but this is a reasonable expectation of CFIs and flight schools.”

And, flight schools and other educational institutions may still be subject to claims of fraud (e.g., lying to a student to get them to enter into a contract) and breach of contract, Lee added.

The post Court Ruling Brings Sigh of Relief to Flight Schools, CFIs, but Not Immunity appeared first on FLYING Magazine.