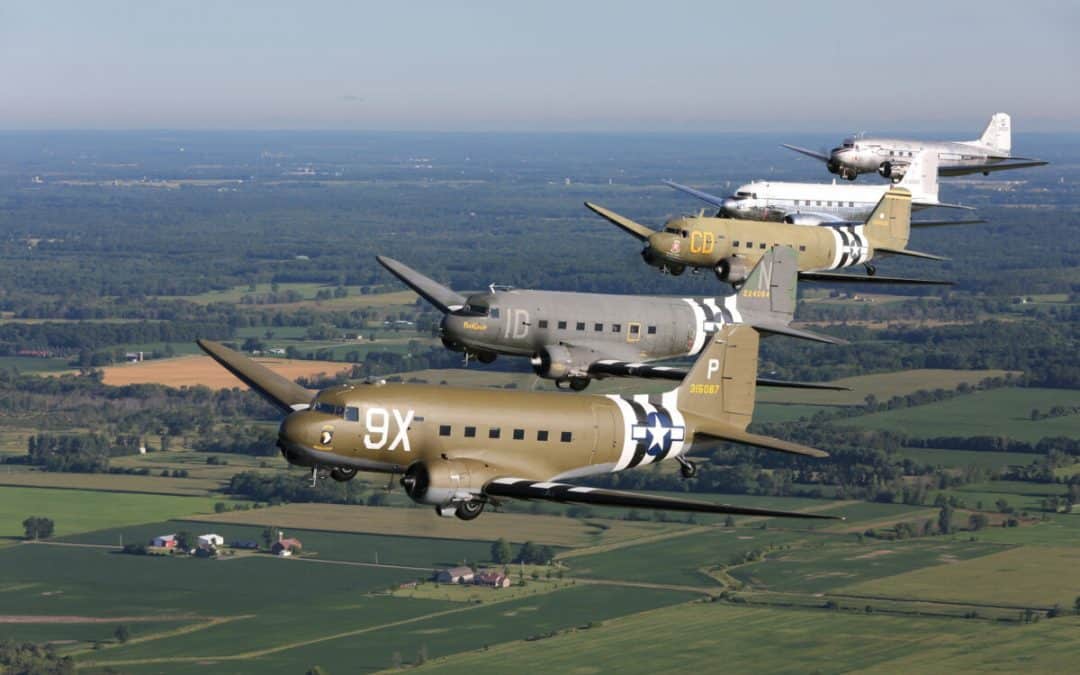 The D-Day Squadron took a fleet of Douglas DC-3s and C-47s across the North Atlantic for the 75th anniversary of the Normandy Invasion—better known as “D-Day”—back in 2019, and they plan to do it again in 2024.

Those plans were unveiled at EAA AirVenture last summer, with the mission to encompass another key memorial event, the 75th anniversary of the Berlin Airlift.

For the joint commemorations, the organization has embraced a theme, “2024 Legacy Tour,” to bring together all elements of the planned activities up to the next crossing and on European shores, from the United Kingdom to France and Germany. The group’s announcement also coincides with the release on DVD and Blu-Ray of the film created to immortalize the 2019 mission, Into Flight Once More, produced by the D-Day Squadron and Sound Off Films.

“In 2019, our focus was to remind people how World War II veterans more than 75 years ago fought for our freedom, liberties and served, where many lost their lives so we may live,” said Eric Zipkin, chief pilot and director of operations for the mission. “In 2024, with so few World War II veterans with us, we will recreate the journey to Europe and fly each commemoration to protect their ‘Legacy,’ to never forget what these veterans meant to each of us, and our world history.”

In fact, most veterans of both the Normandy Invasion and the Berlin Airlift still living are in their late 90s or have crossed the century mark. It is the sworn purpose of the D-Day Squadron and its associated partners to keep their memories from fading.

According to the organization, planning for the mission is well underway. “A volunteer committee of seasoned professionals is being established to help organize and manage logistics in support of another remarkable mission to honor, pay tribute, and commemorate World War II veterans.

“The D-Day Squadron is currently working with corporate and individual partners, donors, and support to bring this mission airborne,” the organization said. Those wishing to participate, if not already, are asked to contact the D-Day Squadron’s executive director, Lyndse Costabile.

A Flight Sim To Train for DC-3s

As part of the preparation that must be made to shepherd a collection of vintage aircraft over a days-long transatlantic mission, the pilots must be ready. To assist them with that cause, Multi Pilot Simulations is offering use of their Douglas DC-3 flight training device for pilots and crews to train to prepare them for all aspects of the mission. The fixed base FTD-2—crafted from an actual DC-3 cockpit and forward section—is fully approved under the European Union Aviation Safety Agency (EASA) for initial and recurrent training on the type. The sim gained approval in early 2018 after many years of development. It’s based at the MPS headquarters outside of Amsterdam in Groenekan, The Netherlands.

Dick Verburg, retired founder of MPS, shared news of this opportunity with FLYING on Friday as well. “We have activated the Normandy airports in our DC-3 simulator. We will invite all DC-3 crews who will participate in the 80-year D-Day event in 2024 to make free use of [the sim] between now and the event date to prepare or just have a nice go at it.

“We make this offer well in advance so that all those involved who happen to come to Europe can route through Amsterdam and use the simulator any time.”