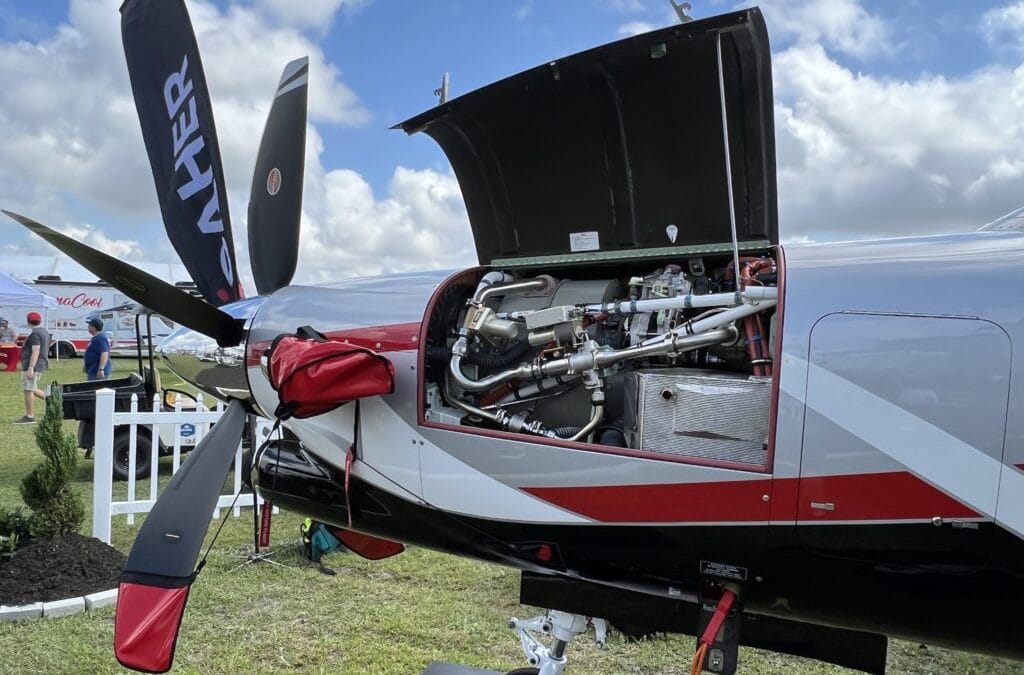 With certification under the European Union Aviation Safety Agency (EASA) in hand, Daher debuted the latest member of its single-engine turboprop family, the TBM 960, at Sun ‘n Fun Aerospace Expo in Lakeland, Florida, on Tuesday.

The newest TBM proposes simplified operations, digital data streams for more thorough analysis—and a level-up in takeoff and climb power of up to 45 shp, according to the company. The increase in performance and capability stems from the new Pratt & Whitney PT6E-66XT turboprop engine, with a thermodynamic power rating of 1,844 hp—a bump up from its predecessor in the 940, the PT6A-66D—but with the same nominal power rating at 850 shp.

Nearing the end of the OEM’s quest to secure FAA certification on its latest TBM model, Daher Aircraft Division senior vice president Nicolas Chabbert spoke of the place that the more-efficient turboprop would take in the company’s progress toward meeting its audience where they want to be.

“We are almost there in the validation process with the FAA; I know that it is making progress as we speak…and in a few hours, we’ll be able to announce [that] at this point it will be fully validated. We are ready to start shipping out of Tarbes.”

The aircraft Daher brought to Sun ‘n Fun was used in part for certification, and Chabbert flew it in on Friday for the event. “All of the systems are perfect and ready” for deliveries to begin as soon as FAA certification is complete.

A Powerful Update Up Front

Nicholas Kanellis echoed Chabbert’s sentiment. “The introduction of the PT6E-66XT engine reaffirms our continued commitment to innovation and our desire to proactively bring solutions to our customers.”

The E-Series powerplant features a dual-channel integrated electronic prop and engine control system—the first into the GA market. With a digitally “enabled” single-lever engine and propeller control, Pratt and Daher both envision simplified powerplant management for the pilot—and a data stream that will allow for deeper analysis.

The PT6E on the 960 drives a new five-blade Hartzell prop with the lightweight Raptor hub.

Updates with the 960 Model

Pilots should see improvement particularly during engine start, with more consistent operations, and a higher level of precision throughout the TBM 960’s range of operating altitudes and regimes. Digital data flows through the data collection and transmission unit (DCTU) to make a full range of flight data accessible via multiple platforms—including the pilot’s mobile devices.

The 960 wears a reimagined paint scheme and “prestige” interior appointments.

“Comfort comes with new seats,” said Chabbert, “and we have been able to increase the level of comfort…for passengers as well as optional pilot seats.” Additional passenger improvements can be found in power sources and touchscreen cabin environmental controls.

Chabbert restated the results for 2021 deliveries—60 total—and previewed that the company has planned 60 deliveries of the TBM models alone for 2022. “In 2021, we almost forgot that everybody had a very bad year, not looking good with COVID,” he said. “We finally had in GA one of the best years.”

Much of that success in the immediate future will hinge upon the supply chain. While Chabbert indicated that pain points existed broadly across suppliers for Daher, availability of the PT6-series engines has been challenging for the GA turboprop market, as several sources at the show have indicated to FLYING. The return to full-scale production in the aviation industry combined with ongoing workforce issues has driven certain restrictions that are not isolated to any specific OEM.

Daher’s new facility in Stuart, Florida—acquired in its purchase of Triumph Group’s aerostructures division—will bring to the company its second-largest manufacturing plant behind the original one at Tarbes, and more than 400 personnel along with it when it comes into the fold.

Also, Chabbert alluded to coming updates to the company’s Kodiak 100 utility turboprop model as well. “Stay tuned with us, because the Kodiak is a fantastic airplane, and as we speak…I’m very proud that the team has already sold the 2022 production.” The Series III is float-ready, and carries a full-bore maintenance program to keep up aircraft utilization.