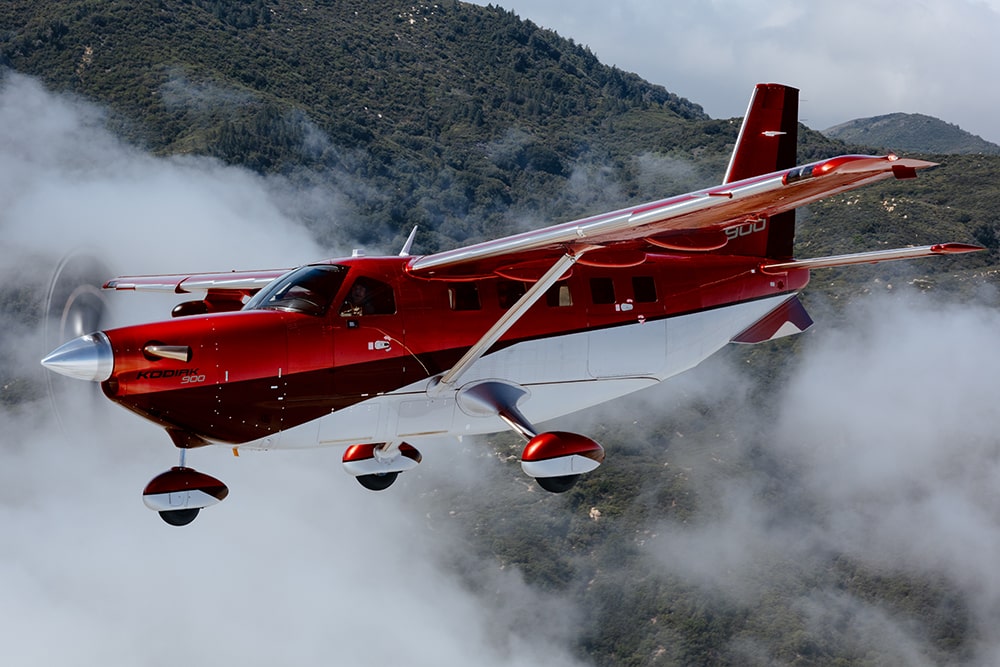 What do you do with a well-targeted utility machine capable of mastering a wide range of on- and off-airport missions? Well, you make it fly faster.

Daher Aircraft revealed the Kodiak 900 pretty-darned-fast utility turboprop from the Kodiak 100 series, and the company announced its FAA certification at EAA AirVenture 2022. With a new PT6-series powerplant from Pratt & Whitney, a streamlined cargo pod, and the Garmin G1000 NXi up front, the Kodiak 900 takes the series forward into a profile that not only can maintain its milestones of range and endurance but also post a maximum cruise speed of 210 ktas.

Daher’s CEO, Didier Kayat, kicked off the press briefing at AirVenture by laying the foundation of Daher’s recent expansion in the U.S., before revealing the new aircraft and handing the microphone to Nicolas Chabbert, CEO of Daher’s Aircraft Division.

“This is the fabulous aircraft that has gone way faster than its sister aircraft, the 100, but also any of the competition that is available out there,” Chabbert said. “It’s mainly done through a combination of things…but let’s start with the propeller.”

The prop in question? A five-blade Hartzell composite propeller whose design is borrowed from the TBM series. And it spins at a lower rpm, “so we can get the noise down,” Chabbert said, “even with the aircraft being a much bigger baby, as you can see.” The prop maintains an all-important ground clearance of 15.6 inches—critical for the Kodiak’s off-airport applications.

The PT6A-140A represents the first new engine for the Kodiak since it was originally delivered with the PT6A-34, and the 900 in the new model number represents the leap in shaft horsepower from the -34’s 750 shp to the -140A’s 900 shp.

The extra 150 nominal horsepower is available throughout the Kodiak 900’s operational range, at temperatures up to 99 degrees Fahrenheit (37 degrees Celsius). This capability directly addresses the airplane’s regular use into hot and high conditions—hot temperatures and high altitude airports and backcountry locations.

Chabbert noted that the new -140A provides a “good 5 percent efficiency” over the previous PT6A in the Kodiak. “Having this kind of power for an aircraft like this—it needs to go into places [where] it’s hot and high. The thing about the -140A is that we can maintain this power at an impressive 37 degrees…so that can give us a lot of flexibility to maintain power even if it’s going to be in the middle of summer, in the Rockies, and you need to get off efficiently.”

With the prop/engine combination, the 900’s TBO is 4,000 flight hours, with an on-condition hot section inspection program.

The streamlined cargo pod in the Kodiak 900 can hold plenty of stuff. [Courtesy: Daher]

The Kodiak 900 is the first Kodiak to feature single-point refueling, and Chabbert said it’s already proven useful. “It’s extremely handy, and on our flight over to Oshkosh, we stopped at one place where it was absolutely essential that we had that single-point of refueling feature on the aircraft.

“We have worked on the details, listening to the customer feedback, and every piece of ergonomics, whether it’s on the flight deck or in the back of the plane has been addressed on this new model,” Chabbert said.

“One thing that we wanted from day one—I suggest that we can’t just look at the future and say that ‘we’ll do something better later.’ We have to, today, make sure that whatever we come out with as a new product we are going to do it in a more efficient way.”

“We basically are doing the same range as Kodiak 100 on the Kodiak 900 [969 nm] with a much faster speed of 210 knots. We’re able to carry more—it [has] an impressive useful load of 3,630 pounds, and I can tell you that, seeing the airplane full of people, full of luggage, and taking the picture of the luggage on the ground, you say, ‘Holy crap! This is it!’”

Chabbert flew with Paul Carelli, director of flight operations and special missions for Daher’s Kodiak division, and they were both impressed by—among other parameters—the short-field takeoff. They went to practice takeoffs and landings at a small grass strip near the Kodiak base at Sandpoint, Idaho, with the runway at 3,000 feet, and a little bit uphill. “I went to say, ‘Can this baby take off with a full load of passengers?’” asked Chabbert, and the answer was, yes it will.

Carelli outlined the flight test program, which started in earnest with the Kodiak 900’s first flight on February 28, 2020, with two test aircraft and one ground article. “This plane did phenomenally,” Carelli said. “We took it to some places, on airport, off airport, all across the U.S. And I can tell you that we flew 163 hours, about 131 landings…[some on] very rough terrain, and we did about 90 sorties. And we had absolutely not a single maintenance gripe on a brand new airplane.”

He also foresees special missions applications for the 900, noting that if dialed back to 85 knots, the aircraft can loiter for up to nine hours on station, and then “sprint to an area of opportunity.”

A look at the cockpit of the Kodiak 900. [Courtesy: Daher]

Chabbert also addressed the future of Daher’s product line, and how it will meet the proposed net-zero carbon emissions plans for the aviation industry by 2050.

“We don’t want to go out with any products that are not going to be an answer now to sustainability,” he said. “Now we cannot do big jumps, which is impossible. We have to count on technology—that’s why this program with [Daher’s] Eco-Pulse is very important to us.

“Today, I’m happy to report that these new aircraft, that are a much bigger size, carrying more, getting faster—it’s going to be using exactly the same amount of fuel over a Kodiak 100. So, we are not consuming more—we are using the exact same amount of fuel.”

Such efficiency—and the use of sustainable aviation fuel (SAF) across its fleet—means that Daher is making some of the incremental steps today that are critical to maintaining its place in the tightly contested single-engine turboprop market.