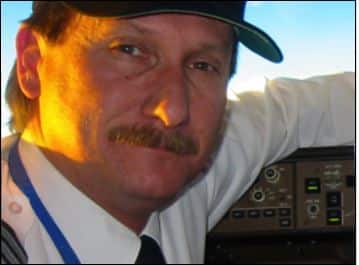 Watching a visceral image of an airplane crash is always disturbing, but realizing that a former colleague was part of the wreckage is exceptionally difficult to process.

The midair collision of a Bell P-63 Kingcobra and the Boeing B-17 Texas Raiders at the Dallas Executive Airport (KRBD), just south of Dallas Love Field, became this past weekend’s news media spectacle. Tragically, six people dedicated to the mission of the Commemorative Air Force (CAF) lost their lives on board the two aircraft.

Was the cause mechanical? Incapacitation? Momentary loss of situational awareness? Rather than join the accident speculation theorists, it seems more appropriate to apply the CAF mantra of, “educate, inspire, and honor,” to one of the victims who I admired and respected: Capt. Terry Barker. Assuming the other crew members were a reflection of Terry’s character, this writing is their tribute as well. Having been an Army veteran, and passionate about aviation, Terry was a natural fit for the CAF.

Only 22 seniority numbers behind me, Terry and I became new-hires at American Airlines in September 1984. In less than six years, we were both captains. Terry became a North American F100 check airman, an Airbus A300 check airman, a Boeing 767 check airman, and eventually a Boeing 777 check airman. He was a fervent supporter of our pilot union, assisting on the check airman committee as chairman and also on the training committee, working with base chief pilots to address training issues.

As an example of Terry’s leadership, he diverted a 777 to Shemya, Alaska, in the Aleutian Island chain as a result of a cargo fire indication. None of the almost 200 passengers bound for Tokyo from Dallas were injured. Despite the fact that Shemya is a sparsely manned U.S. Air Force base in the middle of nowhere, Terry and his crew worked on the logistics of routing the airplane back eastbound to Anchorage, leaving bags behind because of the inoperative cargo fire suppression system. Arrangements were made for another airplane to complete the original mission to Tokyo.

One of my mutual check airman friends recalls that shortly after Terry had been trained as part of the initial cadre of 777 check airmen, they were given the opportunity to fly a shiny, new airplane from American Airlines’ maintenance base in Dallas. They were asked to have the airplane back in four hours and how much gas did they need? Twenty-two touch-and-gos were conducted. The friend never forgot how relaxed Terry had made him feel throughout the entire event.

Passionate about general aviation, Terry built a Pitts Special in his hangar. On a flight test day for the airplane, claiming that he was only going to perform some basic, non-aerobatic maneuvers, he disappeared for an hour and half, leaving his pilot father-in-law, (who had assisted in building the Pitts), and check airman friend to wonder what went wrong. Apparently, he enjoyed his test flight enough to land at a nearby airport and have lunch.

When his veteran father-in-law purchased an L-19 Bird Dog, Terry participated in the restoration project. Outside of aviation, he supported his community through contributions on the zoning commission and also as a town councilman.

Upon meeting Terry, you instantly felt comfortable. Everyone that I have contacted regarding this loss, had nothing but glowing praise to offer. And despite his relaxed nature, Terry was not a short-cut guy when it came to operating an airplane.

Through my experience participating in a much smaller organization—the Flagship Detroit Foundation that is dedicated to the preservation of a vintage Douglas DC-3—I have no doubt that the CAF conducts formal pilot training with all of its airplanes. A high percentage of the organization’s pilots have military backgrounds or airline backgrounds, or both, so regimented procedures are accepted norms, especially with flying museums.

As with the Flagship Detroit, my concern was never with the safety of our procedures, but rather that it takes a village to keep these incredible pieces of history airborne. And the villagers all want an opportunity to participate in the fun part, which is flying the airplane. With qualified pilots taking a turn at the control wheel, airline-type repetition is not as frequent. Proficiency can suffer, notwithstanding the fact that flying an expensive vintage airplane is not an everyday affair even during show season.

That being said, transforming the CAF airplanes into static displays does not have quite the same impact as witnessing these magnificent machines fly. It is important for us to be reminded of the engineering brilliance and the fortitude of the men and women that supported these machines during a crucial period in our history.

Yes, it’s a risk to operate vintage airplanes. Hopefully, when the National Transportation Safety Board determines a probable cause, the discovery can help mitigate that risk further. We can’t let this terrible event restrict the future of flying these airplanes. If we do, then the dedication and passion of the six lives lost will have been marginalized. As a matter of fact, if you aren’t already a member of the CAF, join today. There is no better time.

As for my colleague, pardon the cliché, but I hope that family and friends find comfort that we lost him doing something he loved. Thanks for educating, inspiring, and honoring. You have flown West much too soon. You will be missed, Capt. Barker.