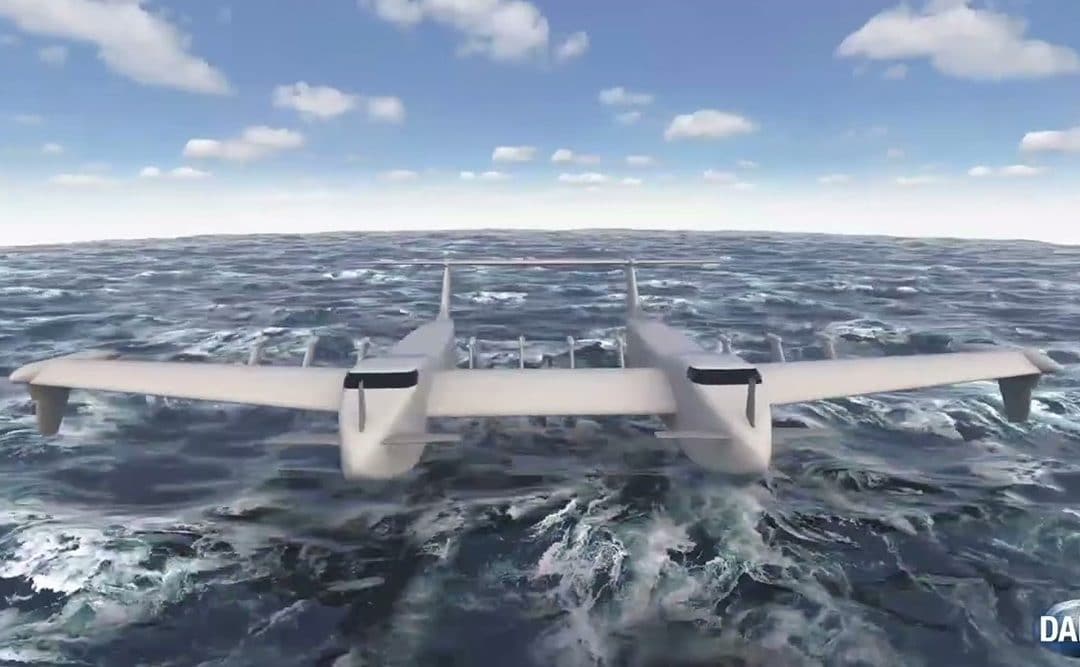 Future military heavy-lift cargo pilots might need to bring their sea legs. That’s because a project by the Pentagon’s Defense Advanced Research Projects Agency (DARPA) aims to develop a new cargo seaplane with a payload capacity similar to a C-17.

DARPA’s Liberty Lifter concept is a long-range X-plane capable of seaborne strategic and tactical lift operations with the ability to take off in turbulent ocean water. It will be affordable, made with low-cost, lightweight materials. If all goes as planned, the Liberty Lifter will perform its first flight in about five years.

While pushing airborne troops and gear onto foreign shores is hardly a novel concept, DARPA’s Liberty Lifter program aims to use new technology to expedite long-range logistics. The idea has been in the works internally at the agency for the past five years, according to Dr. Alexander Walan, a program manager in DARPA’s Tactical Technology Office.

“We envision this aircraft being able to go to a port and unload with cranes, but also be able to get up very close to beaches.”

It began with a question, Walan told FLYING. “Could we build a 100-knot ship to move things quicker across the Pacific? And the answer came back that, yes, you could probably build a ship that went 100 knots, but for a bunch of technical reasons, it’d be very limited in the sea state, and the weather it could operate in.”

The idea of flying at low altitude, particularly in times of heightened threats, is not a new one.

Integral to its early conceptual design is the aircraft’s 10 engines located on the trailing edge of the wings. The design is deliberate, and meant to test a relatively new aerospace technology: distributed propulsion. The engines pull air over the wing, providing thrust that aids lift and reduces rotation speed and takeoff distance.

Locating the engines on the trailing edge also keeps them out of the sea and salt spray, Walan said.

Conceptual art of the Liberty Lifter aircraft looks similar to the twin-fuselage Stratolaunch’s Roc, the world’s largest airplane by wingspan.

“The art we’ve released is from our conceptual design activities,” Walan said. “As we go through our source selection this summer, we will pick contractors to execute the program,” and the design could change, he added.

“There’s a reason we settled on it in our early stage,” he explained.”The two hulls act a lot like a catamaran in sailing,” which provides stability with side waves and side motions. The twin hulls also help solve the common challenge found in a lot of air lifters of running out of floor space before running out of weight.

Conceptual art of the Liberty Lifter aircraft like this looks similar to the twin-fuselage Stratolaunch’s Roc. [Courtesy DARPA]

The Liberty Lifter could also save precious space at airports. Military airlift operations are often limited by ramp space and potential threats on the ground.

“One of the things we wanted to do is, if we’re adding a new capability, we want to be able to basically not try to pick up additional ramp space that’s already limited,” Walan said. “We envision this aircraft being able to go to a port and unload with cranes, but also be able to get up very close to beaches,” he said.

“What can we do to add capability without adding to the traffic jam?”

Much like current tactical and strategic airlifters, such as Lockheed Martin’s C-130 Hercules, the McDonnell Douglas/Boeing C-17, and Lockheed’s C-5 Galaxies, the Liberty Lifter could transport cargo and troops as well as combat vehicles.

“One of the things we want to do is actually deliver combat vehicles at the point of need,” Walan said. “Those could be amphibious vehicles, those could be small unmanned surface vessels, unmanned underwater vessels, as well as logistics, cargo, bulk cargo, those kinds of things.”

The new aircraft could also have commercial applications.

“At the end of the day, when we fly the vehicle, we want to demonstrate this operational capability of bringing heavy loads in long range, right to the point of need,” Walan said. “But we’re also looking at incorporating some of these new technologies like distributed propulsion, that hasn’t been proven at large scale. That’s a risk DARPA is willing to take.”

DARPA also wants the price of the Liberty Lifter to come in at half to a third of the cost of a similarly sized aircraft. To meet the goal, the agency will make conscious design choices that use cheaper materials and require less labor to manufacture, he said.

“That’s riskier, because you’re trying to do things new and differently,” Walan said. “We’re trying to use the best of the high-speed maritime technology as well as some low-cost aircraft manufacturing approaches.”

DARPA is currently evaluating proposals, and anticipates having a contract in place in the fall, around October, Walan said.

“We will end the first year kind of refining the preliminary design,” before going into a more extensive, detailed design, he said. “We hope to fly within four and a half to five years, all told. So it’ll be a relatively fast-paced program.”