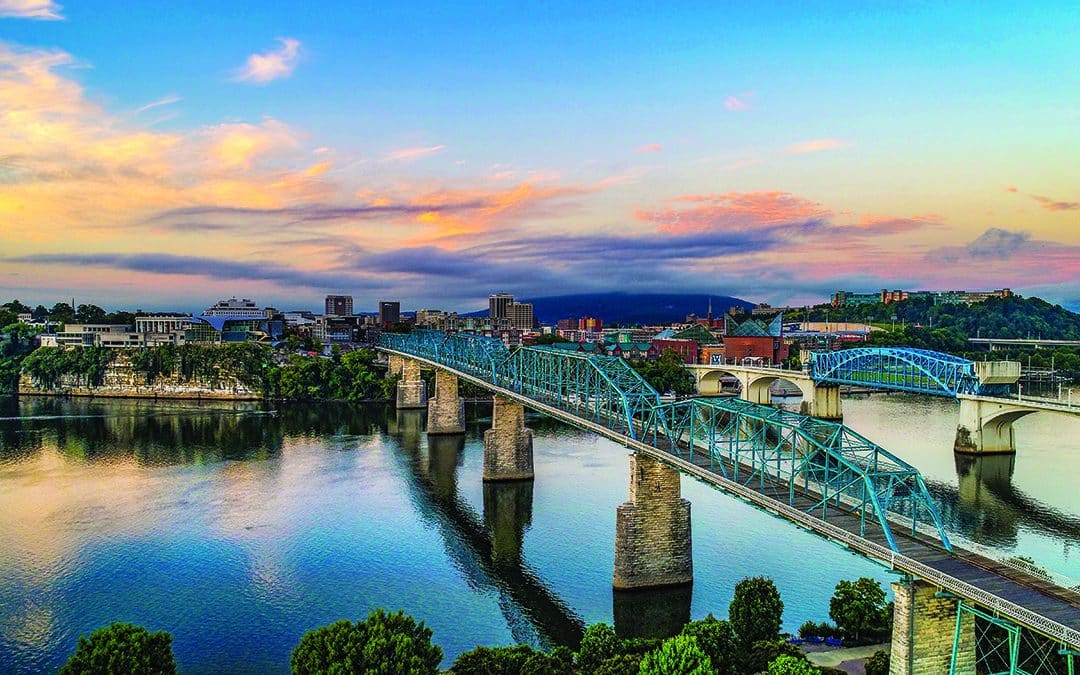 Chattanooga, Tennessee, has changed a lot since the song “Chattanooga Choo Choo,” recorded by the Glenn Miller Band in 1941, put it on the world map. Known then as a railway and steamboat shipping hub—its Terminal Station was the first railway station in the South—today, Chattanooga is an outdoor tourism destination and a thriving metropolis.

The city’s redeveloped riverfront and downtown beckon you to travel its scenic pathways and bridges along the Tennessee River—one reason it was named “Best Town Ever” by Outside in 2015. With six neighborhoods, visitors enjoy unique dining, shopping, and attractions, which include the Chattanooga Lookouts minor league baseball team and the Tennessee Aquarium.

The Tennessee River Blueway, a 45-mile stretch of the river designated for canoes, kayaks, and other human-powered watercraft, runs through Chattanooga. Just south of the city, the river meanders through the Tennessee River Gorge. Known as the Grand Canyon of Tennessee, much of the river gorge’s 27,000 acres is protected. Paddlers, mountain bikers, hikers, and rock climbers enjoy its rugged scenery, wildlife viewing opportunities, and primitive camping.

The river gorge is also a favorite low and slow VFR route and a runway for amphibious aircraft. According to the Seaplane Pilots Association, almost all Tennessee rivers and lakes are open for seaplane use outside of municipal boundaries. With Signal Mountain to the north, Lookout Mountain to the south, and Missionary Ridge to the east, the city of Chattanooga is mostly sheltered from extreme weather events and enjoys a moderate climate with average temperatures ranging from 39 degrees Fahrenheit in the winter to 80 degrees in the summer.

On clear days, on Lookout Mountain—the site of historic Civil War battles—you can see seven different states: Georgia, Tennessee, Alabama, Kentucky, North Carolina, South Carolina, and Virginia. An incline railway scales the side of the mountain offering views of the city and points north. A National Historic site and an Historic Mechanical Engineering Landmark, the funicular travels at a 72.7 percent grade at its steepest point and has operated since 1895.

Called “one of the South’s best cities for outdoorsy types” by Lonely Planet, Chattanooga is a gateway to whitewater rafting, hang-gliding, world-class rock climbing, hiking, fishing, boating, and more.

Just a 35-minute drive from downtown, anglers can find some of the biggest largemouth and other bass varieties on Chickamauga Lake, a 60-mile-long reservoir that measures up to 72 feet deep. Rated the second-best bass fishing lake in the U.S. in 2018 by Bassmaster magazine, Lake Chick, as the locals refer to it, annually hosts several national-level fishing tournaments. Boating, swimming, water skiing, and paddling on the lake are also popular pastimes.

Those looking for thrills of a different kind on the water don’t have far to go either. About an hour’s drive from Chattanooga—and just 20 minutes from Cleveland Regional Jetport (KRZR)—is some of the state’s best whitewater rafting, on the Ocoee River. A section of the river was engineered for the 1996 Summer Olympics to create a world-class slalom course with Class III and Class IV rapids. A number of outfitters offer river rafting trips of the Upper and Middle Ocoee that range from a few hours to full-day excursions. They provide transportation, an experienced guide, and basic training.

River rafting is a popular activity in and around the Chattanooga area. [Photo: Adobe Stock]

If art is your thing, check out the Hunter Museum of American Art, which showcases paintings, sculpture, contemporary studio glass, and crafts in buildings that range from an Edwardian-style mansion to 21st-century architecture. Nearby, the River Gallery Sculpture Garden is a 2-acre outdoor exhibit space that includes a static collection, as well as a meditation area, and overlooks the Tennessee River. The largest sculpture garden in the Southeast, Sculpture Fields at Montague Park, is located on Chattanooga’s southside. The 33-acre facility exhibits artwork from all over the world.

The city is also known for its music and nightlife, offering a variety of craft breweries, bars, and clubs with names like The Flying Squirrel, Whiskey Thief, and Sing It or Wing it.

Have you always wanted to try rock climbing but didn’t know where to start? Check out one of Chattanooga’s indoor rock-climbing facilities. High Point Climbing and Fitness offers two locations, belaying and bouldering courses, and more than 25,000 square feet of indoor and outdoor climbing. Looking for an activity for the kids? There are plenty to choose from, including the Tennessee Aquarium—which has more than just fish. Amphibians, otters, birds, butterflies, turtles, monkeys, reptiles, and even penguins call the aquarium home. And, its IMAX theater offers an immersive 4K-laser-projection film experience.

When you’re ready to slow down, visit Chattanooga Whiskey’s Experimental Distillery, which offers tours and tastings of one-of-a-kind craft spirits. Representing a revival of liquor distilling for the region, Chattanooga Whiskey opened in 2011—and was the first distillery to operate in the city in over a century. Now, with two locations, the business celebrates the rich history of liquor distilling in Chattanooga, which in the 1860s to 1900s had over 30 distilleries and up to 98 liquor dealers.

The city is also known for its music and nightlife, offering a variety of craft breweries, bars, and clubs with names like The Flying Squirrel, Whiskey Thief, and Sing It or Wing It.

An attraction that brings the city’s historic significance as a railway center full circle is the Chattanooga Choo Choo Hotel. Housed in the restored Terminal Station, which was the first railway station to open in the South in 1909, the hotel offers unique lodging options, a comedy club, dining, and retail, and is listed in the National Register of Historic Places.

Given the city’s strategic location in the Southeast and its rail and waterway systems, some of the most significant Civil War battles took place there, principally on Lookout Mountain and Missionary Ridge. The Chickamauga and Chattanooga National Military Park—the largest and oldest Civil War park—tells the stories of the 1863 battles fought in and around Chattanooga and of the soldiers who fought and died there.