Discovering Aviation’s ‘Lightning in a Bottle’ 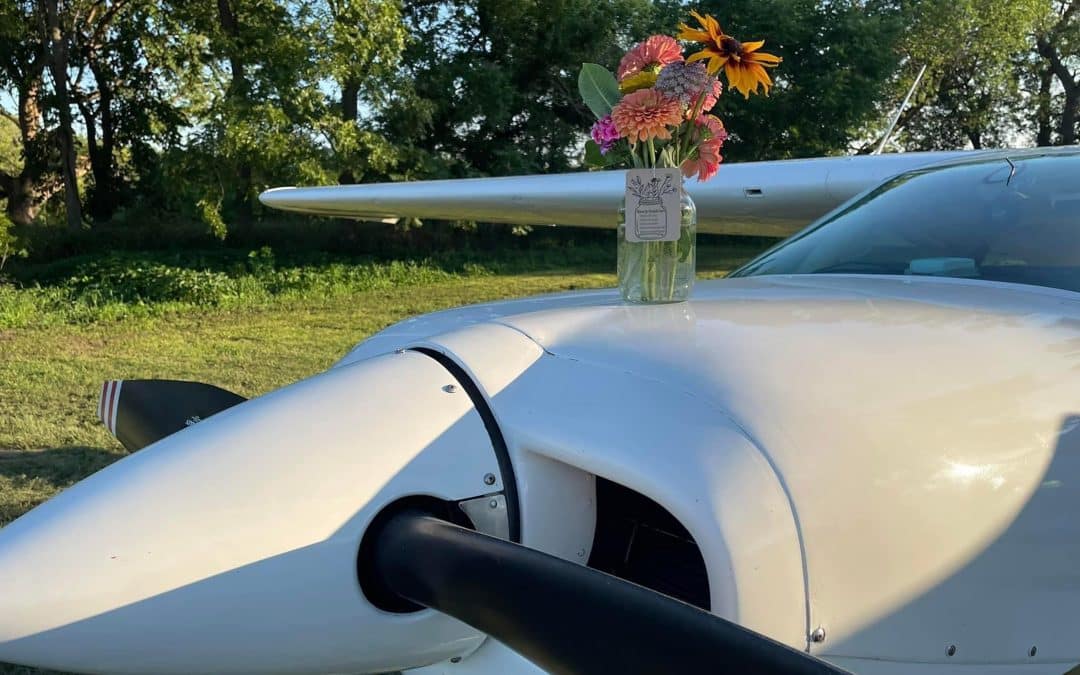 A 2,200-by-90-foot grass airstrip is the newest addition to Chad and Christy Heckathorn’s acreage in Elk Point, South Dakota. A private pilot for several years, Chad is confident that the newly installed runway will quickly become an integral part of the husband-and-wife duo’s various business ventures.

“I think that this is where we have something special. Pilots would love the experience of flying somewhere remote and dropping in on a grass strip, but they may struggle to get their spouse, kids, or whoever to come along. But with a runway, a campground, and a flower farm all together, it seems like we have something for everyone. Long story short, I think we’ve potentially discovered aviation’s lightning in a bottle.”

Regardless of how excited he is to share his new grass strip with fellow aviators, Chad is quick to note that Christy’s business, Fleurish Flower Farm, is the centerpiece of the property. “My wife has done wedding flowers for decades and now that our kids are getting older, we are moving into that stage of life where you have more ability to reach out and stretch. So, she said, ‘What if I were to take a class on growing flowers?’”

Christy and Chad Heckathorn are living their dreams on 80 acres in South Dakota. [Photo: Courtesy of Chad and Christy Heckathorn]

Since asking that question only a few years ago, the idea has grown to encompass nearly 80 acres of real estate. In this section of the Heckathorns’ land, which is also where the runway is located, Chad notes that, “I’d guess, just offhand, that she has thirty, or better, varieties of flowers out there; everything from bells of Ireland to zinnias. The picking season goes all the way up to the first frost.”

Neither the campsite, the “fleurishing” flower farm, or pilot-friendly airstrip would be possible without the Heckathorns’ acreage.

“What we did is, I purchased the ground originally because I run a corn and soybean seed business. We farm for a living, and I provide seed to folks like myself, so we run those two businesses within agriculture. I bought the land that all of this is on because it’s right on a highway and has easy access, all of the things that you would have for [a] retail business like mine,” Chad said.

The combination of colorful flowers and a highway-adjacent location led to an unexpected surprise for the couple. The flying farmer noted that this led to passers-by stopping in, wanting to enjoy the flower fields—which was not the business’s initial intent. Soon, the couple began welcoming people to pick their own flowers, while concurrently offering the ability for guests to enjoy music, food, and drinks.

After all of the planning and hard work it took to get Christy’s you-pick farm concept off the ground, Chad was excited to get his own project in the air.

“I think every farmer that has farm ground wishes that they had a runway of their own. I am that guy too, and got into flying about four years ago,” Chad explained. “It was kind of a crazy ride getting into it and it wasn’t something that I planned on getting into. It kind of found me, which is a whole other story.”

Flying quickly took root in Chad’s life and a few years later, he “selflessly” incorporated a purposely designed runway into the couple’s property.

In a post on Facebook explaining the new fly-in flower farm concept, Chad requested something from his fellow airmen. “On a personal note, I would love it if a whole bunch of you would come check out my wife’s flowers. When I built the strip, I said it was so pilots [could] come to visit her farm. She rolled her eyes as if it was actually just for me and my friends to play on…can you imagine!”

While the runway has only been open for a short period of time, Chad has been pleased with the reception he has received from other pilots about the new airstrip.

“I posted in the Grass Airstrip Owners and Pilots Facebook group for all you guys to help me with things that might catch me off guard (i.e., legal aspects, runway condition, etc.). My secondary rollout was to a private Nebraska Facebook group, the Nebraska Pilots. So, I did a limited rollout just saying we are going to have this event and I would love it if you guys would be my test pilots, if you will. Come in and try everything that we are doing. Use the runway, tell me what works. Was it a big problem that the runway wasn’t listed on a sectional, or was that not a challenge?”

Chad continued, noting that the consensus from the limited rollout and the first few aerially arriving visitors was positive. The praise he received centered on the runway’s condition, but also on the uniqueness of him being a flying farmer and the flower field concept.

Chad explained why he thinks HeckSeeds Airfield (a formal name has yet to be announced) is one-of-a-kind. “The only similar thing that I can think of is in north central North Dakota—there is the International Peace Garden between Canada and the United States. There is a runway (identifier of S28 on sectionals) that you can fly into up near there and visit the federally funded, from both sides, flower garden. But that would be more like you would walk through it and it would be peaceful and tranquil, but this would be much more interactive where you are actively picking flowers and taking them home. I think that we might be the only ones doing that with an airstrip next to it. Especially when there is music, food, and all of that kind of stuff.”

Owning his own airfield, where he has been able to bring people together for a unique combination of his and his wife’s interests, clearly brings Chad joy. “I’ve always said that if you go fishing by yourself and catch the biggest fish in your life, did it really happen? You know? Having people experience things with you is kind of the magic of life,” he said.

The post Discovering Aviation’s ‘Lightning in a Bottle’ appeared first on FLYING Magazine.