Drones Give Lift to Wildfire Reforestation 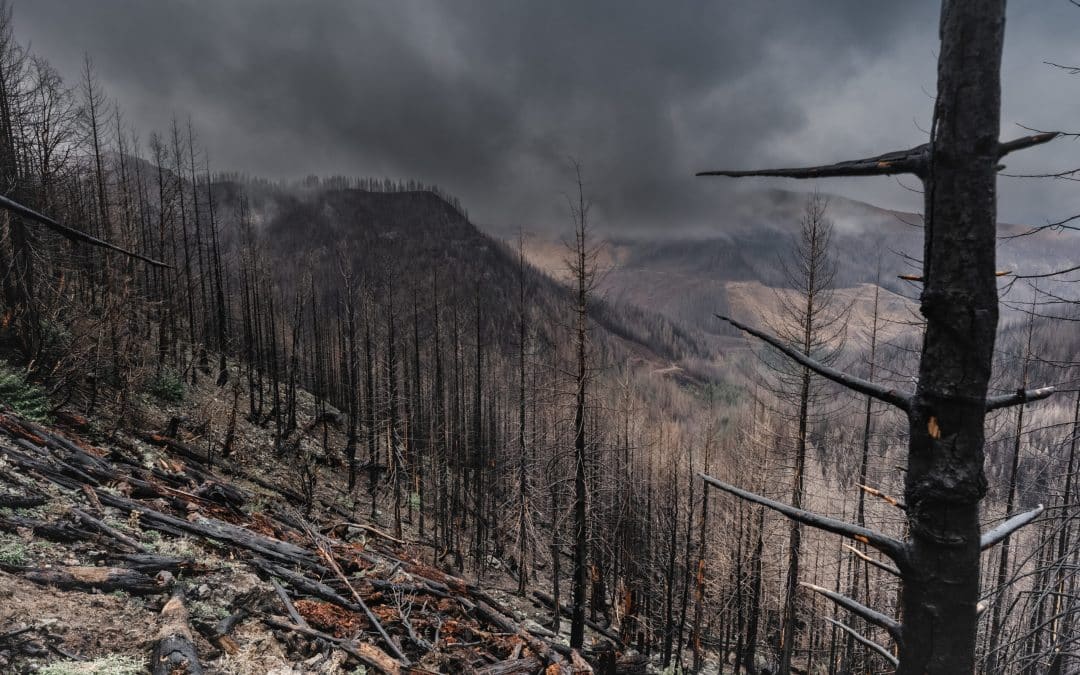 These were the words of the ranger as he led a group of reporters up a hillside that a few months before had been ravaged by wildland fire outside of Medford, Oregon. The dirt gave way beneath our boots like sand. Each step tore up the soil, and soon there was a human-made furrow—normally this hill was covered with a layer of prairie grass.

At the crest of the hill, we saw a helicopter with a large bucket underneath it scattering grass seed in the valley 50 yards away. It was loud, making you want to put your fingers in your ears. In a few minutes, it would be approaching the hillside we stood on. The rotorwash stirred up the soil as well as the seeds it dropped, making me wonder how effective this technique was for restoring the area.

Oh, how things have changed. Today, unmanned aerial vehicles (UAVs) are used to replant wildlands that have been scorched by fire.

Reseed to Protect the Soil

After a wildland fire, the ground can become unstable, as the trees and brush that held the soil in place are gone, burned away. This leaves the soil prone to erosion, and when the land lies on a steep slope, one hard rain turns the slope into a mudslide. This is why forest managers try to replant these areas as soon as possible—but getting there can be a challenge. Sometimes accessing the area through motorized ground vehicles or even on foot while carrying sacks of seedlings or grass seed can damage the fragile terrain. Going in by helicopter or airplane can be impractical, prohibitively expensive, or dangerous—but a UAV or drone can do the job with minimal environmental impact.

The first company to gain approval from the FAA to do this task was Seattle-based DroneSeed.

DroneSeed is the first company to gain approval from the FAA to operate heavy-lift swarms of drones for reforestation, according to the company. [Courtesy: DroneSeed]

Bring on the Swarm

DroneSeed was established in 2016. As the name implies, the company uses drones for re-seeding missions. They accomplish this with multiple large drones (known as a swarm) to reach areas that are not easily accessible on foot or by motorized conveyance. It’s a niche market, notes Cassie Megis, DroneSeed senior director of client solutions.

“DroneSeed is the first and—as far as we are aware—only [drone operator] approved by the FAA to operate heavy-lift swarms in all states west of Colorado,” she said. “These are not off-the-shelf drones, as they are 8 feet in diameter and carry a 57-pound payload.”

This is possible, according to Megis, because DroneSeed has a Certificate of Waiver of Authorization and exemptions from the FAA that allows them to operate swarms of aircraft at a single time from a single point of control, and to conduct extended visual line of sight operations.

“Drones can navigate steep and unstable terrain without disturbing the ground, which does have the potential to reduce the environmental footprint of reforestation compared to traditional hand-planting methods when sensitive or unstable post-fire conditions are present,”  Megis added.

READ MORE: The Real-Life Evolution of the Drone

In a previous interview with FLYING, DroneSeed CEO Grant Canary noted, “Reforestation can be a time-consuming and difficult process when done by hand over rough terrain. Our company’s drones navigate and map difficult terrain, selecting specific spots using LiDAR [light detection and ranging] technology that are the most promising for trees to grow roots. We use custom ecosystem-specific seed vessels to maximize our establishment and survival rates. Combining cutting-edge drone seeding technology with tried and true seedling inter-planting in a second stage combines the advantages of each and is the best strategy towards ensuring the regrowth and long-term health of our forests.”

What Can Be Dropped

Drone technology can be used to drop seed for grasses, flowering plants, shrubs, and trees.

“For conifer seed, DroneSeed has developed a specialized ‘seed vessel’ filled with not just seeds targeted for that ecosystem, but also nutrients and other supports to help more of them grow in harsh post-fire environments,” Megis said. “Our proprietary seed vessels–called ‘pucks,’ because they are shaped like hockey pucks, are a mix of nutrients, moisture-retaining substances, and pest repellents to give seeds the best possible chance of taking root. Our method helps avoid shock to the seedlings, predation, and keeps them from drying out.”

How a Mission Is Accomplished

DroneSeed works with the land owners to obtain whatever permission or waivers are needed to fly in that particular airspace. Often they are working with tribal nations, and state and federal governments in addition to private landowners. The landowners work with DroneSeed’s forestry experts who determine the mix of seeds that will be dropped in the affected area.

Before the reseeding begins, the area is surveyed with LiDAR, which is a detection system that works on the principle of radar, but uses light from a laser to find the best places to drop the seeds. This image is used to build a three-dimensional terrain map of the area.

“Down to the inch,” Megis said. “DroneSeed processes the information and selects specific spots promising for planting after manually removing all areas not suitable to drop seed vessels—like gravel roads, blackberry patches, and rocks. The drone swarms carrying seed vessels (known as pucks) are pre-programmed to avoid these areas, and can drop these pucks in a precise manner.”

According to Megis, a typical flight operations crew consists of a pilot in command (PIC), an operator, a visual observer, and at least one other support team member.

“We operate our UAVs in “swarms” of two to five, and our team works like a NASCAR pit crew to quickly swap out batteries and reload the payload with seed vessels to keep the aircraft in the air to increase operational efficiency,” she said.

DroneSeed deploys multiple large drones (known as a swarm) to reach areas that are not easily accessible on foot or by motorized conveyance. [Courtesy: DroneSeed]

Before the implementation of UAVs, reforestation was done by hand planting, which, according to Megis, can cost thousands of dollars an acre.

“Helicopter and plane-based aerial seeding can be a cheaper, but dangerous and imprecise, solution to kickstart forest regeneration,” Megis said. “While many factors go into the cost of a seeding project, our goal is for aerial seeding by UAV to be a middle ground to these more traditional offerings to allow for both scalability and precision.”

The company notes that “the reforestation space has been traditionally woefully undercapitalized. DroneSeed is looking to help finance reforestation through the sale of carbon offsets. Landowners enrolled in an offset project receive full payment of their share of the proceeds from offset sales in as little as one year after DroneSeed’s replanting operations are completed.

READ MORE: Drones Take Their Place on the Cutting Edge of Wildfire Fighting

DroneSeed has worked in California, Oregon, Washington, and British Columbia, Canada, with pilot projects outside of North America, such as New Zealand.

The company notes that aerial seeding, such as what is done by DroneSeed, is “just one tool in the toolbox” and will not take the place of seedlings or traditional hand-planting methods. “For many of our projects, we employ a two-step process of an initial rapid response of seed vessels followed by interplanting with nursery seeding to ensure reforestation objectives are met.”

This is not a case of “drop the seeds and leave,” says Megis. “DroneSeed is revolutionizing post-wildfire reforestation through the use of heavy-lift UAVs to quickly deploy seed vessels after a wildfire.”

DroneSeed’s operations fall under Part 137, agricultural operations, and as such, the pilots are required to have a second-class medical certificate in addition to a remote pilot certificate.

According to a company spokesperson, “Flights are performed under a Part 137 operating certificate in conjunction with exemptions approved via the Section 333 exemption process. We file NOTAMs [Notice to Air Missions] for our reseeding operations, and we require waivers and certificates of authorization for our operations. DroneSeed also submits to inspections from the FAA.”

The post Drones Give Lift to Wildfire Reforestation appeared first on FLYING Magazine.