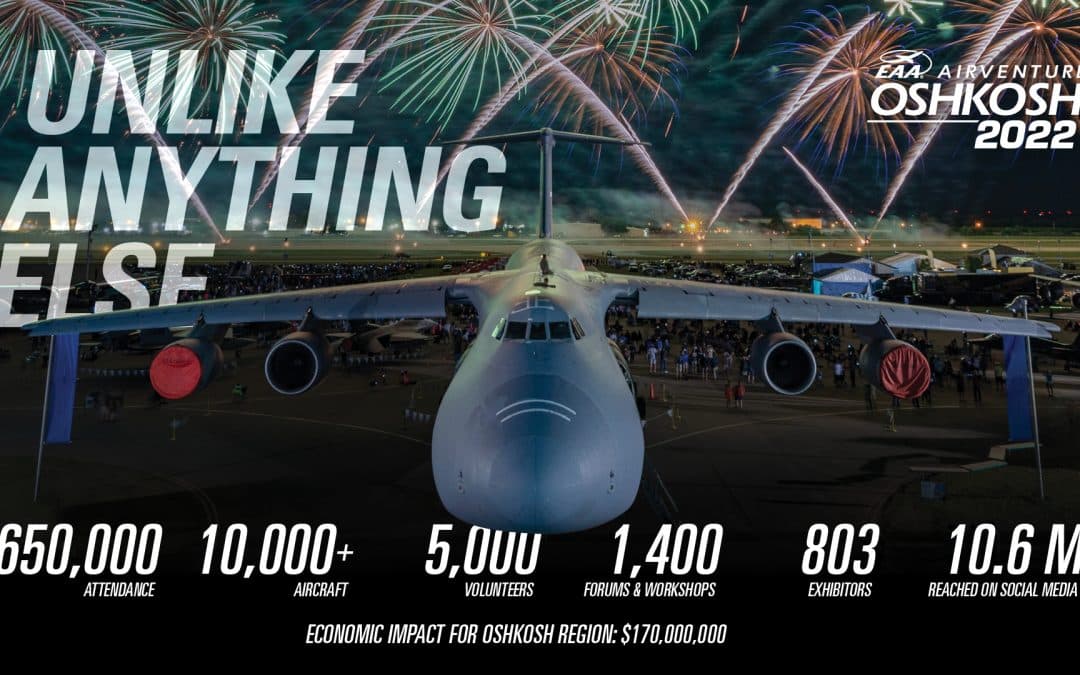 The Experimental Aircraft Association (EAA) has released its numbers for the 2022 AirVenture airshow, and by many metrics, the show was a huge success.

More than 10,000 aircraft arrived at Wittman Regional Airport (KOSH) in Oshkosh and other airports in east central Wisconsin. Here are some of them. Filmed by Michael Wildes.

Here’s What You Need To Know:

Attendance: According to the EAA, 650,000 attendees flocked to Oshkosh for this year’s show. That’s 42,000 more than the 608,000 who attended in 2021. It’s even better than the pre-pandemic record set in 2019 when 642,000 avgeeks showed up. There were also more than 12,000 campers at EAA AirVenture this year. A big boost came from the resurgence of international travel that welcomed people from all over the world—92 countries to be exact. What’s more, one couple got married at the show.

Aircraft weren’t the only thing in the air this #OSH22, there was also love! One couple got married and a photo with an F-35! The other got engaged on top of the B-25 Panchito! pic.twitter.com/UjED5OdN5n

Aircraft: Wittman Regional Airport (KOSH) was indeed one of the “busiest control towers” in Wisconsin as more than 10,000 aircraft landed at KOSH and others flew into some nearby fields, the EAA reported. Takeoffs and landings averaged more than 120 per day during the week-long festivities. Of the 3,226 show airplanes that arrived, 1,375 were vintage aircraft, 1,156 were homebuilt, 369 were warbirds, 137 were ultralights, 87 were seaplanes, 77 were aerobatic aircraft, and 25 were rotorcraft.

Volunteers: Every year, Wisconsin locals and other well-meaning aviation enthusiasts play a significant role in ensuring the day-to-day AirVenture activities go smoothly. This year was no different as EAA counted more than 5,000 volunteers.

Forums, Workshops, and Exhibitors: It wasn’t only about aircraft at the world’s largest airshow. Guests also had the opportunity to attend some of the 1,400 forums and workshops that were held and to interact with 803 exhibitors who hosted booths across the show grounds and halls.

The economic impact: An important number for the businesses and residents of Oshkosh, Wisconsin, and the surrounding region—the EAA estimates that its 2022 AirVenture brought $170 million of economic value to the Oshkosh region as attendees purchased goods and services across an area that includes the counties of Fond du Lac, Calumet, Winnebago, Outagamie, Brown, and adjacent areas.