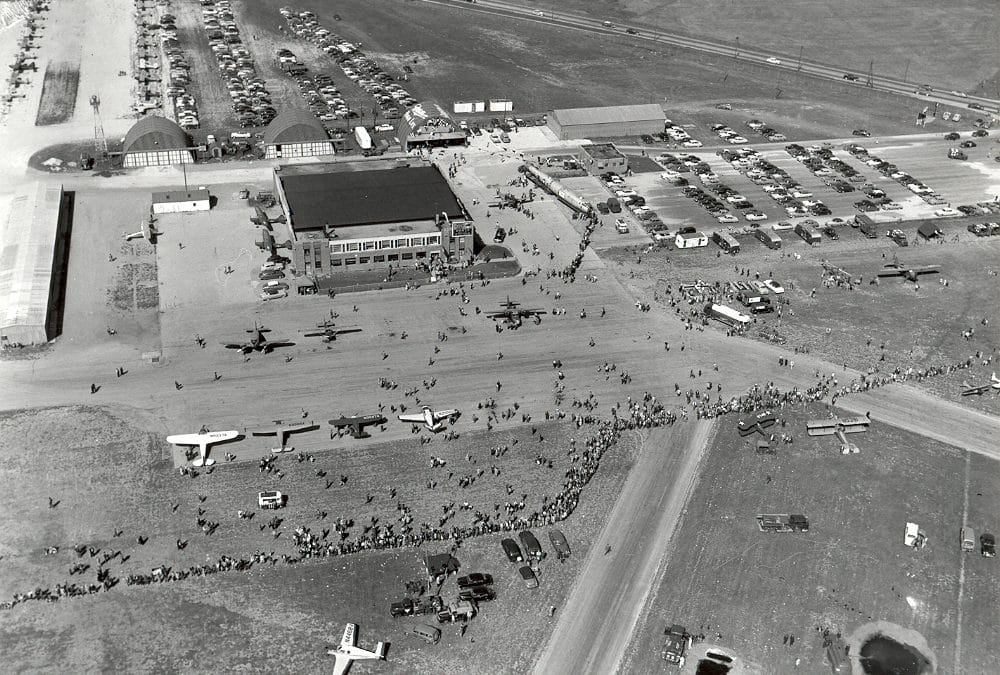 It was a big year for aviation in 1953. Among the milestone events, the Thunderbirds, the U.S. Air Force aerial demonstration team, was activated. The USAF conducted the world’s first jet-to-jet aerial refueling when a Boeing KB-47 Stratojet tanker refueled a B-47 Stratojet, and most important of all—the Experimental Aircraft Association (EAA) was created.

EAA began 70 years ago as a gathering of three dozen Milwaukee, Wisconsin-area aviation enthusiasts. Led by former military aviator Paul Poberezny, these aviators, many of whom were designing and building their own airplanes, decided to start an airplane club. What started around a kitchen table on a cold winter night has grown into a worldwide organization with more than 270,000 members and 900 local chapters.

Aviation enthusiasts gathered at Curtiss-Wright Airport (now Timmerman Airport) in Milwaukee on January 26, 1953 to organize a group that would be named the Experimental Aircraft Association. [Courtesy: EAA]

“EAA’s founder, the late Paul Poberezny, often said that he never expected this little Milwaukee airplane club to grow into what it has become, but it tapped into a basic aspiration–the freedom to fly,” said Jack Pelton, EAA’s CEO and chairman of the board. “For seven decades, EAA has allowed people to passionately pursue that dream with imagination and innovation, as they found kindred spirits that created an aviation movement that has no equal in the history of manned flight. It is an anniversary to celebrate EAA as an achievement of the individual, as part of a greater group that supports those efforts.”

The organization began as a group of aviation enthusiasts who designed, built, restored, or modified aircraft, often working at their kitchen tables or in their basements or garages before moving out to the airport. This was decades before the invention of social media or the internet, so technical questions were answered face-to-face or over the telephone, and it was common to have EAA meetings at someone’s hangar so that members could see an aircraft under construction or to witness the all-important taxi tests and first flights.

Over the past 70 years, the organization has evolved beyond pilots and aircraft builders to welcome anyone with an interest in aviation—the focal point is AirVenture, the annual convention held in the summer in Oshkosh, Wisconsin.

Known simply as “Oshkosh” among the aviation-savvy, the week-long event attracts more than 10,000 aircraft and often more than 600,000 people from all over the world.

According to EAA Director of Communications Dick Knapinski, there will be events throughout the year leading up to the big celebration at AirVenture this summer. “We really want to celebrate the 70th anniversary at AirVenture when everyone is together during AirVenture week.”

This year AirVenture runs from July 25 to July 31.

What makes EAA special, says Knapinski, is that every member has the opportunity to make a difference inside the organization. AirVenture, for example, could not operate without the army of volunteers—often numbering more than 5,000—who do everything from driving trams, construction demonstrations, leading tours, and parking airplanes to picking up trash and making lunches for volunteers. Away from AirVenture, the volunteer spirit continues as EAA members act as technical counselors for pilots who are building aircraft to share the spirit of aviation with future pilots through the Young Eagles program.