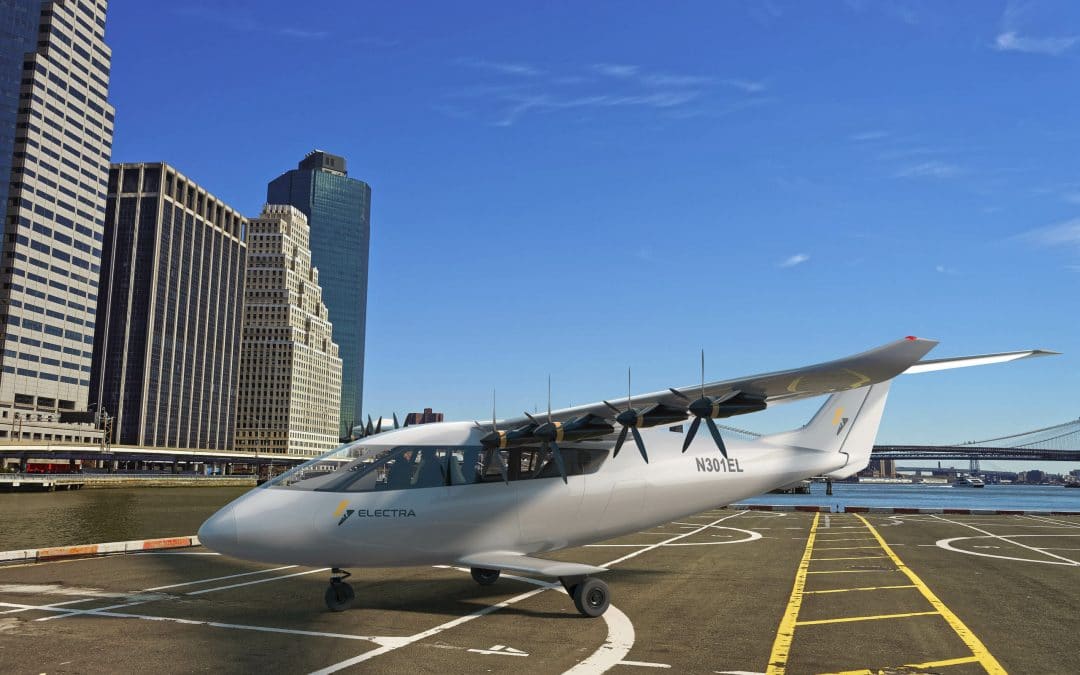 Electra—backed by NASA and the U.S. Air Force—says the deal opens the door to scale up faster in its mission to help decarbonize aviation. The California-based Airflow began three years ago as a startup by five former team members of the Airbus Vahana project to develop a prototype for a light electric vertical takeoff and landing (eVTOL) aircraft.

Electra has been developing a hybrid eSTOL aircraft that can take off and land within two vehicle lengths—which essentially allows the use of parking-lot sized spaces as potential landing and takeoff zones. “The approach we’re taking is to use the wing for the whole flight,” Electra CEO John Langford told FLYING Wednesday at this week’s UP.Summit in Bentonville, Arkansas.

“We think: Use the wing the way God intended wings to be used. Which is as a thrust multiplier, right? Essentially what the wing does is allow you to have a lot less thrust in your propulsion system than you have to have to lift something vertically. That’s power. That turns into energy in the system. So the efficiency is all on using a wing if you can.”

To achieve such short takeoffs and landings, the aircraft uses a blown-lift approach, “which is not new,” Langford said. “The idea of actively blowing the wing is something that’s been around from the ‘60s.”

Langford said it’s a concept that hasn’t been as useful in the past as it is now.

“The reason that you’ve never seen it in service, I think, is two things,” Langford said. “One is when you optimize on the really short endurance you do give up some cruise performance. For a really long-range mission like the Air Force was trying to do [in the 1970s] on the Advanced Medium STOL Transport [project], it turned out to be easier to spend on a longer runway for a lot of their applications. But with urban and regional air mobility (UAM/RAM) now your missions are short range, so you’re not trying to fly thousands of miles, you’re trying to fly dozens to hundreds of miles.”

The second reason, Langford said, is distributed electric propulsion works best with this concept, and it didn’t for traditional airplanes. “One of the places where electric does appear to make sense is distributed electric, where putting a lot of small propulsors along the leading edge of the wing is actually a job that electric does quite well, and it’s something that turbofans or pistons do very poorly.”

READ MORE: Why Are So Many Aviation Innovators Meeting in Arkansas?

The company says its technology delivers 2.5 times the payload and 10 times longer range, at 70 percent lower operating costs than “vertical alternatives.” The deal increases Electra’s order book to nearly 800 units, which the company says is beyond break-even for commercial development. The eSTOL will operate with sustainable aviation fuels (SAF), Electra says, burning a third less fuel than conventional aircraft.

Interestingly, Airflow comes to Electra with a strategic partnership in place with Plug Power (NASDAQ:PLUG)—which uses renewable energy to produce hydrogen fuel. Plug Power aims to produce 500 tons of green hydrogen daily by 2025. There’s no word on whether Electra has plans to develop aircraft powered by hydrogen fuel cells.