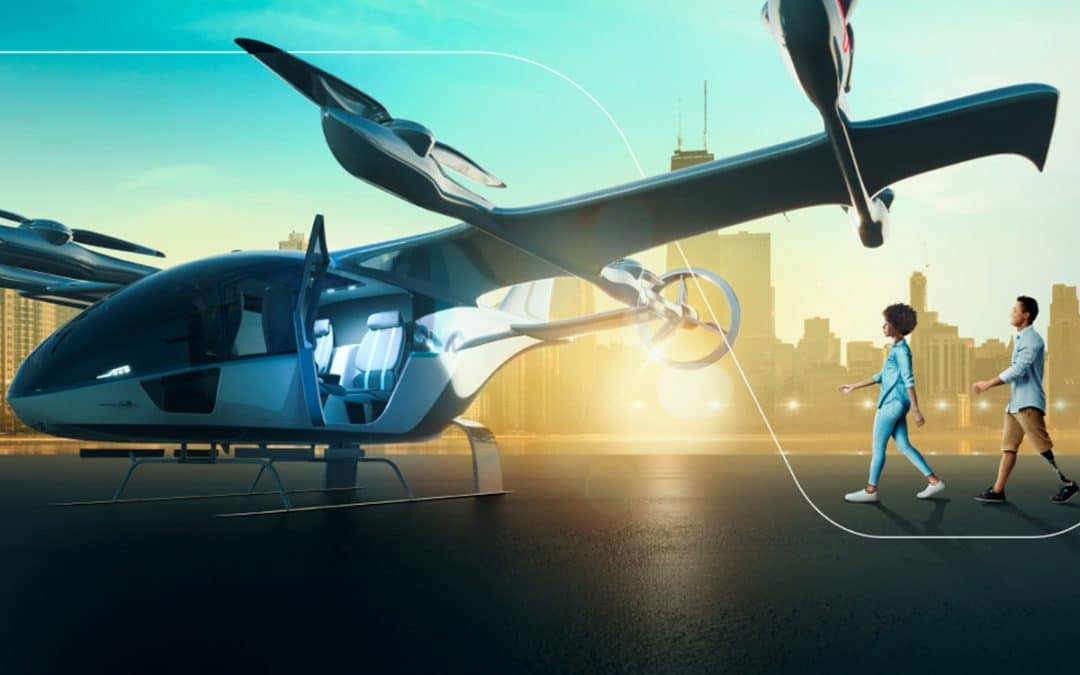 As part of its Chicago XP program running through the end of September, Eve and Blade (NASDAQ: BLDE) are flying simulated air taxi commuter routes from three Chicago-area heliports. On the ground, passengers can use tablets outfitted with special software to view how Eve’s aircraft and a vertiport would appear during future operations.

The company plans to use data from the simulations to study requirements for eVTOL air taxi operations and infrastructure, as well as passenger services.

Eve is among dozens of companies working to develop a fully-electric air taxi that promises a quick, convenient, environmentally friendly form of urban transportation for short flights over traffic gridlock. Eve says its air taxi could be ready to enter service as soon as 2026.

It estimates the Chicago area has the potential to support a total fleet of 240 eVTOLS flying 150 routes along with 20 vertiports for takeoffs, landings, and operational maintenance. By 2035, Eve estimates Chicago air taxis could generate a yearly revenue of about $222 million.

“We foresee several flights during the day—more than one pilot per aircraft at the beginning of the operation,” Eve vice president of services and fleet operations Luiz Mauad told FLYING. But it’s early in the development of the eVTOL industry and too soon to estimate how many pilots would be needed.

The emerging air taxi industry promises to create a career path for a new generation of pilots.

“Flying air taxis could be an important part of a more sustainable solution to the pilot shortage, as long as simplified-aircraft-operation aircraft don’t short circuit that as a path to building flight time to reaching hiring minimums,” Rod Rakic, a downtown Chicago resident and regional airline pilot told FLYING Tuesday. “Air taxis could offer a sustainable path to getting to 1,500 hours, at real scale. Which would be far superior than shoving everyone we can into the right seat as a CFI.”

Rakic is a regional airline pilot, with more than 500 hours in Embraer ERJ-175s and also serves as COO at EZ Aerospace, which studies advanced air mobility for clients, including the U.S. Air Force.

Blade is providing helicopter flights for Chicago XP, priced at $95—a price point that Eve says would be similar to expected fares in 2026, when Eve projects its air taxis will enter service.

Chicago XP passengers can book flights on Eve’s website, board at one of the three meeting points, and then experience the eVTOL’s augmented reality experience during the helicopter flight. The three heliports taking part in the project include downtown Chicago, Tinley Park, and Schaumburg villages.

During September, Eve and Blade are flying commuter routes between three locations in the Chicago-metro area. [Courtesy: Eve]

Eve is gathering data from the simulations to further understand the airspace, the passenger journey, and the vehicle journey with a goal to “make this industry very efficient in the future,” Mauad said. Analysts are tracking passenger times and movements and getting feedback from passengers about the flights.

Feedback from the Chicago simulations will also help Eve put final design touches aimed at improving the passenger experience, Mauad said, including details like the size of the air taxi windows.

Rakic, who belongs to a flying club in Schaumburg, said options for potential air taxi landing locations in Chicago are severely limited. “Today the only vertiport available isn’t really downtown, it’s west of all the places people actually want to go, and the lakefront isn’t suddenly going to get more landing areas.”

Rakic suggests reopening Chicago’s Meigs Field, which closed in 2003, would provide a solution. “The reality is that regional air mobility (RAM) will have a much broader impact in the near term than with the technology we can expect to see anytime soon.”

“So far, it’s going very, very well,” Mauad said about the Chicago air taxi simulations. Since September 14, Eve has flown 60 to 65 passengers as part of the project. “They’re giving us good feedback about the future.”