Explore the Eclectic Vibes of Asheville 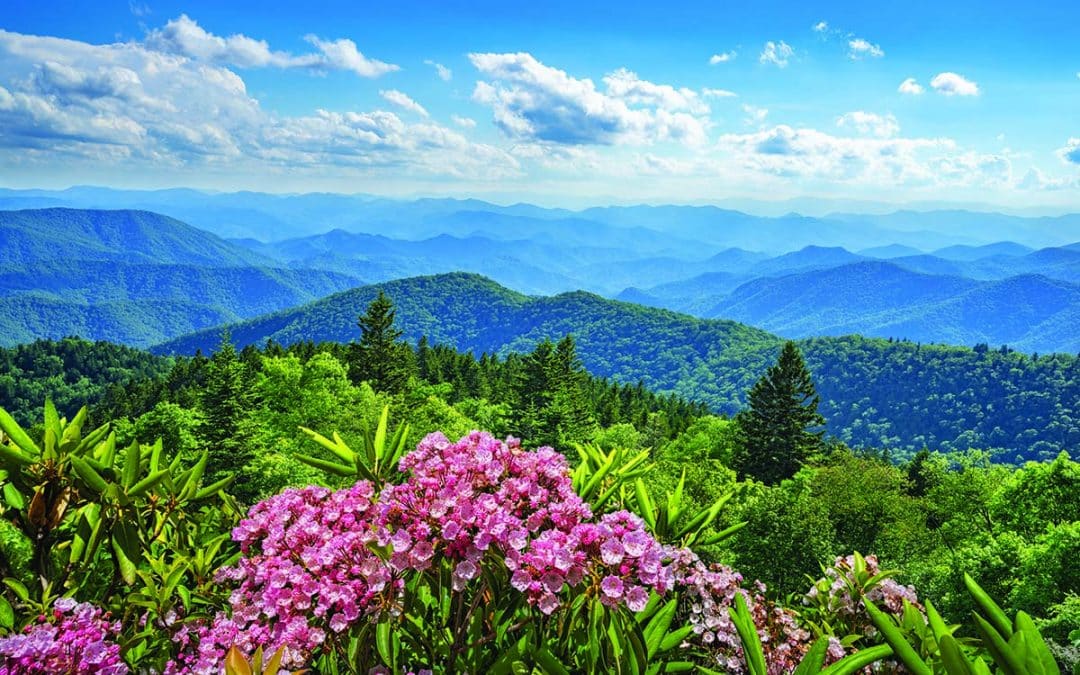 When most people think of Asheville, North Carolina, they think of the famous Biltmore Estate—America’s largest private home turned tourist attraction. But this scenic city in the Blue Ridge Mountains is also a growing aviation manufacturing center. In 2014, GE Aviation opened a 170,000-square-foot additive manufacturing plant there, next to its existing rotating parts facility. The new plant makes jet engine components out of ceramic matrix composite (CMC) materials, a lighter, and thus more fuel-efficient alternative to using metal alloys. Aircraft engine manufacturer Pratt & Whitney will join GE in Asheville at the end of 2022, when its new 1.2 million square-foot facility is complete.

Asheville is located in the center of North Carolina’s mountain region at the confluence of the French Broad and Swannanoa rivers in the southern Appalachian mountains. Given its elevation (2,200 feet) and location, it’s a great place to visit year-round to experience all four seasons. Summers are warm and humid with July reaching average highs of 84 degrees Fahrenheit. January, being the coldest month of the year, has average lows of 27 degrees F and average highs of 44 degrees F.

The Asheville area is well known for its bountiful supply of waterfalls. [Credit: Adobe Stock]

The steep rocky peaks surrounding the city range from 4,000 to almost 7,000 feet in elevation, creating a hikers’ mecca. With several ski slopes in the area, Asheville is also a great jumping off point for winter sports.

A popular site for geological study, the rocks in the area tell a complete story of the evolution of continents. Scientists estimate the majority of the region’s stones to be more than 1 billion years old to about 500 million years old, with the “youngest” rocks being at least 200 million years old.

At close to 6,000 feet, the highest point on the Blue Ridge is Grandfather Mountain. Southwest of Asheville are the Great Smoky Mountains and several other mountain ranges. To the northwest are the Bald Mountains and the Black Mountains, which include Mount Mitchell—the tallest mountain east of the Mississippi River at 6,684 feet. From Mount Mitchell, backpackers can access the Mountains-to-Sea State Trail. Added to the state park system in 2000, the trail stretches 1,175 miles from the Great Smoky Mountains to the Outer Banks, passes through 37 counties and four national parks, and connects to 10 state parks.

But you don’t need to hike for miles to enjoy the great outdoors of western North Carolina. Near Asheville there are trails of varying distances and for all skill levels. The most traveled paths reward hikers with gorgeous views—and sometimes a misting from a waterfall or a refreshing plunge in a natural pool.

There are, literally, hundreds of waterfalls in the area. Just 25 minutes from the city, you’ll find Skinny Dip Falls, where a half-mile trail leads to multiple pools fed by cascades. It’s no surprise it’s a favorite local swimming spot; however, bring your swimsuit. Despite the name, clothing is not optional.

The Biltmore Estate includes 8,000 acres of gardens and grounds to explore. The estate has 20 miles of trails, a winery, and offers tours of the historic George and Edith Vanderbilt home. [Credit: Adobe Stock]

A little farther from the city in Pisgah National Forest, you can take a short hike to or view the 75-foot Looking Glass Falls from a roadside observation point. And, from Asheville, it’s just 65 miles to the Great Smoky Mountains, which has waterfalls galore. One trail in the Smokies leads you past three waterfalls: Deep Creek, Indian, and Tom’s Branch falls. Looking for a scenic drive and not quite as much walking? A trip to Chimney Rock State Park, located 25 miles from downtown, rewards those willing to climb 500 steps to the top of a towering stone overlook that offers views of up to 75 miles on clear days. Geologists estimate the Chimney Rock monolith to be 500 million years old.

There are so many trails to choose from in the Asheville area that you might want to use a hike search website or app to help you narrow your options. There are several with skill-level and other preference-based filters that can assist you in this task.

You can find a more organized outdoor experience at the Adventure Center of Asheville, which offers ziplining, a treetop challenge course, and mountain biking. The center’s Kolo Bike Park has 4 miles of trails to test your endurance and balance skills. Designed to be progressive, there’s a designated kids bike playground and trails for beginners to experts. Features include “step downs, tabletops, road gaps, drops, and transfers,” according to the website. When it gets warm in the summer, the French Broad River, which runs right through the city, is a popular spot to tube or paddle. You can float past the Biltmore Estate and through the heart of Asheville’s River Arts District on trips that range from 3 to 12 miles coordinated by French Broad Outfitters.

A more active sport, fly fishing, is also a favorite activity for visitors. Nearby, the Nantahala and Pisgah National Forests offer streams that are plentiful with trout, small and large-mouth bass, crappie, and sunfish.

Another favorite outdoor (and indoor) diversion is the Biltmore Estate. From early April through the end of May, the estate celebrates Biltmore Blooms. Guests can wander the property’s 8,000 acres of gardens and grounds and enjoy its colorful variety of carefully curated flowers and plants. The estate also has 20 miles of trails, a winery, and offers tours of the historic George and Edith Vanderbilt home.

Given its modest population of 94,000, Asheville has a surprisingly large number of cultural centers and museums. But in light of the city’s history of celebrating and preserving the arts, as well as craftsmanship, it makes perfect sense. In fact, the Asheville Museum of Art was established in 1948 and is the third oldest art museum in the state.

Today, the region’s appreciation for art and culture is just as prominent. Local artisans are known for demonstrating their skills and techniques, many of which are distinctive to the Appalachian region.

The city’s River Arts District, a revitalized industrial area, is a great place to visit to see artists in action. The 2-square-mile district has 23 buildings and is home to 200-plus working artists. You can peruse the studios of potters, sculptors, painters, glassblowers, photographers, jewelry makers, and other artisans, most of whom are happy to answer your questions. At the North Carolina Glass Center, you can watch glass blowing demonstrations and make your own glass work with guidance from a professional artist. Nearby, the Odyssey Center for Ceramic Arts offers classes and workshops as well.

For a different kind of interactive experience, visit the Asheville Pinball Museum. It has 35 working pinball machines that you can play for a price, and serves food and drink. Another Asheville museum honors the life and works of author Thomas Wolfe.

As an aviator, you will enjoy the Western North Carolina Air Museum. Located about 25 miles south of Asheville in the city of Hendersonville, the museum has a 1927 WACO 10, a 1915 Sopwith Baby replica, a 1915 Morane Saulnier N, and several other historic aircraft.

Asheville has something for music fans, as well. Both the Asheville Symphony Orchestra and the Moog Factory call the city home. Known for revolutionizing music with the invention of the synthesizer in 1964, Bob Moog opened the factory here in 2002. It offers tours and allows visitors to experiment with its synthesizers.

Asheville is well known for its breweries too. In fact, it has the most breweries per capita in the U.S. With roughly 100 local beers and 40 breweries, it has earned its nickname as “Beer City USA.” The city hosts many annual beer festivals, including the NC Small Batch Festival in April, Asheville Beer Week at the end of May to early June, Beer City Festival in May, Burning Can Festival in August, Tour de Fat in September, North Carolina Beer Month in October, and more.

To learn about Asheville’s history, take a stroll along the city’s Urban Trail, which winds past 30 interpretive placards that narrate historical moments and celebrate the achievements of individuals with deep ties to the region. Famous local people featured on the trail include: George Vanderbilt II, a philanthropist and founder of the Biltmore Estate; E.W. Grove, a real estate developer who established the six-story Grove Park Inn in 1912—now an Omni property and luxury hotel; plus authors Thomas Wolfe, F. Scott Fitzgerald, and O. Henry; and Douglas Ellington, an Art Deco architect. The No. 1 placard is located at Asheville’s Pack Square, which is named for George Pack, who donated the land in 1900 to be used as a public park. A frequent scene for local festivals and gatherings, the park also contains the art deco City Hall, a Veterans’ Memorial, and other historic buildings.

The most notable historic building in the area is the Biltmore Estate. George Vanderbilt II, the youngest son of William Henry Vanderbilt and an heir to the Vanderbilt family fortune, first visited Asheville in 1887. A year later, he returned and started buying land for what would become his country estate. The 250-room French Renaissance-style chateau took six years to complete.

The post Explore the Eclectic Vibes of Asheville appeared first on FLYING Magazine.