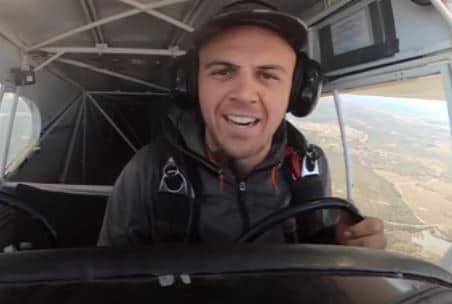 The FAA has revoked the pilot certificate of YouTuber Trevor Jacob, saying he operated his 1940 Taylorcraft in a “careless and reckless manner” during a highly viewed stunt that led to the loss of the aircraft in a California national forest last November.

In the 13-minute video titled “I Crashed My Airplane,” Jacob claimed the aircraft’s engine had quit, and he was forced to parachute to safety. The pilotless airplane went down in the Los Padres National Forest.

The heavily scrutinized video has had more than 1.7 million views.

According to a report in the Wall Street Journal, the FAA sent a letter to Jacob on April 11 informing him that he had violated FAR 91.13, which covers the operation of an aircraft in “careless or reckless manner so as to endanger the life or property of another.”

Jacob, a former Olympic snowboarder, has stated on his YouTube channel that he will not comment on the airplane issue on the advice of his attorney.

Jacobs, a private pilot, had recently purchased the aircraft—a Taylorcraft BL-65—and according to several reports in local newspapers, there is some question as to whether the aircraft was airworthy at the time of the flight, as it needed maintenance.

The video shot during the flight shows Jacob’s reaction to the loss of engine power. Although there is a camera mounted inside the cockpit that faces the panel, there are no shots of the panel that show the position of the throttle or mixture knobs, or the position of the magneto switch at the time of the power loss or after.

Cameras mounted on the left wing and tail captured video of the cockpit. Jacob had a handheld camera mounted on a selfie stick as he bailed out. As he fell away from the aircraft, he kept the camera pointed on his face.

The video was posted to YouTube on December 23. Immediately, there was speculation in the aviation community that the engine failure was a fake and a part of a publicity stunt.

The video and Jacob’s decision-making skills were heavily scrutinized. For example, it was noted that there was a flat, open area in the distance. Ostensibly, Jacob could have attempted an emergency landing in that area instead of jumping from the aircraft.

Additionally, the video shows what appears to be a significant amount of fuel in the header tank of the aircraft, as shown by the tube fuel gauge atop the cowling, and a freeze frame of Jacob’s separation from the aircraft shows a cylindrical object strapped to his left calf—under his pant leg—that has the same dimensions as a fire extinguisher. Although fire extinguishers are often carried aboard aircraft, they are usually not worn strapped to the pilot’s body.

Jacob sustained minor injuries in the form of a few cuts and bruises from landing in the brush. He videoed himself hiking out, talking about the benefit of wearing a parachute, stating that he always wears one when he flies. However, a search of his other flying videos show this statement to be incorrect.

The wreckage of the aircraft was allegedly recovered by Jacob a few days after he reported the accident to the National Transportation Safety Board (NTSB) and the FAA.

The NTSB normally does not investigate unscheduled off-airport landings of vintage light aircraft unless there is a failure of a flight-control system, damage to something other than the aircraft in excess of $25,000, or serious injuries as the result of the accident. However, the board made an exception in this case.

If it is determined that the aircraft was unairworthy at the time of the flight and there was no ferry permit, the FAA could impose more sanctions against Jacob.

For more information, pilots can reference the NTSB report by its file number: [WPR22LA049.link]