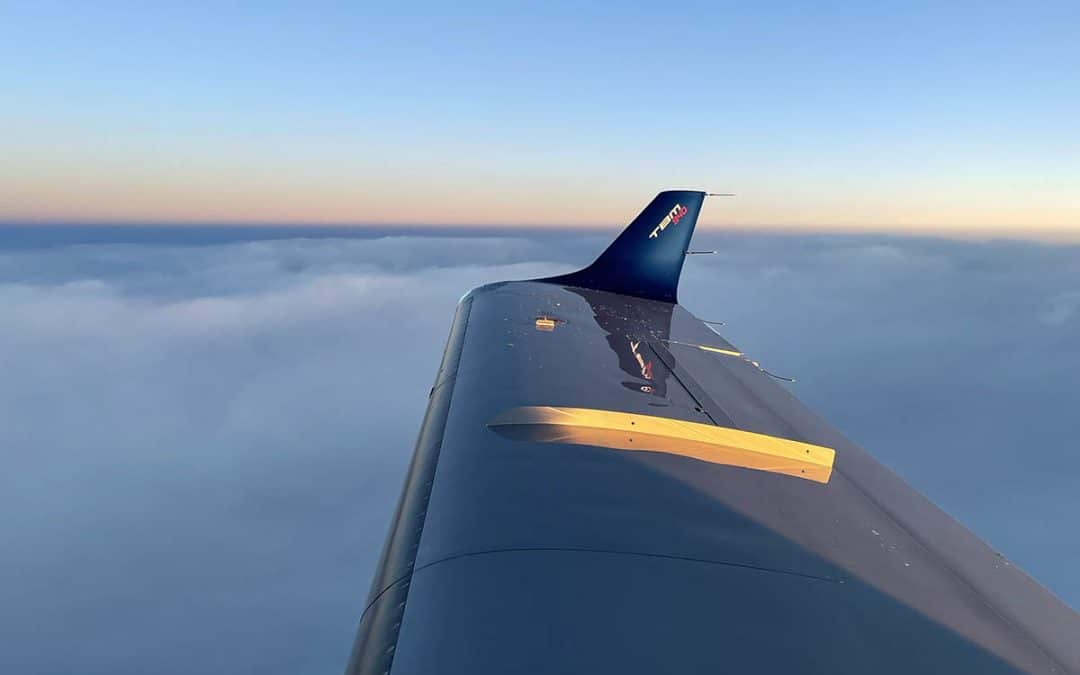 Editor’s Note: This article is part of a three-part series on the Daher TBM 960. Read more about the aircraft and the manufacturing process behind Daher’s flagship TBM series.

It was an incredible invitation. Daher and veteran ferry pilot Margrit Waltz asked me to join her on the flight that would bring serial No. 1400, a 940—from its final position in the hangars at Daher in Tarbes (LFBT) across the Atlantic Ocean to Columbia Aviation, in Groton, Connecticut (KGON).

When an owner in the U.S. purchases a new TBM, normally flight-test profiles are flown under a French temporary registration. Immediately prior to rolling out the door, the designated representative hangs the FAA airworthiness certificate upon the airplane, blessing it with a November registration to help facilitate the transfer of ownership upon arrival in the States.

With the airplane “sealed” following this approval, only required crew can enter it. Any uncertainty I’d felt about the trip ahead melted away as I was recognized as part of that crew—and allowed to board for a briefing on aircraft systems before we launched.

The route from Tarbes to Groton was planned for November to take advantage of a window of high pressure, clear skies, and light traffic when clearing customs. [Illustration: Joel Kimmel]

Our course took us from southwestern France to Wick (EGPC), in the far north of Scotland, then to Keflavik, Iceland (BIKF)—with any luck—on the first day.

Ferry pilots fly adhering to routines—and often with a lucky charm or two. Waltz’s chosen talisman for the trip turned out to be perfect for me as well: a St. Francis doll knitted for her by a friend in Portugal.

But it’s the airplane itself that proves the most worthy companion. Briefing myself on the 940’s POH, I hit upon section 3.6, Emergency Descents, and noted the maximum range profile. At 120 kias from FL 310, we could glide up to 70 nm before reaching sea level. This was no longer an abstract chart to remember.

READ MORE: For a Ferry Pilot, Routine Is Good

On departure—as we punched up through the gray woolen layers hanging over Tarbes—it was TBM’s climb performance that impressed me first. To maximize our time at the altitude for optimal speed westbound—FL 280—Margrit put us into a climb at best rate: 124 kias. In a well-coupled airplane, best glide and best rate often intersect—so there’s a symmetry. With an outside air temperature of minus 29 degrees Celsius climbing through 23,000 feet, she kept 98 percent torque up front at 1,650 fpm.

It’s common for ferry pilots to travel with a ‘good luck’ talisman of sorts. Margrit Waltz is no exception. The St. Francis doll a friend had knitted for her made the crossing along with us. [Credit: Julie Boatman]

We’d climb on the first leg when in clear air with the inertial separator off. I’d register the sensation when it was on, as it made a soft whomp periodically with the heartbeat of the engine. I’d come to know the PT6’s sounds well, with the luxury of time in getting to know the airplane. Not because we were moving slowly—au contraire—we’d trip along around 315 to 322 ktas at OATs from minus 30 degrees C to minus 50 degrees C at FL 280. But the five legs of the mission spanned 15 hours even at that speed.

READ MORE: A Flight by the Numbers

At Wick’s John O’Groats Airport, we had our first taste of it with a serious crosswind at around the published limit—but the TBM allows the pilot to manage quite a bit. While we enjoyed a cup of tea served up by Adrienne Foster at Far North Aviation, we couldn’t sample a wee dram of the town’s proprietary Scotch—nor take any with us—as supply chain woes had descended upon this remote outpost of the Highlands. But I found photos of friends on the walls, and a charming library dedicated to a local World War II hero.

Mid-November doesn’t strike most pilots as an optimum time to fly across the North Atlantic. They would be correct. The objective hazards rise: strong westerly winds, the certainty of icing in the clouds, and brutally cold temperatures that await you in the air and on the ramp. And, a serious lack of daylight.

To counteract these negatives, you have the possibility for a window of high pressure similar to the one we enjoyed, if you can stand a little frigid time on icy asphalt in Keflavik and Iqaluit (CYFB)—where the blast of wind felt like iron stakes driving through us as we ran from the airplane to the fueler’s shack for a break. You’ll find the reward of clear skies and not much other traffic competing with you as you clear customs in Iceland, Canada, and the U.S.

The cabin of the TBM stays comfortable, however, even though when I press my fingers to the glass as we cross Greenland, the cold sends a shiver through me. The comfort’s at least in part because of the heated seats, which I grew to appreciate even as their warmth had to reach us through the protective layers we had over them and on us for the ferry flight.

On the ramp at Keflavik, Iceland, we prepare for the longest overwater crossing ahead as the sun breaks the dawn. [Credit: Julie Boatman]

On the leg to Wick, we had transitory ITT HI caution lights blocked in yellow on the MFD’s engine information column when the internal turbine temperature clicked above 820 degrees C for a few moments. With an adjustment of power, the CAS messages went away.

That was the only light that drew our attention—until we were on climbout from Iqaluit.

Isn’t that the way it always goes? You’ve ticked off 75 percent of the miles on a long cross-country, you’re comfortable, the “hard” overwater part is over. But the universe often throws up a reminder about who’s really in charge. Transitioning through 5,000 feet, the red master warning light chimed on and the annunciator on the CAS beamed in red: DOOR, indicating that one of the 940’s doors might not be correctly latched.

Waltz leveled off—and since we were not yet to an altitude at which the pressurization differential would be significant, we investigated the state of the main cabin door.

One operating methodology that she has learned over years of flying the TBM series helped her to isolate the issue quickly. Since the DOOR CAS message doesn’t indicate which door is triggering the warning, it’s up to the pilot to determine if the warning pertains to the optional pilot’s side door or the main cabin door.

On the descent into Groton, into the sunset, the author and Waltz smile back on 15 hours of flying and great stories. [Credit: Julie Boatman]

After we loaded the airplane in Tarbes and took our seats on the flight deck, Waltz closed the pilot door and did not open it again for the remainder of the trip—we used only the main cabin door. That way, if a DOOR message illuminated, she would be nearly 100 percent certain the issue was with the main cabin door.

Following a minor jiggle to the mechanism, the trigger reset for us, and we vigilantly monitored the system as we continued on.

A quick stop in Bangor, Maine (KBGR), gave us the opportunity to clear U.S. Customs and ensure the import paperwork for the 940 was in order. As we filled up on vending machine snacks, another ferry pilot moving eastbound sought us out. He clearly needed a listening ear.

We already knew our good fortune in bringing a brand-new turboprop across the pond. He represented the more common side of the business, ferrying a deeply used twin Cessna from the Midwest to eastern Europe. He wore the haggards of his position behind the eight ball already, sharing tales of a broken heater, doubt about the aging instruments and radios in the panel, and pressure from the new owners who paid him peanuts to take the risks ahead. They don’t understand the hazards, he said, as he walked through the calculus of “Should I stay or should I go?” to our sympathetic nods. I watched for the N-number on FlightAware for the next few days. He pressed on. I was relieved to see the aircraft make its intended destination.

The author snaps a picture of sunset over Massachusetts, one of several sunsets enjoyed on the Atlantic crossing. [Credit: Julie Boatman]

Railing Across the Cape

We had smooth sailing ahead on the final leg—the shortest of the trip. We raced the sunset as we skirted Boston’s airspace. Little did I know Margrit had a plan for our final approach.

“You haven’t yet seen the TBM’s incredible descent rate,” she said, calling Boston Approach to advise them we would be expediting our trip down when they cleared us out of 16,000 feet. She pitched the nose over, and the vertical speed indicator pegged at somewhere between 3,500 and 4,000 fpm down.
The 940 rode as if on rails, and the Cape stretched out ahead of us in the evening light. Boston saw our descent rate and anticipated our desire not to level off until we reached 4,000 feet msl over the strong arm of Massachusetts.

We laughed together in sheer pleasure—I could hear it later in the video I took from my phone—as she turned the corner towards Groton and landed with a reassuring and satisfying touchdown. A mission completed in a marvelous machine.

The TBM 940 on the ramp at Columbia Aviation in Groton, Connecticut, awaiting its new owner. [Credit: Stephen Yeates]