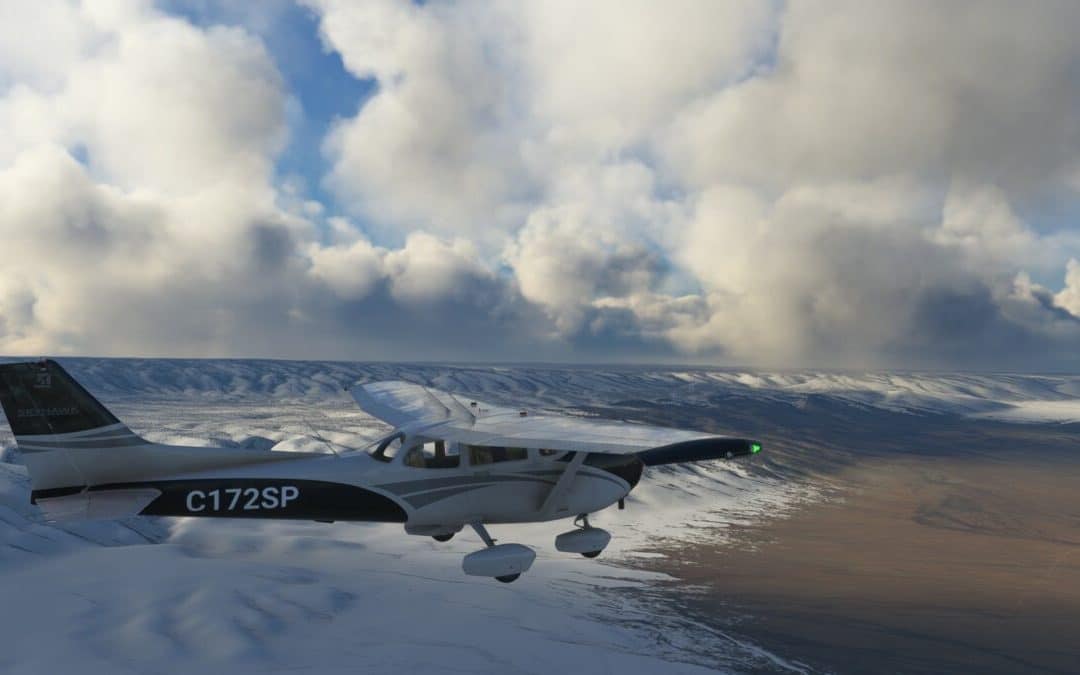 Ever since discovering the Microsoft Flight Simulator on floppy disk, way back in the early 1980s, I was hooked. The gray and white screens before me—accompanied by a “tick tick tick tick” sound of a mighty Cessna 182RG’s 180 hp engine—was intoxicating. I could actually fly a real flight from point A to B somewhere near Chicago.

From the bustling city (shown with two huge skyscrapers) down to the rural farmlands of Champaign, Illinois, I think it was a 30-minute journey. This adventuring was something I felt a great sense of accomplishment with, and it kept this teenager quite busy and engaged when other friends at that age were usually bored or lost doing nothing.

This sparked my interest in real flying, and at the age of 13, I started taking flying lessons at the local airport near my home. Only one or two lessons per month for fun, as I certainly had a few years to go before I could solo, but what I learned on the simulator I transferred easily to the Cessna 150 that rattled along inches from my face.

The simulator didn’t prepare me for the smells, the turbulence, and the pure exhaustion I felt after taking lessons on sunny, thermal-filled days. This part frustrated me and often led to nausea. However, over time, I overcame that misery in my young pilot’s life.

A few years later, after entering college, I started serious flight training, with the instrument, commercial, and eventually CFI hours racking up. In my downtime, I was in my off-campus housing with an old 8086 computer running MSFS 2.0 with some purple, gray, black, and white graphics. The IFR lessons blazed by as I was able to replicate everything in the simulator that I saw before me in the real aircraft. Back then, any PC flight sim was chastised by the “old codgers” that taught us—yet I knew differently.

The lack of feel on a desktop sim was actually a benefit. It made you trust your instruments even more and made you realize if you didn’t, you’d be in a heap of trouble. The lack of motion was a sense of constant “vertigo” in a way; it made you work even harder than being in a full motion simulator or real airplane where some motion could be viewed as a “cheat” when learning to trust your instruments, scan and look for problems developing.

Now more than 35 years later and some 11,000 hours of safe piloting, and finally getting that “dream job” of commanding some pretty cool corporate jets, I’ve got to say the simulator hobby of mine has not only been a great ride, but also a huge part of my success today.

I see the fidelity in the Level D sims I’m a part of every six months, and where they lack the quality of today’s desktop pc simulators. I am speaking specifically about Microsoft Flight Simulator 2020, which is now more than two years old. In my wildest dreams as that 13-year-old kid, I never thought I would see the day when the entire world was laid out in photorealistic fashion. The reality is here, and I couldn’t be more excited. The benefit to real pilots willing to take on this hobby is extreme. For not a lot of money—or perhaps for a lot of money (real aircraft hardware specific to any airplane out there is readily available), you’ll get the same benefits. Fly anything, anywhere, anytime, in real world weather with real topography, live traffic, and more. You can flight sim your real flight hours earlier to verify winds aloft, the local terrain layout, how the airport is tilted, the approaches, or just about anything. Since this simulator was born, checking out the most challenging airports I frequent in real life was a must.

For my first example of how this sim can benefit any pilot, I’ll start with the majority of what FLYING readers probably know and have spent their flying time with. The basic, standard prop machine. For this example, I grabbed one of the many free, detailed aircraft—in this case, a pretty late model Cessna 172 equipped with the Garmin G1000.

Let’s take a real trip from Grand Canyon National Park Airport (KGCN) to Kanab Municipal Airport, Utah (KKNB). In worldwide live weather, there’s no choice. And in showcasing this beautiful sim, the live weather proved a bit of an issue.

Cold temperatures of 10 degrees F, scattered cumulus, and show showers prevailed along the way. I was prepared, but not entirely so. Pitot heat on, preflight checks, and away we go. At 8,500 feet, VFR suddenly became IFR. Up to 9,500 feet then, in and out of cold-soaked clouds. This is not entirely a safe idea. I was busy navigating and programming the GPS, when I looked up to see my entire windshield glazed over. The horror! Thinking quickly, I came to the conclusion I may have to make a landing like this, as the Cessna has no window heat. I put on defroster knobs and cabin heat, hoping this would do the trick. As I approached Kanab, I started getting nervous. This was a fine mess I had gotten myself in (quoting Oliver Hardy).

This is where this sim shines—if this were in real life, how would I solve the problem? How would I prevent the holes of Swiss cheese from aligning just right for disaster?

Ok, let’s see, the window can be opened. Boom, a rush of loud air hit me, and bone-chilling cold. With the window open, I could easily stick my head out and see where I was going. In the sim, all you have to do is move your viewing spot to the window, slightly down and outside, and save a quick spot view key. Once done, I could toggle between the normal captain view and this newly formed landing view out the window.

Concerned with icing, flying quality, and increasing stall speed (the sim will replicate all this in a frighteningly fast way I’ll tell ya), I decided not to add flaps, to approach at about 90 knots, and let her down gently onto the plowed runway. Gazing ahead with glances into the main panel to watch speed and VSI, I screamed over the runway at 90 knots, cut the power, and felt a sudden bang. We were down. Fast. No floating, no nothing. What a great experience and learning tool that became apparent when writing this piece, totally unexpectedly! A life lesson—and if the flight was an actual one instead of simulated—a real “I Learned About Flying from That” story.

I hope you can see, in this one tiny snippet, how a desktop sim can not only make you think like a pilot and solve a problem before it becomes dangerous, but can exercise a skill set that you could take with you into the skies.