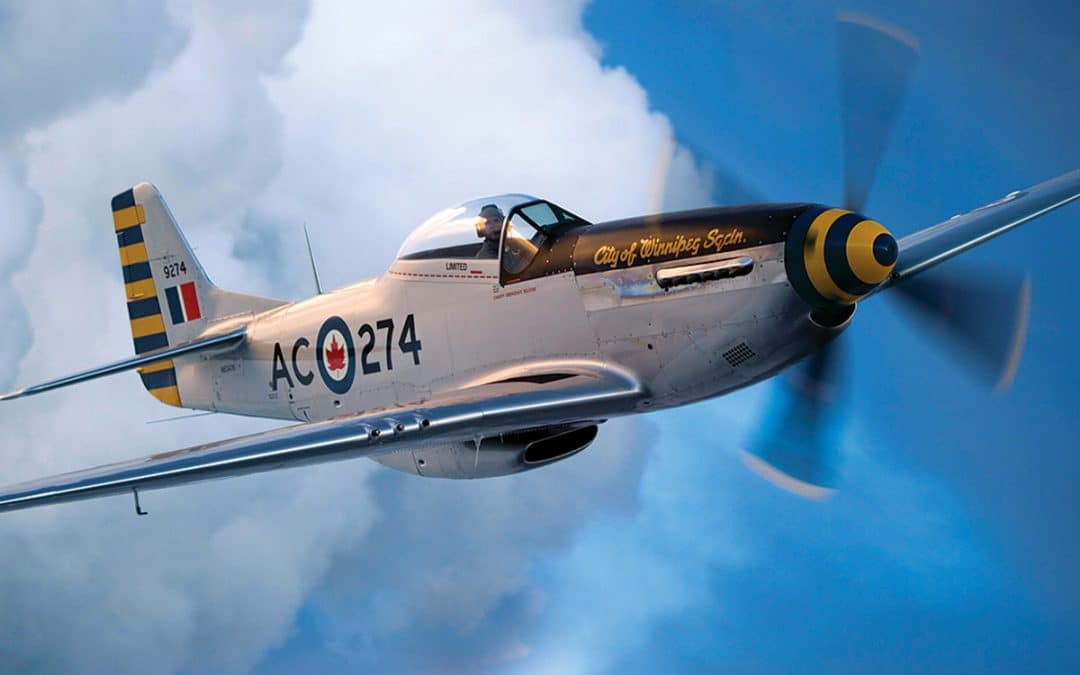 Considered the finest combat fighter of its generation, the P-51 Mustang long-range fighter and fighter-bomber mastered the skies during World War II and the Korean War.

U.S.-based aircraft manufacturer North American Aviation originally designed and produced the P-51 Mustang for use by the British Royal Air Force (RAF) in World War II. A single-seat, single-engine fighter, the P-51 (“P” for pursuit) became a key aircraft for the U.S. Army Air Forces (USAAF). The P-51 is widely regarded by many aviation historians as the finest all-around piston-engined fighter of World War II that was produced in significant numbers.

North American designed a trim fighter with a low-drag, streamlined wing, as well as an efficient low-drag engine-cooling system that gave the P-51 exceptional speed and range.

The British agreed, and NAA completed the prototype NA-73X airframe on September 9, 1940—a scant 102 days after the contract was signed—and flew it for the first time on October 26. North American began mass production in May 1941, and squadrons of P-51s began RAF combat operations in April 1942.

The new airplane had a maximum speed of nearly 390 mph (339 knots) and its combat range was about 750 miles (652 nm). When outfitted with external drop tanks, the P-51’s range was extended to 1,375 miles (1,195 nm). The Mustang was powered by the liquid-cooled Allison V-1710 engine, which had limited high-altitude performance. This was the P-51’s major flaw; it restricted the aircraft to operations below 15,000 feet. (Later turbocharged versions of the Allison engine improved this performance significantly.)

A member of the Women Airforce Service Pilots (WASP) at the controls of a P-51. [Courtesy: aviation-history.com]

After receiving the first Mustangs, the British experimented, fitting several P-51s with the Rolls-Royce Merlin engine, which proved far superior to the Allison engines the aircraft had been equipped with. The Merlin’s efficient mechanical two-speed, dual-stage supercharger allowed the new fighter to perform at higher altitudes.

The Merlin engine was manufactured under license in the United States by the Packard Motor Company; North American quickly switched engines in the P-51 it was building. By the summer of 1943 Merlin-powered P-51B/C (Mustang Mk III) models were rolling off the North American assembly line.

The new engines transformed the Mustang’s performance at altitudes above 15,000 feet—without sacrificing range. The Merlin-powered Mustangs were able to compete with the best German fighters in the skies.

Nearly 1,500 Merlin-powered Mustangs were employed by the RAF for daylight missions over Europe. The most widely produced version was the P-51D, which was used by the RAF and USAAF. The P-51D had a Plexiglas “bubble” canopy, which vastly improved the pilot’s all-around vision. The airplane’s maximum speed was 440 mph, and unlike earlier versions, it had an operating ceiling of almost 42,000 feet. Armed with six wing-mounted 0.50-inch machine guns, the P-51D also was equipped with hard points below each wing, allowing it to also be fitted with 500-pound bombs or 4.5-inch rocket launchers. The bombs and rockets improved the airplane’s capabilities as a close-air support platform.

Starting in the spring of 1945, newer versions of the Mustang were designed for extremely long-range operations. These were used in the Pacific Theater and were flown to Japan from bases in the Mariana Islands.

There was also the F-6—a photo-reconnaissance version of the Mustang. The F-6 was used by the USAAF and RAF in all theaters of the war. However, unlike P-38 versions that were used for photo-reconnaissance missions, the F-6 maintained its armament because it was used mainly in low-altitude operations where it might have to defend itself.

Although the P-51 was very well-liked by its pilots, the airplane was not perfect. Key issues included control problems that occurred following the careless transfer of fuel (which could result in an out-of-tolerance center of gravity). Secondly, the liquid-cooled engine was equipped with an exposed coolant jacket, radiators, and tubing. These were much more vulnerable to battle damage than aircraft with air-cooled radial engines.

The definitive version of the Mustang—the P-51D—was equipped with a Packard V-1650-7, a license-built version of the two-speed, two-stage-supercharged Merlin 66. In addition, the P-51D had six 0.50 caliber AN/M2 Browning machine guns.

A member of the Tuskegee Airmen and a ground crewman. [Courtesy: aviation-history.com]

For example, in October 1943, more than 9 percent of the 8th Air Force bombers that were credited with attacking their targets failed to return to base; an additional 45.6 percent of the bombers suffered battle damage.

The introduction of the P-51D in mid-December 1943 was a game-changer for the USAAF. Serving as a high-performance, high-altitude, long-range fighter, the new Mustangs were capable of escorting bombers to Berlin and back. Equipped with jettisonable drop tanks, the P-51Ds had an operational range of more than 1,600 miles.

The Mustangs rapidly established supremacy over Germany’s best fighters—the Messerschmitt Me-109 and the Focke-Wulf Fw-190—particularly above 20,000 feet. By March 1944, additional P-51s had been delivered; in combination with drop tank-equipped P-47 Thunderbolts and P-38s, the American bombers were much better protected during their daylight missions over Germany.

By February 1944, the “Mighty 8th’s” aircraft and crew losses fell to 3.5 percent, while fewer than 30 percent were damaged in battle. Because of the heightened protection, the USAAF and the RAF were able to conduct round-the-clock bombardment of enemy targets. Although there were fewer P-51s than other fighters, they were able to penetrate deeper into German airspace and were also more capable in air-to-air combat.

Over time, the numerical superiority of the USAAF fighters, the flying characteristics of the P-51 and American pilot proficiency helped to cripple the Luftwaffe’s remaining fighter force. Therefore, the German fighter threat to U.S. (and later British) bombers was significantly diminished by July 1944. The RAF, which had been using night bombing to protect its bombers and their crews, was able to resume daylight bombing in the second half of 1944 because of the diminished threat from the Luftwaffe.

Due primarily to their role in Europe, the P-51 was not deployed in the Pacific Theater until late 1944; they were used for close-support and escort missions, as well as tactical photo-reconnaissance.

As the need for fighter escorts in Europe diminished, more P-51s were shipped to the Pacific. Following the capture of Iwo Jima, Mustang fighters of the 7th Fighter Command were stationed there beginning in March 1945. They were used to escort Boeing B-29 Superfortresses in missions against the home islands of Japan.

Post-war and the Korean War

By the end of World War II, the general consensus was that P-51D Mustangs were the most capable fighter airplanes in the U.S. and British arsenals.

Following the war, the USAAF consolidated its wartime combat force, selling or scrapping much of its air fleets. However, it selected the P-51 as its “standard” piston-powered fighter; the P-38 and P-47 were withdrawn from service or given substantially reduced roles.

By 1950, the more advanced F-80 and F-84 jet fighters were being introduced into service. Although Mustangs continued in Air Force service, the majority of F-51s were relegated to secondary duties. Many were placed in storage, while some were transferred to the Air Force Reserve and the ANG.

However, when the Korean War broke out in late June 1950, the F-51 Mustang proved useful once again. Stored or in-service F-51Ds were shipped via aircraft carriers to the combat zone. They were used by the Air Force, the South African Air Force, and the Republic of Korea Air Force (ROKAF).

The F-51 was used primarily for ground attack missions (fitted with rockets and bombs) and photo-reconnaissance missions in Korea, rather than as interceptors or fighters per se. However, F-51s were useful after the initial North Korean invasion, because Air Force units were forced to fly from their bases in Japan. The F-51Ds, with their longer range and endurance, were able to attack targets in Korea that the shorter range F-80 jets could not.

Because of the F-51s’ vulnerable liquid cooling systems, they sustained significant losses from ground fire. Nonetheless, F-51 Mustangs flew with Air Force and ROKAF fighter-bomber units on close support and interdiction missions until 1953. At that time, they were generally replaced as fighter-bombers by Air Force F-84s and by U.S. Navy Grumman F9F Panthers.

Following the Korean War, F-51s continued to be flown in the Air Force Reserve and ANG for several years. The last American Air Force Mustang was an F-51D, which was withdrawn from service with the West Virginia Air National Guard in January 1957.

In the European Theater during World War II, controlling the air proved the key to controlling the ground. The long-range P-51 Mustang fighter helped secure the Allied victory by enabling the resumption of strategic bombing after heavy losses suffered by unescorted bombers in 1942 and 1943.

Starting in late 1943, P-51Bs and P-51Cs (supplemented by P-51Ds beginning in mid-1944) were used by the USAAF’s 8th Air Force to escort bombers in raids over Germany. Meanwhile, the RAF’s Second Tactical Air Force and the USAAF’s 9th Air Force used Merlin-powered Mustangs as fighter-bombers, which helped ensure Allied air superiority in 1944. In addition, P-51s were used by Allied air forces in the North African, Mediterranean, Italian, and Pacific theaters of war.

Despite the introduction of jet fighters, the Mustang remained in service with some air forces until the early 1980s.

FLYING Classics thanks Encyclopedia Britannica, the National World War II Museum, mustangsmustangs.com, the Museum of the United States Air Force, and others for information and photographs used in this article.