Flying Through a Wisconsin Winter 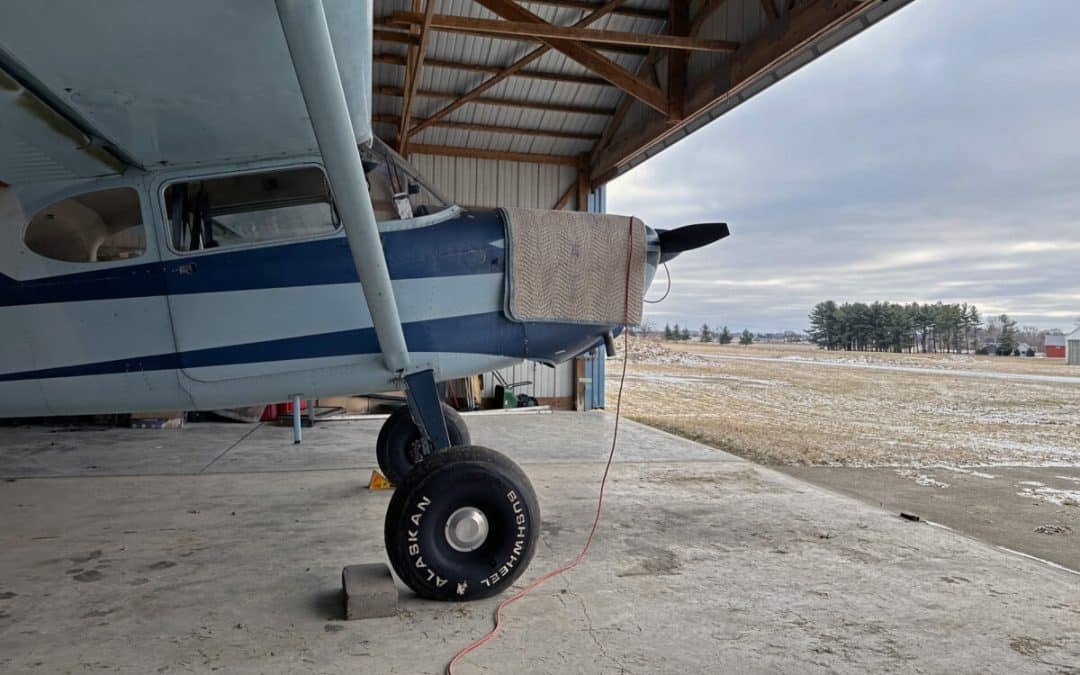 Winter is officially here in Wisconsin, and for the foreseeable future, the aircraft ownership experience will be defined by frigid temperatures, biting winds, and ever-changing ice and snow cover. Weeks of blank gray skies and dreary landscapes will occasionally become punctuated by blindingly vivid blue and white scenes, temperatures and density altitudes will both occasionally go negative, and Wisconsin citizens everywhere will break out their finest flannel ensembles.

As this is the first winter in which I can fly my airplane without the complications of major engine maintenance, I’m free to stumble through winter ownership unhindered by anything beyond general inexperience. One by one, I’m learning lessons and discovering solutions that collectively make winter flying more fun, and I’ve compiled a few products and lessons that have stood out thus far.

Up here in the frozen north, a well-heated, fully-insulated hangar is the stuff of dreams. Owning such a hangar is the Wisconsin equivalent of owning an oceanside villa in Monaco—it’s pricey, exclusive, and instantly makes you the envy of your circle of friends. My friend Jim has a hangar like this, complete with a mini fridge, a sectional couch, and enough cool wall decor to make you dread going home.

Most of us keep our machines in primitive, unheated T-hangars that may or may not be completely sealed from the elements. It’s not lost on me that this is a good problem to have; even basic hangars are palaces compared to outdoor tie-downs. Nevertheless, those of us in unheated hangars are presented with a few challenges, and for us, an engine preheater is a wise investment.

The basic premise of any engine heater is simple; using forced air or electric elements, they heat an engine compartment or components of the engine itself, warming engine oil and easing engine starts. In addition to expediting engine (and cabin) warmup, this reduces engine wear and increases engine longevity.

Engine preheating generally comes in two forms. The cheaper and simpler option consists of small portable heaters with ducting to direct the heat into the engine compartment. While these are often the less expensive option, they also introduce more of a fire hazard.

Should an unattended portable heater malfunction, or should the ductwork become dislodged, piping-hot air can be redirected onto surfaces and components that react poorly to such temperatures. Many people use these systems successfully throughout the winter, but I am haunted by the idea of being responsible for a hangar fire that may claim multiple airplanes.

A number of companies manufacture dedicated preheat kits that are installed directly onto the engine. Accordingly, there are fewer ways in which they can malfunction and create a fire hazard. This was one of the main reasons I chose this option, and I went with a company called Reiff. Only after my system was installed did I learn the company is based only about 30 miles away from me, in rural Wisconsin.

Reiff offers two main types of preheat kits; the least expensive utilizes a single heating element to warm the oil pan, and the best kits add a heating element to each cylinder, effectively warming the entire engine. I opted for the latter, reasoning that consistent, uniform engine heating is beneficial.

A local maintenance facility took 3.5 hours to install the $950 system. Provided I remember to plug the engine in the night before I want to fly, I’m now greeted with a very warm engine and an easy start for every flight.

Last Saturday morning, my friend Jim and I hatched a wonderful plan. Temperatures were in the 30s, the ceiling had lifted to around 2,500 feet, and the local lakes had 6 to 8 inches of solid ice coverage. Wisconsinites everywhere were out frolicking on the ice, partaking in everything from ice fishing to ice boat racing to paraskiing.

In past winters, I’ve joined Jim as a passenger for some ice landings, and this was finally my chance to fly along with him in an airplane of my own. My airplane was running well, I was familiar with the area, and best of all, Jim could serve as the guinea pig, landing first to ensure there were no issues with the ice surface.

There was only one issue—my engine was cold-soaked. Because our plans had come together at the last minute, I hadn’t plugged my engine in to warm it up. I agreed to go anyway, hoping I’d get it started in spite of this.

Unfortunately, it was not to be. A combination of ice-cold temperatures and my overpriming seemed to offend the engine, and despite catching and running roughly for a moment here and there, it simply refused to start. I ended up pushing the airplane back into the hangar and joining Jim as a passenger once again.

After we returned, a nearby hangar tenant offered to lend me his portable Diehard brand battery charger, a robust unit capable of trickle charging and quick charging. I set it up overnight, and it effortlessly brought my tired battery back up to a 100 percent charge. Having experienced how useful the charger was, I ordered one the following day and am now prepared to solve future battery issues independently.

In hindsight, it seems like an obvious item to add to the list of necessary hangar accessories, but in my case, I first needed to experience a major inconvenience to take the idea seriously.

This one is still on my wish list. I presently own a massively overbuilt tow bar that appears to have been engineered for Douglas DC-9s, and up until this past summer, it has worked reasonably well to pull my airplane around.

Then I installed some 26-inch tundra tires.

Set to only 8 to 10 psi, the new tires are pillowy soft. They make landing on rough surfaces a breeze, and they make the airplane feel like a big Tonka truck, shrugging off my blundering landings without a second thought. But they also make it far more difficult to pull the airplane into and out of the hangar, even on concrete.

Even the most massive, robust tow bars leave something to be desired when unseen patches of ice are scattered around the ramp. [Courtesy: Jason McDowell]

At first, I chalked this up to a badly-needed fitness opportunity. I’d simply hunker down, put my weight into it, and muscle the airplane around as needed while burning off some burger- and cheese-curd-induced calories. But after winter weather set in, a close call with an unseen patch of ice nearly sent me to the ground, and visions of my recent rib-breaking refueling incident scared me straight and inspired me to shop for a powered tug.

Initial research suggests that there is little middle ground when it comes to powered tugs. On one end of the spectrum, you’ve got used Frankentug specials available on classified sites. These contraptions may or may not work properly, they will likely date back to the Clinton administration, and whether they’re gas or electric, they’ll almost certainly be covered in decades of grime. But they’re cheap, ranging from around $500 to $1,500.

On the other end of the spectrum, you’ve got companies like Best Tugs. Starting at around $3,000, their tugs work perfectly. They’re reliable, quiet, and rather than looking like you’re involved in a wrestling match with an angry snowblower, you can enjoy buttery-smooth fingertip control before and after every flight.

The price is hard to swallow, though. Were I definitely remaining in my location long term, I’d consider hitting up an adjacent hangar tenant for a partnership opportunity in which we share one nice tug. That way, we’d each be able to enjoy the luxury anytime for half the price.

For now, I stubbornly continue to scour the local classifieds in the hopes that a decent used Frankentug happens to become available. But then again, the upgrade to that Best Tug would amount to less than the cost of one of my tundra tires…and it certainly would be a lot less expensive than another hospital stay.

The post Flying Through a Wisconsin Winter appeared first on FLYING Magazine.